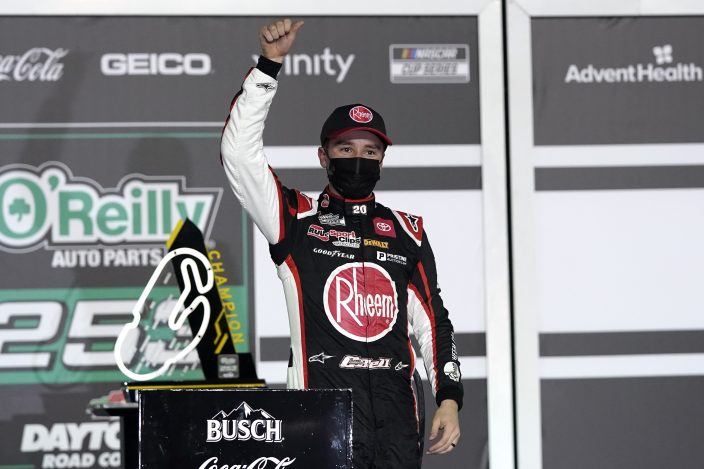 Fast facts: Denny Hamlin, the only driver to finish in the top five in both races run in 2021, leads the point standings by 12 over Logano, who has been in position to win each of the first two races, but has failed to cash in. ... Kevin Harvick is third, followed by Bell and reigning series champion Chase Elliott. ... Elliott led a race-high 45 laps on the road course but finished 21st. ... Michael McDowell, who won the Daytona 500, finished eighth. This is just the third time the series has started a season with a pair of first-time winners.

Last race: Ty Gibbs became the sixth driver in history to win his first career start in the series, taking the lead on a restart in overtime and cruising to a comfortable victory on the Daytona road course.

Fast facts: Gibbs, 18 and the grandson of team owner Joe Gibbs, also became the youngest driver to win on a road course in the series. Austin Cindric, at 20, had been the youngest. ... Cindric, the reigning series champion, leads again after two races and is one of two drivers with two top-five finishes. Jeb Burton is the other and sixth in points. ... Burton's cousin, Harrison Burton, is second, already 24 points behind Cindric, followed by Daniel Hemric, Brandon Brown and Myatt Snyder.

Last race: Ben Rhodes made it two wins in as many races this year, holding off 2020 series champion Sheldon Creed over three overtime restarts on Daytona's road course.

Last race: Lewis Hamilton completed his sixth championship season in seven years even though Max Verstappen held off the Mercedes duo of Hamilton and Valterri Bottas for his second victory of the season.

AUTO RACING: NASCAR heads to Texas as finale draws near