Democratic Sen. Joe Manchin, chair of the Senate Energy and Natural Resources Committee, said Wednesday that he will vote for New Mexico Rep. Deb Haaland to serve as interior secretary, clearing the way for her likely approval as the first Native American to head a Cabinet agency.

Manchin, a moderate from West Virginia, had been publicly undecided through two days of hearings on Haaland's nomination by President Joe Biden. Manchin caused a political uproar last week by announcing plans to oppose Biden’s choice for budget director, Neera Tanden, a crucial defection that could sink her nomination in the evenly divided Senate.

By contrast, Manchin said Haaland had earned his vote, despite disagreements over drilling on federal lands and the Keystone XL oil pipeline. 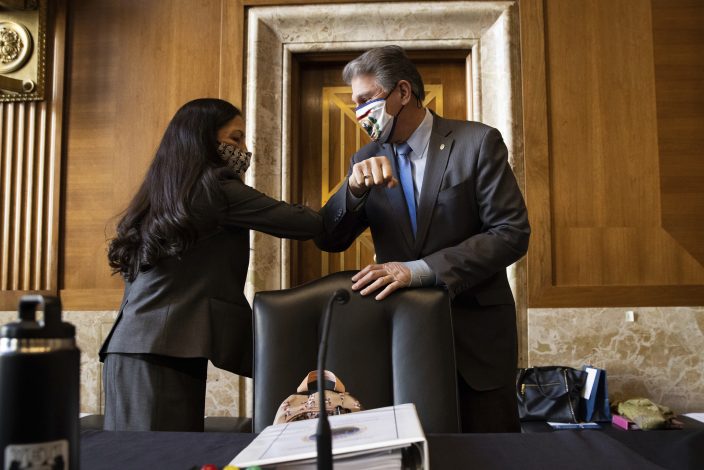 Sen. Joe Manchin, D-W.Va., greets Rep. Deb Haaland, D-N.M., before the start of the Senate Committee on Energy and Natural Resources hearing on her nomination to be Interior Secretary, Tuesday, Feb. 23, 2021 on Capitol Hill in Washington. (Graeme JenningsPool via AP)

“While we do not agree on every issue, she reaffirmed her strong commitment to bipartisanship, addressing the diverse needs of our country and maintaining our nation’s energy independence,'' Manchin said in a statement.

Manchin also said he was pleased that Haaland, during hearings this week, said the Biden administration is committed to continuing to use fossil fuels “for years to come, even as we transition to a cleaner energy future through innovation, not elimination." 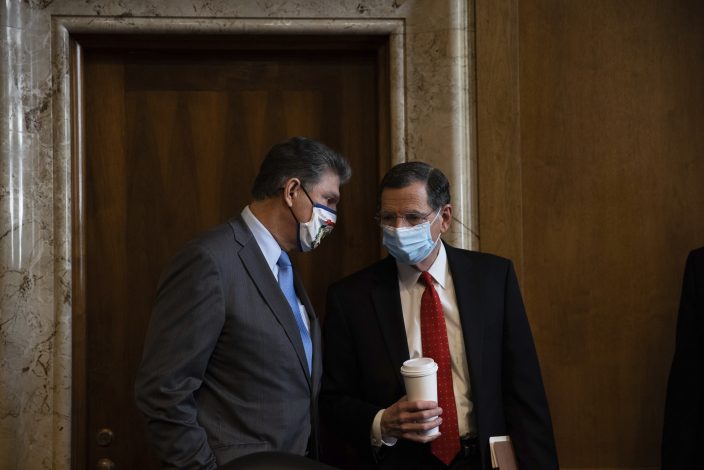 Sen. Joe Manchin, D-W.Va., speaks with Sen. John Barrasso, R-Wyo., during the Senate Committee on Energy and Natural Resources hearing on the nomination of Rep. Deb Haaland, D-N.M., to be Interior Secretary, Tuesday, Feb. 23, 2021 on Capitol Hill in Washington. (Graeme JenningsPool via AP)

Manchin, a longtime coal industry defender, leads a committee that is crucial to Biden’s efforts to address climate change but has expressed skepticism about some of the actions advocates say are needed to reduce harmful greenhouse gas emissions that contribute to global warming. He has stressed the need for the Biden administration to create clean-energy jobs to replace jobs likely to be lost in the transition away from coal, oil and natural gas.

Manchin's announcement came as Republicans denounced Haaland, saying her opposition to fracking, Keystone XL and other issues made her unfit to serve in a role in which she will oversee energy development on vast swaths of federal lands, mostly in the West, as well as offshore drilling in the Gulf of Mexico and Alaska.

“We should not undermine American energy production and we should not hurt our own economy, yet that is precisely what the Biden administration is doing," through a moratorium on oil and gas leases on federal lands, said Wyoming Sen. John Barrasso, the senior Republican on the Senate energy panel.

The leasing moratorium, signed by Biden last month and supported by Haaland, "is taking a sledgehammer to Western states’ economies,'' Barrasso said, and could result in as many as 33,000 workers losing their jobs in Wyoming. An additional 62,000 workers in Haaland's home state of New Mexico also are at risk, he said.

Barrasso and other Republicans also bemoaned Biden's rejection of the Keystone XL pipeline from Canada to the U.S. Gulf Coast, saying thousands of jobs will be lost and a friendly source of oil left idle. Haaland said under questioning Wednesday that she supports Biden's decision and stressed that she will be following his agenda at the Interior Department — not her own.

Manchin said he was pleased that Haaland had made clear her commitment to extending a program to clean up abandoned coal mines across the country, including West Virginia.

Several Republican senators, including Alaska's Lisa Murkowski, a former Senate energy chair, have not revealed how they will vote on Haaland's nomination, though it appears likely most Republicans will oppose her.

Sen. Steve Daines, R-Mont., called Haaland “a hard-line ideologue with radical views out of touch with Montana and the West.'' He cited her opposition to Keystone XL and statements she made before her nomination calling for a ban on fracking. Daines tangled with Haaland at her confirmation hearing over her previous opposition to trapping on public lands and her support for continued federal protections for grizzly bears.

He asked Haaland why she co-sponsored a bill to continue grizzly bear protections “when the science tells us the bear numbers are well above the recovery targets" set by the Endangered Species Act.

“I imagine, at the time, I was caring about the bears,” Haaland replied. She later said she "would be happy to take a look at that issue” with Daines.

Collins to back Haaland for Interior, sealing her approval