Yankees pitcher Domingo Germán gave a public apology Wednesday for actions that led to a lengthy suspension under Major League Baseball’s domestic violence policy, a day after he spoke with New York teammates and admitted he had engaged in dangerous conduct.

Speaking softly and dabbing his eyes at times, Germán said through a translator he wanted “to sincerely apologize to the Steinbrenner family, my teammates, the front office and those around me who love me. I have made mistakes of which I’m not proud of.”

The 28-year-old has been welcomed by teammates but also faced wariness as he attempts to regain a place in the starting rotation. 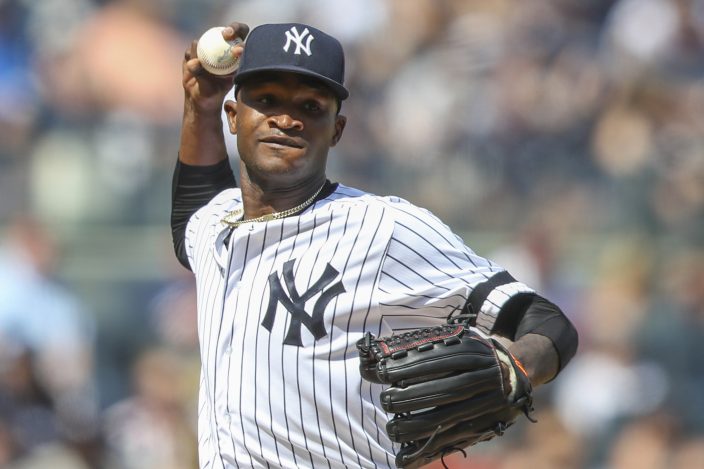 FILE - In this Aug. 31, 2019, file photo, New York Yankees pitcher Domingo German throws to first in a pickoff-attempt during the fifth inning of a baseball game against the Oakland Athletics in New York. German has started the process of talking to teammates about his domestic violence suspension that has kept him off the mound since September 2019. (AP PhotoMary Altaffer, File)

“He messed up in life,” first baseman Luke Voit said. “I don’t know the things he did. You always get a second chance at this. We have his back. But he’s skating on thin ice, and he needs to get his life together. And I think he’s doing the right steps to do so. But, again, he’s got to prove to us that he can do that.”

Germán was placed on administrative leave on Sept. 19, 2019 while MLB investigated an alleged domestic violence incident involving his girlfriend, with whom he has at least one child.

Germán missed the final nine games of the 2019 regular season and all nine of New York’s postseason games, then on Jan. 2, 2020, was suspended for 63 games. He missed the entire pandemic-shortened 2020 season and the playoffs. He returned to the Yankees last week for the start of spring training.

“I was able to speak to each player on the team yesterday. The only acceptable way to begin to move forward was to address them face to face,” Germán said during a Zoom news conference from the Yankees minor league complex in Tampa, Florida, speaking in Spanish with a translator at his side. “What I told the team: There are a lot of young players who wear this uniform and I want them to understand the great damage that can be done when mistakes like mine have been made.”

Giancarlo Stanton thought it was a positive exchange.

“It was very smart to address to the team, just to get it out there, get it in the room and move forward from here,” he said. “It was definitely a big mistake he made, and he understands that. At the same time, it’s, ‘What are you doing to do with that mistake?’”

“When my team needed me the most in 2019 before we started the playoffs, I wasn’t there for them. And for that, I ask your forgiveness,” he said. “It was very difficult for me not to be pitching and helping my team. Having to watch from afar, hurt me a lot. But I also understand I am responsible for putting myself in that position.”

“He has done enough to earn the opportunity to be here and to compete and to be a part of this team,” Boone said. “Now, the proof is in the daily life that he leads. And we’re certainly going to do all we can to support him and help him to become the best version of himself possible.”

“They have always sincerely tried to help me. When I was going through my worst moment, they were there,” Germán said. “We had a great conversation. And for that I will be eternally grateful to them. I need to show them through my actions how committed I am to re-establishing myself as a contributor to this team.”

Germán underwent mandatory counseling, which he said was beneficial.

He also addressed his social media account. He wrote last week in Spanish: “Everything is over” then deleted his posts and wrote: “I’m ready.” He said he was trying to convey the suspension period was behind him and was trying to dedicate it as a thank you to his partner, with whom he remains together.

“Regarding social media, I understand that I have not used it in an appropriate way. I have caused a lot of confusion,” he said. “And although my reason has been to connect with fans, I must do it in a better way. It is clear that I must improve on that.”

Germán would not discuss the events that led to his suspension.

“I don’t think I want to get into the fine details of what happened that night,” he said.

Germán said his actions and behavior will show he is safe for his partner to be around.

“We talked about it a lot, many, many, many times. And we’ve promised to each other not to go through something like this ever again,” he said. “And I think that has been the best way for us to really get through all this and creating a safe environment, is just communicating and understanding each other in a better way.”

Germán said he had not spoken directly with owner Hal Steinbrenner. He said he understood why Yankees reliever Zack Britton said last week: “I think sometimes you don’t get to control who your teammates are.”

“He gave me really good advice, which I’m thankful for,” Germán said, recounting a discussion in which the pitcher told him the comments “were not to be taken personal, more on a professional level.”

Germán wants to be available to younger teammates for advice.

“I can talk to them in specific details on how you can find yourself in the best time of your professional career and how all of a sudden all can change from one night to the other,” he said.

Germán said he learned “the biggest thing is about how do you react to certain things? How do you make certain decisions in your life when things are tough? I’m a public figure. I play with this team, this well-known organization throughout the world. How do I know how to behave in the best way possible to represent everybody here?”

“It was very smart to address to the team, just to get it out there, get it in the room and move forward from here,” Stanton said. “It was definitely a big mistake he made, and he understands that. At the same time, it’s what are you doing to do with that mistake?”

Boone said Germán has been crisp in bullpens but can’t be compared with his 2019 form.

“A year-and-a-half ago when he was at the top of his game,” Boone said. “There’s nothing that suggests he can’t get back to that point, to being that kind of player. But I would also caution that we’re very early in the game as far as him working his way back. But so far I’ve liked what I’ve seen.”