The PGA Tour without Tiger Woods was always inevitable purely because of age. His shattered right leg from his SUV flipping down a hill on a sweeping road through coastal Los Angeles suburbs only brings that closer.

Golf wasn't ready Wednesday to contemplate the future of its biggest star after the 10th and most complicated surgery on the 45-year-old Woods. There was more relief that he was alive.

“Listen, when Tiger wants to talk about golf, we'll talk about golf,” Commissioner Jay Monahan said at the World Golf Championship in Florida. “When you're going to overcome what he needs to overcome, I think the love of all of our players and everybody out here, it's going to come forward in a big way and across the entire sporting world. 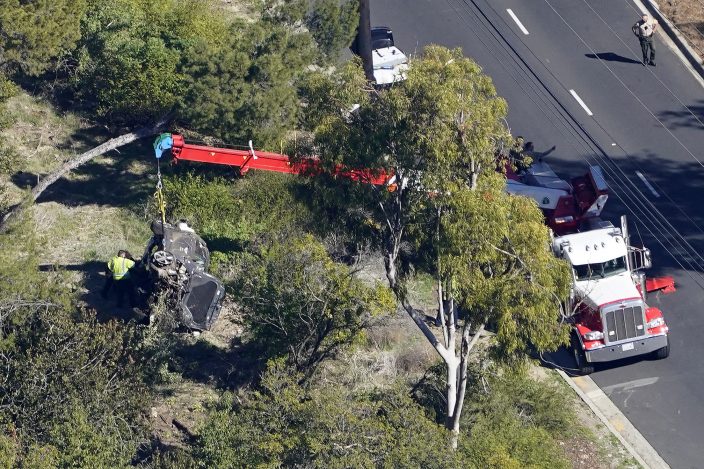 “I think he'll feel that energy and I think that's what we should all focus on.”

Woods made it clear what he faces with an update posted early Wednesday to social media by his team that outlined the “long surgical procedure” at Harbor-UCLA Medical Center.

Anish Mahajan, the chief medical officer, said Woods shattered tibia and fibula bones on his right leg in multiple locations. Those were stabilized by a rod in the tibia. He said a combination of screws and pins were used to stabilize additional injuries in the ankle and foot. 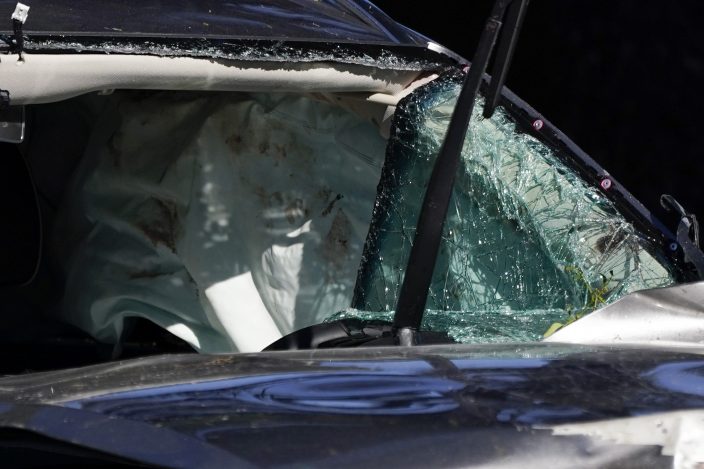 A vehicle is towed away from the site of a crash involving golfer Tiger Woods, Tuesday, Feb. 23, 2021, in the Rancho Palos Verdes suburb of Los Angeles. (AP PhotoAshley Landis)

Four previous surgeries to repair ligaments were done on the left knee. This is the first major trauma to the right leg. Woods has had five surgeries on his lower back in the last seven years. The most recent was in December, a microdiscectomy to remove a pressurized disk that was pinching a nerve.

“I would say, unfortunately, it's very, very unlikely that he returns to be a professional golfer after these injuries,” said Dr. Michael Gardner, chief of orthopedic trauma at Stanford Medical Center. “His age, his multiple back issues, this is going to be a very long road ahead if he chooses to attempt to return to his previous level of golfing.”

Can golf do without the player singularly responsible for its growth?

His watershed victory in the 1997 Masters sent media interest in golf soaring. More than just the first player of Black heritage in a green jacket, he won at a more prolific rate than anyone in history. The timing was impeccable, for the PGA Tour negotiated a television contract that made prize money spike.

Woods won his first tournament as a 20-year-old in the 1996 Las Vegas Invitational, where the total purse was $1.65 million. At the World Golf Championship this week, first place alone is worth $1.82 million.

Woods made everyone rich.

The PGA Tour has been down this road before.

Ten years ago, when Woods was still smarting from the sordid revelations of serial adultery and missed three months with more injuries, the PGA Tour negotiated a nine-year television deal with increased rights fees. There was no assurance Woods could get back to the top of his game.

Woods was playing a small schedule even when he was younger and healthier. He has never played more than 21 times in a year on the PGA Tour, which stages events in 46 weeks this season.

He also tends to return to the same courses. But when he plays, and there isn't a pandemic, no one needs to study TV ratings to measure his impact. Fans often stand six and seven rows deep behind tees and greens to get a look. No other player attracts that kind of attention. The top 10 in the world combined don't do that.

“It's always great when he plays at a tournament or is out here because it gives that tournament an extra dimension that it usually doesn’t,” four-time major champion Rory McIlroy said. “We were all sort of heading towards that day that Tiger wasn’t going to be a part of the game.”

Woods had only one top-10 finish last year, and that was before the pandemic. Even after golf returned, he waited an additional month to get started. He played only seven times since July and never cracked the top 35. He remains one victory short of his 83rd victory, which would set a PGA Tour record, the one most reasonable for him to break. That was before the crash.

McIlroy already has seen one comeback. He often talks about having lunch one day with Woods in Florida, right after Woods' fourth back surgery to fuse his lower spine. He saw the pain. And two years later, he saw Woods win the Masters for a fifth time, his 15th major.

“I don't want to take anything away from what Ben Hogan did after his car crash or any of the other comebacks that athletes have had in other sports, but right now I can’t think of any greater comeback in sports than the journey that he made from that lunch we had in 2017 to winning the Masters a couple years later,” McIlroy said.

Hogan threw himself in front of his wife right before they were struck by a Greyhound bus in 1949. He broke his pelvis, collarbone and left ankle, chipped a rib and had blood clots had left him with circulation problems the rest of his life. Hogan was 36 at the time.

What the future holds for Woods and for the tour is not anything players were ready to embrace.

“At this stage, I think everyone should just be grateful that he’s here, that he’s alive, that his kids haven’t lost their dad,” McIlroy said. “That’s the most important thing. Golf is so far from the equation right now, it’s not even on the map.”