Despite her status as the wife of the world’s most notorious drug boss, Joaquín “El Chapo” Guzmán, Emma Coronel Aispuro lived mostly in obscurity -- until her husband went to prison for life.

Then, suddenly, she was a presence on social media. There was talk of launching a fashion line. Even an appearance on a reality show dedicated to the families of drug traffickers.

Coronel’s actions did not go unnoticed. And in the wake of her arrest Monday on charges that she had conspired to distribute drugs, there were those who wondered: In embracing the limelight, had Coronel put a target on her own back? 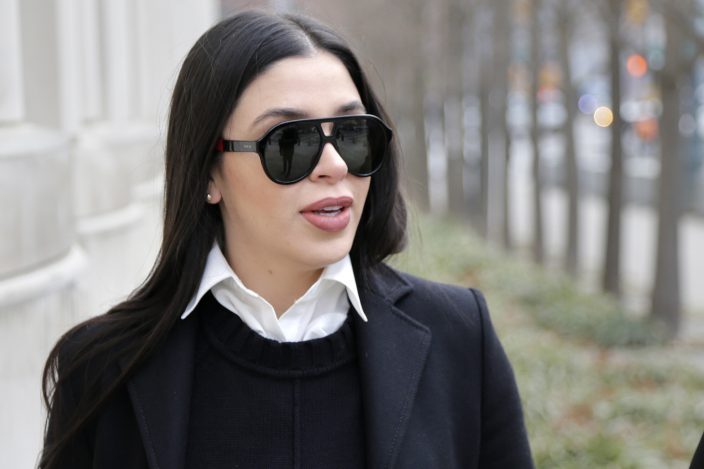 FILE - In this Dec. 6, 2018 file photo, Emma Coronel Aispuro, wife of Joaquin "El Chapo" Guzman, arrives to federal court in New York. Despite her status as the wife of the world’s most notorious drug boss, Coronel Aispuro lived mostly in obscurity -- until her husband went to prison for life. (AP PhotoSeth Wenig, File)

Her behavior was notable in part because she had lived a relatively sheltered life until her part in a grueling trial that drew international attention. But her actions violated unwritten rules about family members, especially wives, keeping a low profile.

Until the trial, “Emma had remained anonymous like practically all of partners of Sinaloa cartel capos,” said Adrián López, executive editor of Sinaloa’s Noroeste newspaper. Then, “she begins to take on more of a celebrity attitude. ... This breaks a tradition of secrecy and a style specifically within the leadership of the Sinaloa cartel.”

Late last year, the Mexican investigative journalist Anabel Hernández — who has written extensively about the Sinaloa cartel, including a 2019 book about the diary of cartel leader Ismael “El Mayo” Zambada’s son — said a source told her that Coronel’s mother, Blanca Aispuro, was worried about the turn her daughter’s life was taking. 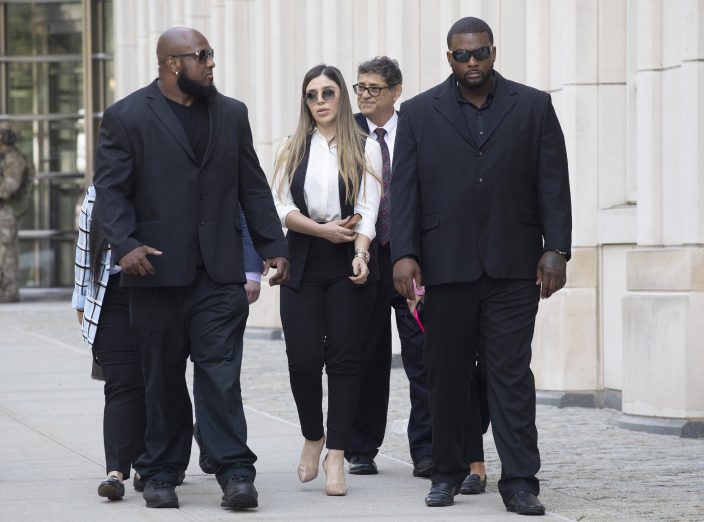 “Her mother was also worried that an enemy cartel could harm Emma because she was unleashed, was out in the street a lot, the clubs, excessive in her social life,” Hernández said the source told her. “Her mother worried something like that could happen or she could become a target of the government.”

Guzmán has been married numerous times; as was made clear in his trial in New York, he has been far from faithful. Sitting in the courtroom, Coronel heard a woman testify to how she and Guzmán made a dramatic escape from a middle-of-the-night raid on one of his hideouts by Mexican marines.

She described hopping out of bed, locating a secret hatch and running through a drainage tunnel, a naked Guzmán leading the way.

“Sometimes I loved him and sometimes I didn’t,” the woman said, tearfully.

Coronel was there each day smiling, blowing kisses to Guzmán, “but in reality they tell me that Emma was very, very mad and very hurt,” Hernández said. “And so, when the trial ended she decided to take revenge and the way to get revenge was to make her husband see what he was losing.”

Coronel, 31, was born in San Francisco, but grew up in the mountains of Durango bordering Guzmán’s Sinaloa state in an impoverished area known as the Golden Triangle.

She and Guzmán married in 2007 when she 18 years old. He was 50 and one of the world’s most powerful drug traffickers. “I don’t imagine she really had many options to say no, I won’t marry you,” Hernández said.

For years, Emma Coronel’s only public image was a photograph from 2007, when she was crowned the beauty queen of the festival in Canelas, the town where she grew up. She wore an enormous crown and a closed mouth smile, and looked directly at the camera.

After their wedding, she disappeared from public view until it was reported in 2011 that she had given birth to their twin daughters in Los Angeles County. On Feb. 22, 2014, she was with Guzmán and their daughters in the Pacific resort town of Mazatlan when he was captured by Mexican marines.

Guzmán was sent to the maximum security Altiplano prison outside Mexico City while his lawyers fought his extradition. On July 11, 2015, Guzmán escaped through a milelong tunnel that had been dug to the shower in his cell.

In January 2016, Mexican marines recaptured Guzman in Los Mochis, Sinaloa. The next month, Coronel gave her first ever interview to Hernández, complaining repeatedly about the conditions in which Guzmán was being held.

Coronel told Hernández she had learned of his escape from the Altiplano prison from television.

“If I had known something I wouldn’t have been able to sleep or eat from desperation,” she said. “I had no idea.”

Guzmán was extradited to the United States -- but not before Coronel was involved in planning yet another escape attempt that never came to fruition, U.S. prosecutors say.

Coronel and her designer wardrobe made a splash at the El Chapo trial. Photographers elbowed each other to capture her arrivals and departures.

At one point, she wore a burgundy velvet blazer that matched one she had sent to Guzmán to wear that day. Afterward, she commissioned a courtroom artist to recreate the show of solidarity -- a souvenir.

Coronel strode the courtroom confidently. She played with her hair while waiting for proceedings to start and chatted amicably with reporters sitting behind her. She carried crackers and cookies in her purse, sometimes offering snacks to reporters.

Every morning, Guzmán sought her out as he entered the courtroom. He smiled and waved hello.

One day she chatted and laughed in the courtroom with Mexican actor Alejandro Edda, who played Guzmán in the Netflix series “Narcos: México.” In the trial’s sixth week, she brought her 7-year-old twin daughters, dressed in matching jeans and white jackets; their father clapped to them softly, as if to play with them.

After Guzmán was convicted -- he would be sent away for life plus 30 years -- Coronel posted a statement thanking Guzmán’s attorneys, and her mother and sister for taking care of the twins while she was attending the trial.

She said the trial had been difficult. Her name had come up in testimony: Dámaso López, one of Guzmán’s former lieutenants, testified that he met several times with Coronel and Guzman’s sons to plan the drug boss’ escape from the Altiplano prison. And he said Coronel had relayed messages from her husband.

Coronel was unrepentant. “What I can only say about that is that I have nothing to be ashamed of,” she wrote. “I am not perfect but I consider myself a good human being and I have never hurt anyone intentionally.”

López, the editor of Noroeste, and Ismael Bojórquez, editor of Riodoce, a news outlet known for its investigations into Sinaloa’s underworld, both expressed shock that Coronel had traveled to and from the U.S. after the trial.

Hernández suspects U.S. authorities noticed Coronel’s change in lifestyle and spotted an opportunity to pressure her at a moment when she may be more open to betraying her husband.

Although Coronel has posted only five photos on Instagram (@therealemmacoronel), she has more than 563,000 followers.

For her last photo, posted in December, she posed in a white wedding dress, part of a fashion collection. And for a photo posted on her July birthday, she was resplendent in red lipstick, a black leather jacket -- and a crown in her long, dark hair, an echo of the small-town beauty queen she was so long ago.

“Happy birthday to me,” she wrote.