Don't tell Clemson coach Dabo Swinney he has anything to worry about without offensive stars and team leaders in quarterback Trevor Lawrence and tailback Travis Etienne on the Tigers.

“There's nobody that's left our program that we can't go into the locker room and replace,” Swinney said with a smile. “That hasn't been case forever and ever and ever."

Particularly at the two high-profile offensive spots. Clemson seemlessly moved from quarterbacks Tajh Boyd to Deshaun Watson to Lawrence. At tailback, the Tigers during Swinney's time have gone from C.J. Spiller to Andre Ellington, Wayne Gallman and Etienne. 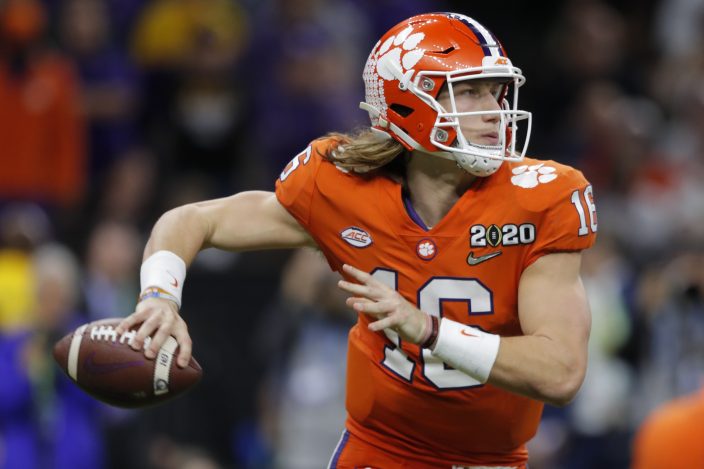 FILE - Clemson quarterback Trevor Lawrence passes against LSU during the second half of a NCAA College Football Playoff national championship game in New Orleans, in this Monday, Jan. 13, 2020, file photo. Ohio State quarterback Justin Fields was among 98 juniors granted eligibility by the NFL into the draft, while national championship-winning QBs Mac Jones from Alabama and Trevor Lawrence from Clemson were among another 30 players eligible after completing their degrees and deciding not to play more in college. (AP PhotoGerald Herbert, File)

It might be bumpier transitioning from Lawrence and Etienne, who've combined to win the past three Atlantic Coast Conference players of the year and are off to the NFL.

Still, the Tigers, who began spring workouts Wednesday, “are always under construction," according to Swinney. 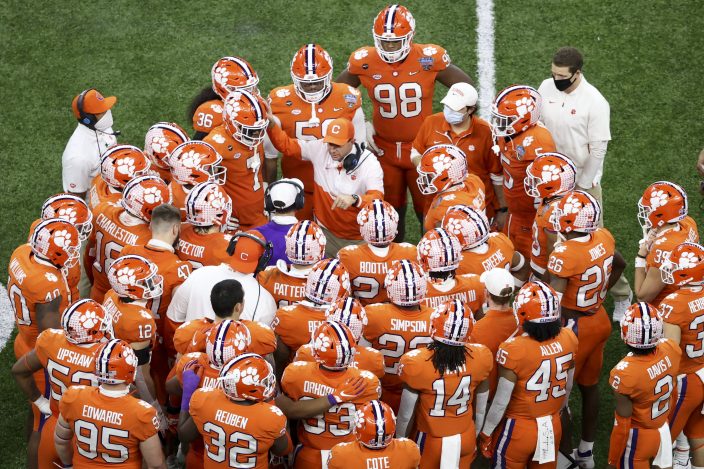 “I got a bunch of guys down in that locker room that we recruited to come in here and be great players,” said Swinney, who enters his 13th full season at Clemson. “That's where we go.”

Waiting there as Lawrence's heir apparent is Uiagalelei, a 6-foot-4, 250-pounder, is as adept at smarts and leadership as he is with his strong arm and powerful legs.

Uiagalelei gave a preview of his ability when Lawrence missed two games with COVID-19 last fall. He rallied Clemson from 18 points down against Boston College for a 34-28 victory. A week later, Uiagalelei threw for 439 yards, the most passing yards ever given up by Notre Dame despite a 47-40 OT loss.

“You got a sneak preview of what this kid can do,” Swinney said.

Dixon has been a steady performer behind Etienne, a 5-10 senior who has averaged 6.6 yards a carry — second to Etienne in program history. But he's never had the weight of a starting tailback.

If Dixon falters, Clemson has several other candidates for featured back including Chez Mellusi, Darien Rencher and Michael Dukes. The Tigers also have a five-star freshman in Will Shipley from Matthews, North Carolina, who turned down offers from Georgia, Notre Dame, Ohio State among others to sign with Clemson.

There are other spots to shore up on offense including receiver where seniors Amari Rodgers and Cornell Powell were team's top two wideouts who combined for 130 catches, 1,902 yards and 14 touchdowns.

But Clemson's Justyn Ross, a likely NFL first-round receiver who missed last year with an injury, will workout in a limited role this spring and Swinney is hopeful he can return to team this season.

Clemson is much more sure on defense where it lost just one starter from last season. Returnees include sixth-year super seniors in linebacker James Skalski and safety Nolan Turner.

“We've got a lot of guys coming back,” Turner said. “But that only matters if you improve.”

Swinney said film of Clemson's last game, a 49-28 loss to Ohio State in the national semis, was clear — “We stunk” on defense.

Turner said the group has taken ownership of the issues and has vowed to improve. “I think we've got a lot of potential,” he said. “We've got to step up and that starts this spring.”

Swinney is hopeful this spring session, which concludes with the team's yearly scrimmage on April 3, can go off with out a hitch: “There's still a virus out there,” Swinney said.

The team got nine workouts in a year ago before the pandemic's start shut things down last March. Swinney believes the discipline and protocols that helped Clemson navigate its 10-2 season will work during the spring.