Ross Colton scored in his NHL debut and Andrei Vasilevskiy made 25 saves in the Tampa Bay Lightning’s 3-0 victory over the Carolina Hurricanes on Wednesday night.

Blake Coleman and Barclay Goodrow also scored, and Alex Killorn had two assists in the third of four straight games between the teams. Vasilevskiy had his 22nd career shutout and first since March 2020 against Montreal.

Alex Nedeljkovic made 25 saves for the Hurricanes after shutting out the Lightning in his previous start. Carolina has lost consecutive games for the first time this season. 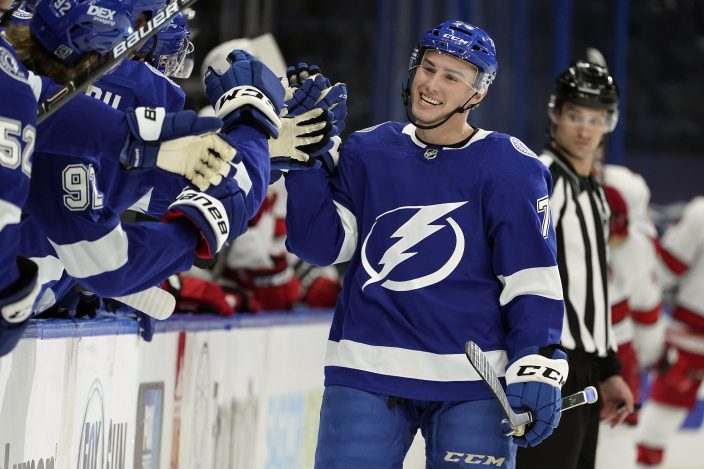 Tampa Bay Lightning forward Ross Colton (79) celebrates with the bench after his goal against the Carolina Hurricanes during the first period of an NHL hockey game Wednesday, Feb. 24, 2021, in Tampa, Fla. (AP PhotoChris O'Meara)

Colton put Tampa Bay opened the scoring on his first career shot on goal during his second career shift, pushing the puck under Nedeljkoviv’s pads at 6:43. Colton is the ninth player in franchise history to score in his NHL debut.

The teams will finish the series Thursday night in Tampa. They split the first two games in Raleigh.

Anton Khudobin made 43 saves for his second shutout of the season, helping Dallas beat Florida to end a six-game winless streak.

Defensemen John Klingberg, Esa Lindell and Joel Kiviranta scored for the Stars in the second of three straight against Florida.

Khudobin has shut out Florida three times in nine career starts. He has 10 career shutouts overall.

The team will finish the series Thursday night. Florida won 3-1 on Monday night in the opener.