Jimmy Butler and the Miami Heat are continuing to claw their way back from a brutal start to the season.

Butler scored 27 points, 14 of them in the final quarter, and the Heat won their fourth consecutive game by topping the Toronto Raptors 116-108 on Wednesday night.

Butler also had 10 assists and eight rebounds for the Heat, plus a season-high three 3-pointers — two of them in the final minutes. Bam Adebayo had 19 points and 12 rebounds for Miami, Duncan Robinson added 17 points and Goran Dragic scored 15 in his return from an ankle injury. 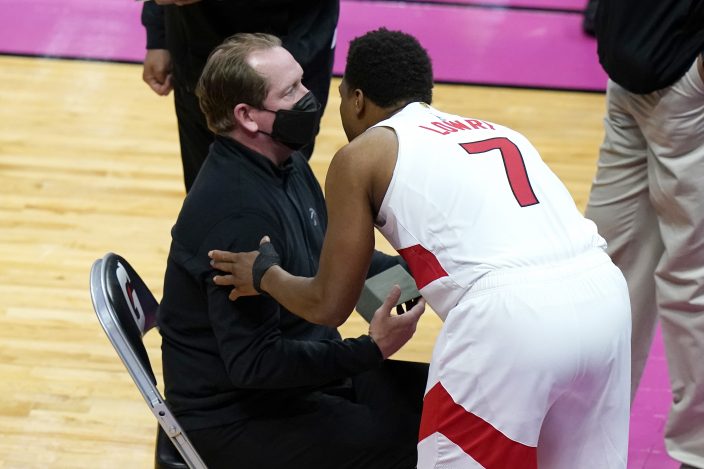 It was the eighth win in the last 11 games for the Heat, who started the season 7-14.

Kyle Lowry, returning from a thumb injury, scored 24 for Toronto. Fred VanVleet also had 24 for the Raptors, Norman Powell scored 17 and OG Anunoby had 14 for Toronto.

Powell made a 3-pointer as the shot clock was expiring to get Toronto within 100-98 before Butler had the game’s next three plays of any significance — a 3-pointer, a steal on the ensuing possession and a layup to push Miami’s lead back to seven.

Another 3-pointer by Butler with 3:23 left restored the seven-point edge, and Miami kept the lead the rest of the way.

Lowry scored 12 of Toronto’s first 20 points in the opening 6 ½ minutes, and he made a 31-footer over Miami’s zone midway through the second quarter to tie it at 48. 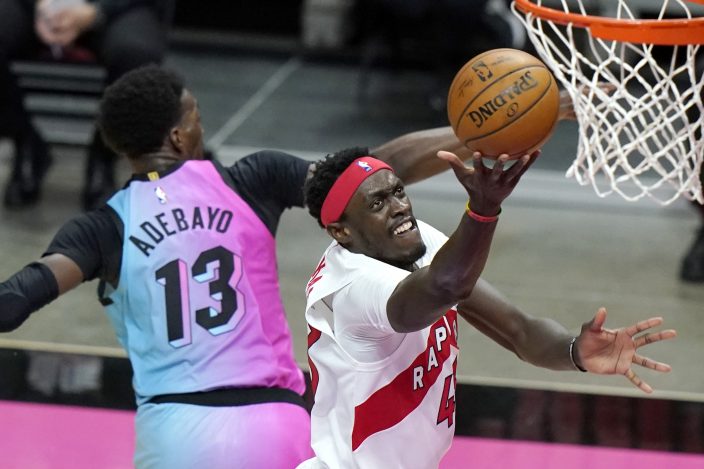 The Heat went on a 17-2 spurt in that time, six players scoring during the run, to open a 15-point lead and wound up taking a 66-56 lead into the locker room for halftime.

Toronto scored the first 10 points of the second half, erasing that entire deficit, but a 17-6 answer by the Heat helped them take a 92-85 lead into the fourth.

Raptors: Pascal Siakam got his fourth foul with 1:18 left in the half, after Miami successfully used its challenge to overturn a blocking call that became a charge. It was the second time in his career that he had four fouls by halftime, the other coming Dec. 18, 2016, at Orlando. ... Toronto fell to 1-5 on the second night of a back-to-back this season.

Heat: Tyler Herro (hip) remained sidelined. ... Capacity was increased for this game, and the Heat had about 3,000 fans in the arena including some in the upper deck for the first time this season. ... Andre Iguodala was 4 for 5 on 3-pointers for Miami. ... It was the 10th time in the last 14 meetings between the clubs that the final margin was less than 10 points.

Heat coach Erik Spoelstra now has 667 wins, including playoffs, with Miami. That ties Red Holzman of the New York Knicks for the fifth-most by any coach with one franchise. The only others with more: Gregg Popovich with San Antonio, Jerry Sloan with Utah, Red Auerbach with Boston and Phil Jackson with the Los Angeles Lakers.