Zion Williamson scored 32 points in his first game since being named a first-time All-Star, and the New Orleans Pelicans beat the Detroit Pistons 128-118 on Wednesday night.

Highlighting his performance with quick dribbling spin moves to elude multiple converging defenders in the paint and set up short floaters and layups, or with thunderous one-handed dunks on cuts down the lane or along the baseline, Williamson made 13 of his 18 shots in reaching the 30-point threshold for the eighth time this season.

Brandon Ingram added 27 points, eight assists and seven rebounds for New Orleans, which trailed most of the first three quarters before edging in front in the fourth quarter, thwarting the Pistons’ bid to win two road games in consecutive nights. 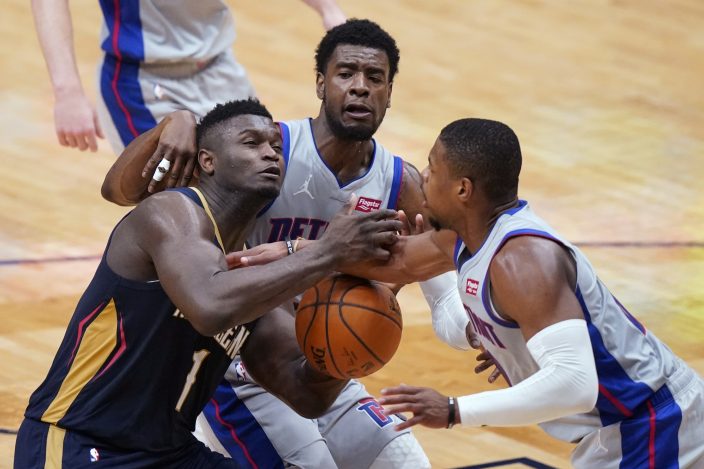 New Orleans Pelicans forward Zion Williamson (1) is fouled as he goes to the basket against Detroit Pistons guards Dennis Smith Jr., middle, and Josh Jackson during the second half of an NBA basketball game in New Orleans, Wednesday, Feb. 24, 2021. (AP PhotoGerald Herbert)

Steven Adams scored 14 points and grabbed 15 rebounds in his first action since missing two games with a sore right ankle. His putback gave the Pelicans a 121-111 lead with 2:15 left.

Danilo Gallinari set an Atlanta franchise record with 10 3-pointers in a 38-point spree that carried the Hawks past Boston.

Gallinari finished 10 of 12 from 3-point range and 13 of 16 overall. He broke the mark of nine 3-pointers by Steve Smith in a 1997 game against Seattle. The Hawks also eclipsed the overall team record by going 23 of 42 beyond beyond the arc.

Green had 12 points, 11 rebounds, nine assists and three steals. The Warriors took control with a late 6-0 run to seal their second straight victory on a four-game trip.

Malcolm Brogdon led the Pacers with 24 points, and Domantas Sabonis had 22 points and 16 rebounds.

Allen, who leads the NBA making 67.2% of his field goals, made 10 of 11 shots from the floor as Cleveland won for the second straight night after dropping its previous 10 contests.

LaVine, named an All-Star reserve Tuesday night, made 14 of 21 shots in his 16th game this season with at least 30 points. Chicago shot 59% from the field.

Minnesota lost for the 10th time in 11 games despite a gutsy second-half rally while playing for the second straight night. New coach Chris Finch is winless in two games since taking over after Ryan Saunders was fired Sunday night. Malik Beasley scored 25 points for the Timberwolves.

San Antonio turned the ball over with 3.9 seconds remaining, giving Oklahoma City the ball with the score tied. Dort’s corner 3-pointer dropped as the buzzer sounded, and his teammates mobbed him.

Dort and Al Horford each scored 16 points for the Thunder.

Dejounte Murray had 27 points for the Spurs.

Jimmy Butler Butler scored 27 points, 14 of them in the final quarter, and Miami beat Toronto for its fourth consecutive victory.

Butler also had 10 assists and eight rebounds. It was the eighth win in the last 11 games for the Heat, who started the season 7-14.