Mats Zuccarello, Zach Parise, Marcus Foligno and Ryan Hartman also scored for the Wild, who finished 4-1 on their road swing. In all, 10 Minnesota players had at least one point.

“Throughout the lineup, everybody is playing really well," Kahkonen said. "Great to see.” 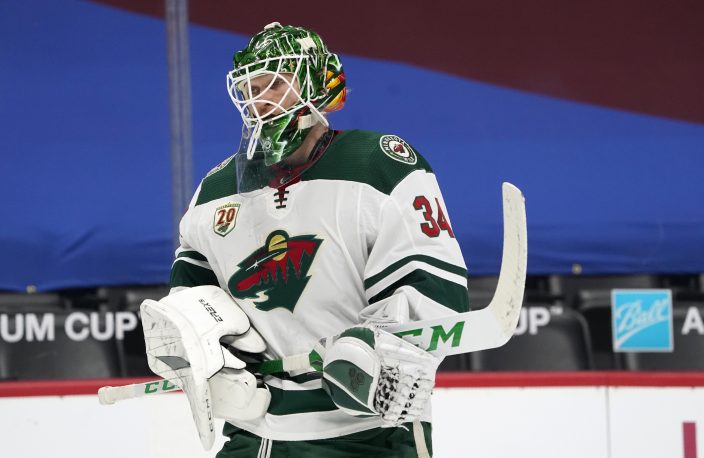 Minnesota Wild goaltender Kaapo Kahkonen skates back to the net after a time out in the first period of an NHL hockey game against the Colorado Avalanche Wednesday, Feb. 24, 2021, in Denver. (AP PhotoDavid Zalubowski)

It was a milestone night for Parise, who earned career point No. 800 with his goal.

“Those numbers, round numbers, are nice to hit,” Parise said. “It means I’ve been playing the game for a while now.”

The game was originally scheduled for Feb. 4, but got postponed due to COVID-19 protocols. 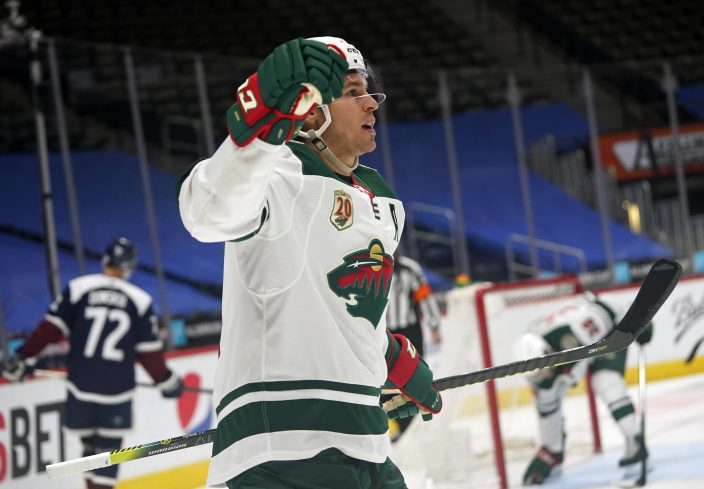 Kahkonen has turned back 103 of 109 shots during the win streak. He's stepped up with Cam Talbot working his way back after being removed from the COVID-19 protocol list.

“It takes everybody,” Kahkonen said. “You can’t rely on one line or one D-pair or one goalie. It takes the full team in the long run to have success. We have a really good thing going. We’ve got to keep going.”

J.T. Compher and Nazem Kadri scored for an Avalanche team that’s dropped two in a row. They were 5-0 following a loss this season. 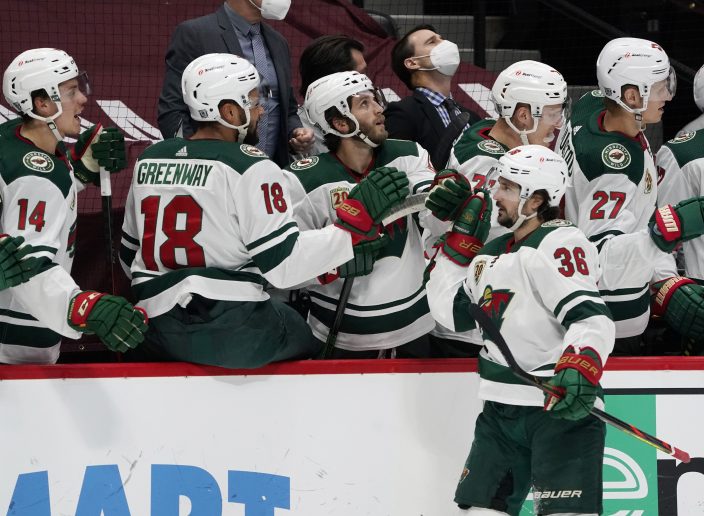 Minnesota Wild right wing Mats Zuccarello, front, is congratulated as he passes the team box after scoring a goal against the Colorado Avalanche in the first period of an NHL hockey game Wednesday, Feb. 24, 2021, in Denver. (AP PhotoDavid Zalubowski)

“A bit of adversity, I think, is good for us as a group and it’s going to be good for us long term,” Avalanche captain Gabriel Landeskog said. “Good teams find a way to turn things around pretty quickly and I have no doubt we’ll do that.”

This was a rough outing for Philipp Grubauer, who made 19 saves. 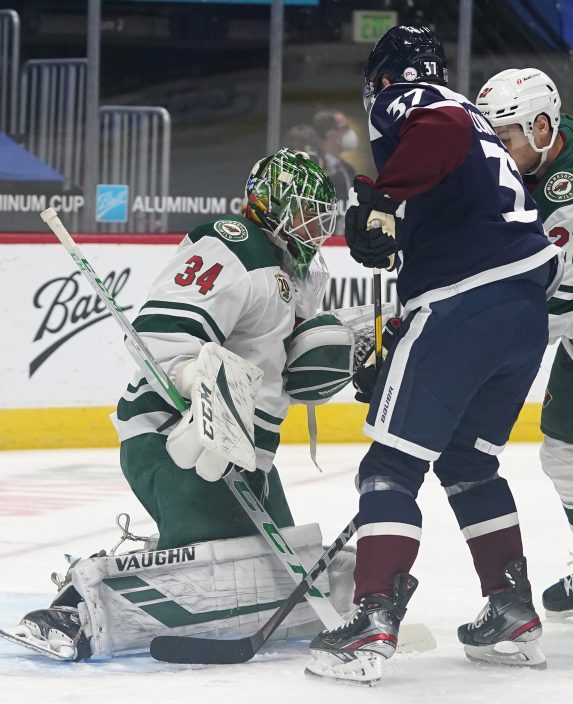 Kadri's power-play goal with 17 minutes remaining pulled the Avalanche to 3-2. It ended an 0-for-19 drought with the man advantage spanning the last seven games. Colorado's special teams also allowed a short-handed goal by Foligno in the second period.

Minnesota put the game away with goals by Hartman and Sturm 1:03 apart in the third. Sturm added another in the final period.

Those were Sturm's first two goals of the season. 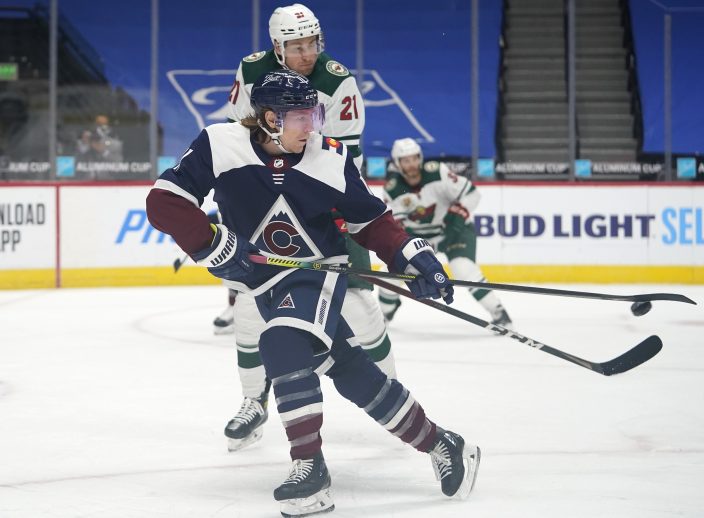 “If you had a camera on the bench when he scored his goal, it’s as excited as our group has been all year,” Wild coach Dean Evason said. “It’s nice for a guy like that to get rewarded, for sure.”

Zuccarello scored for a third straight game. He also had an assist to give him nine points since his season debut on Feb. 16. Zuccarello missed the first 11 games with an upper-body injury. 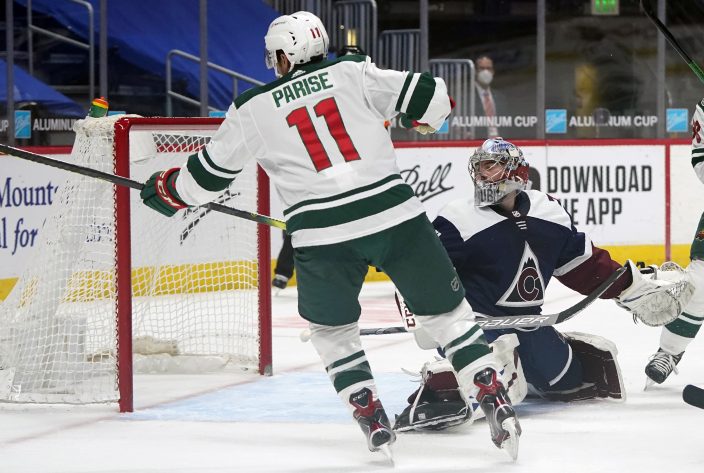 Colorado forward Brandon Saad missed the game to be with his wife as they expect their second child.

“They went into the hospital last night, so we are hoping and praying that everything is going good there,” Bednar said.

A packed upcoming schedule may mean the Avalanche utilize their taxi squad. They don't have more than one day between games for the rest of the season. Included in that are six back-to-back contests.

“We’ll just keep playing it by ear,” Bednar said of using a wave of fresh players. “We need to start building chemistry on some lines and throughout our lineup in order to get the production that we want."

Evason has been impressed with veteran defenseman Ian Cole, who was acquired from Colorado on Jan. 19.

“What he’s brought to our room is leadership," Evason said.

Wild C Marcus Johansson missed a third straight game with an upper-body injury. ... F Kirill Kaprizov had two assists. ... F Mikko Rantanen and D Cale Makar had assists for Colorado. Makar reached 50 career assists in 71 games — the fifth-fastest among defensemen in NHL history, according to the team. ... Both of Compher’s goals this season have come against Minnesota.