Whitney Munro had some concerns about returning to sporting events. So, like any good mom, she did her homework, learning more about the policies in place because of the COVID-19 pandemic.

Munro, 38, who lives in Coppell, Texas, with her husband, Rupert, and 13-year-old son, Riley, went to the Dallas Stars' watch parties during their run to the Stanley Cup Final last year. She watched her Oklahoma Sooners' Cotton Bowl win on Dec. 30, and she has season tickets for the Stars this year.

“I’ve actually felt really safe,” said Munro, who works in nonprofit management. “And I felt like the organizations who hosted the events that we’ve gone to have done a great job of putting in kind of just those type of parameters so that everyone feels comfortable and gets to actually go do this stuff.” 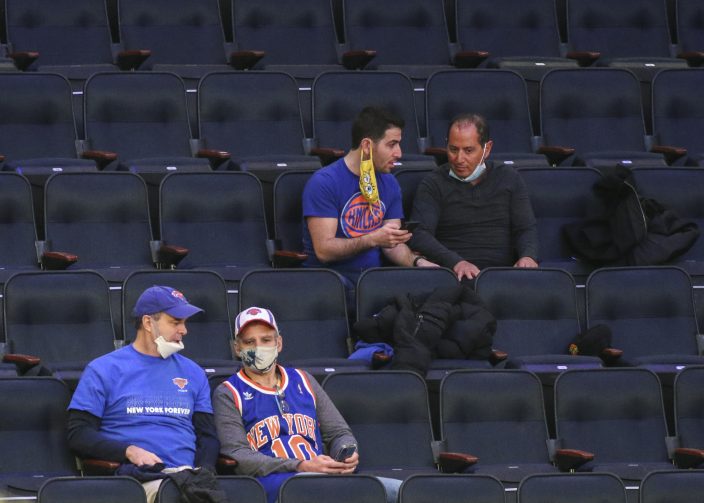 Fans wait for an NBA basketball game between the New York Knicks and the Golden State Warriors at Madison Square Garden on Tuesday, Feb. 23, 2021, in New York. (Wendell CruzPool Photo via AP)

Another wave of fans is set to follow Munro into arenas and ballparks across the United States as more sports begin to host small crowds amid the pandemic. New York's Madison Square Garden had roughly 2,000 fans on hand for the Knicks game Tuesday night. Several spring training facilities will open their doors to fans when major league exhibition games start on Sunday. The NCAA men's basketball tournament in Indiana has cleared the way for small crowds after it was canceled last year.

Socially distant seating, mask mandates and temperature checks will be in place at many venues, but some experts remain concerned about community spread and the threat of more contagious variants of COVID-19. While average daily deaths and cases have plummeted in recent weeks, the COVID-19 death toll in the U.S. topped 500,000 Monday.

Many places will have no problem filling their limited capacities, but some sports are looking at a longer road when it comes to fans returning. The scoreboard displays a message welcoming fans to an NBA basketball game between the Golden State Warriors and the New York Knicks on Tuesday, Feb. 23, 2021, in New York. (Wendell CruzPool Photo via AP)

Of the 109 million devices belonging to NASCAR fans — based on online browsing behavior like interacting with a NASCAR website or purchasing NASCAR apparel — 68 million, or 62%, were considered re-emerged, the best percentage of any of the sports examined by 4FRONT. UFC was next at 59% of 40 million devices, followed by the NFL at 53% of 497 million devices. Major League Baseball (42% of 245 million) and the PGA Tour (20% of 94 million) were at the bottom of the list.

“I think broad headline, fans are ready to come back,” said Dan Migala, a co-founder and partner at 4FRONT. “Just the overall data, they're basically saying we're ready. The fact that the majority of those are in that 40-to-60% range is a great sign.” 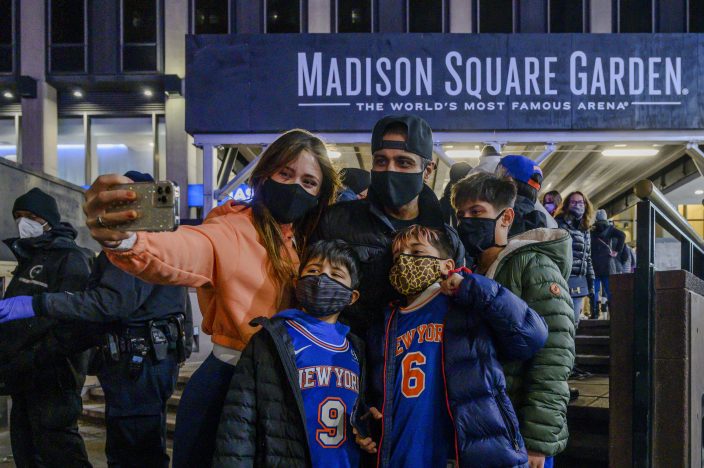 The Quershif family take a selfie outside Madison Square Garden before an NBA basketball game between the New York Knicks and the Golden State Warriors in New York on Tuesday, Feb. 23, 2021. A limited number of fans was allowed to attend. (AP PhotoBrittainy Newman)

Even small crowds during a pandemic present a wide array of challenges for sports organizations, beginning with the safety of fans and employees. Collaboration is one route for helping alleviate some of the issues.

NFL teams shared best practices throughout the season, and Kansas City Chiefs president Mark Donovan said the organization had been in communication with MLB's Royals. Kauffman Stadium is across a parking lot from the Chiefs' Arrowhead Stadium.

The Chiefs hosted approximately 17,000 fans for each home game last season. Fans had to go through temperature checks, sit in small groups and pods, adhere to strict social-distancing measures and wear facemasks whenever they weren’t eating or drinking. “It’s really brought our organization closer together,” Donovan said. "We all do a good job of dividing and conquering and staying in our lanes and football and business, but when you’re on the phone at 3:30 a.m. doing contact tracing to see whether a player can play or a worker can work almost every day, every week, it does bring you together.”

Eric Ownby, 50, a construction executive in Scottsdale, Arizona, attended the PGA Tour's Waste Management Phoenix Open this month. It was his first professional sports event since the pandemic started.

Ownby was impressed with how organizers handled the limited fans in attendance. 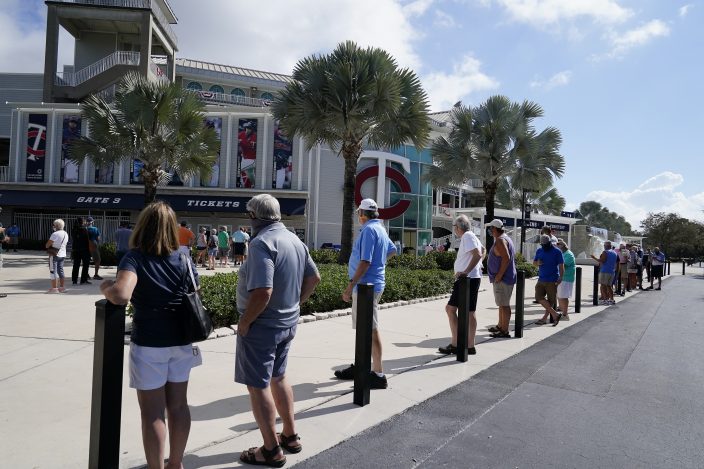 “I thought they did a great job of being very professional, very polite, but making sure that the spectators adhered to the mask requirement,” he said.

Shelley Caine, 58, a retired school counselor in Milwaukee, had a similar experience when she attended Green Bay's playoff game against Tampa Bay a month ago. She said she tends to be more cautious when it comes to COVID-19, but she felt comfortable at Lambeau Field because of the Packers organization's attention to detail.

“Even like in the women's restrooms, I mean there's just hardly any people there, but there was somebody in there cleaning constantly,” she said. “They covered sinks so that you could only go to every other sink. Yeah, I thought they really did a good job.” Florida Panthers fans watch in a socially distanced arena during the third period of an NHL hockey game against the Dallas Stars, Monday, Feb. 22, 2021, in Sunrise, Fla. The Panthers won 3-1. (AP PhotoLynne Sladky) Fans watch the New York Knicks play against the Golden State Warriors in an NBA basketball game Tuesday, Feb. 23, 2021, in New York. For the first time this season, fans were allowed to attend a Knicks home game. (Wendell CruzPool Photo via AP) 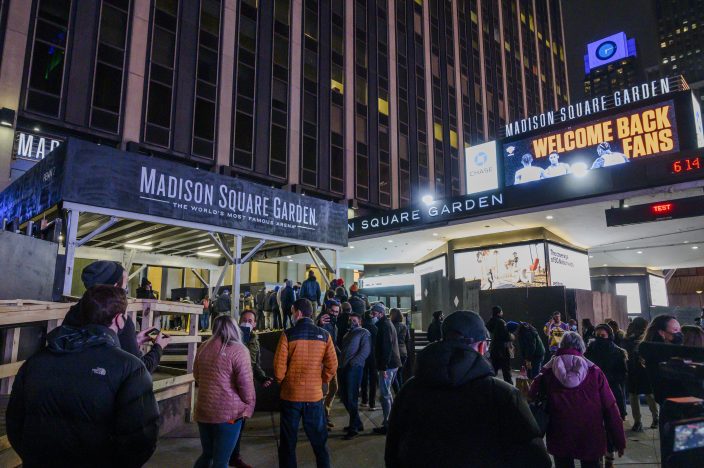 Fans line up outside Madison Square Garden for an NBA basketball game between the New York Knicks and the Golden State Warriors in New York on Tuesday, Feb. 23, 2021. (AP PhotoBrittainy Newman) Fans arrive for an NBA basketball game between the Golden State Warriors and the New York Knicks on Tuesday, Feb. 23, 2021, in New York. A limited number of fans were allowed to attend. (Wendell CruzPool Photo via AP) 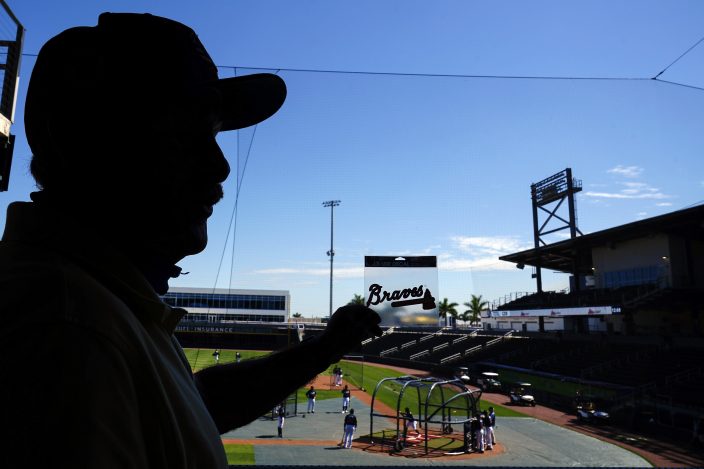 A fan shows a decal for his car as the Atlanta Braves take batting practice during spring training baseball practice on Tuesday, Feb. 23, 2021, in North Port, Fla. (AP PhotoBrynn Anderson) 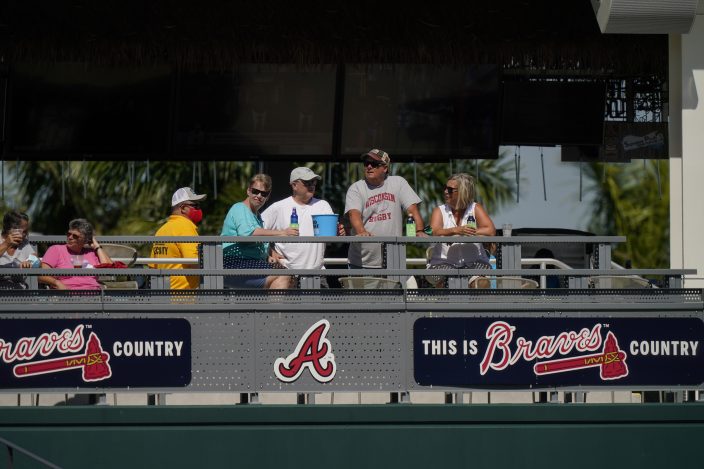