Looking at individual stats reveals nothing about the Utah Jazz.

And they have the NBA’s best record — by a considerable margin. 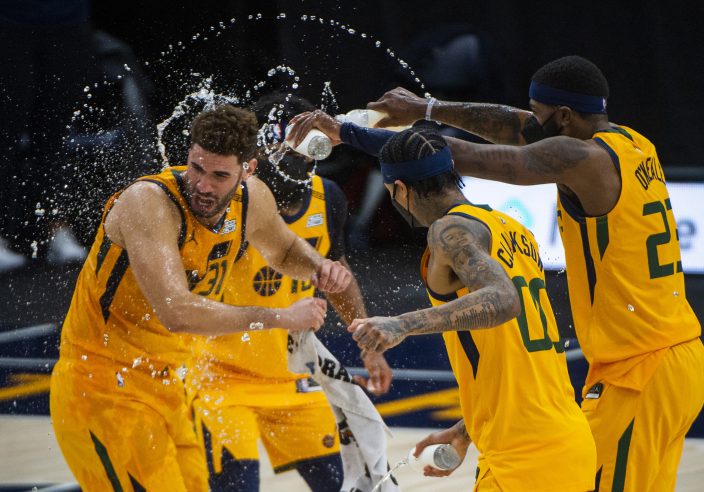 Take note: The Jazz are off to the best start in franchise history, are on pace to shatter the NBA record for 3-pointers made per game, have won 20 of their last 22 games and just handed the reigning champion Los Angeles Lakers their worst loss of the season.

“They’re the hottest team in the league,” Lakers coach Frank Vogel said after his team, which was without Anthony Davis and Dennis Schroder, lost 114-89 in Salt Lake City on Wednesday night. “Nobody’s playing as well as the Utah Jazz in the NBA right now.”

At 26-6, the Jazz sit atop the NBA. That alone is impressive.

The rest of the team numbers only adds to the story.

They have led by double figures at some point in 26 of their 32 games, led by at least 20 points in 19 of them and led wire-to-wire six times. They are third in the NBA in points per game scored — despite playing at the league’s 22nd-slowest pace — and are second in points per game allowed.

And what they’re doing from beyond the arc is historic. Utah is averaging 17 3-pointers per game, well ahead of the NBA record of 16.1 per game set by the 2018-19 Houston Rockets. The Jazz have made 544 3s, the most in NBA history by any team in its first 32 games.

“At the end of the day, everybody’s coming for us,” guard Donovan Mitchell said.

When counting all players, not only those who have made enough appearances to qualify for the league leaders in various categories, the Jazz don’t anyone ranked in the top 20 in points per game and only one in the top 50; Mitchell is 21st. Rudy Gobert, ranked third, is the only Utah rebounder in the top 50.

Mike Conley leads the Jazz in assists per game; he entered Thursday ranked 32nd in the league in that stat. Conley is averaging 16.3 points and 5.7 assists. Those are good numbers, hardly eye-popping ones, but this is where just looking at the stats the Jazz are putting up can be dangerous.

Utah openly clamored for Conley to make his first All-Star team this year and join Mitchell and Gobert on the squad; not enough voters agreed, quite possibly overlooking him because averages like his are fairly common — going into Thursday’s games, 24 players had those averages in both categories.

What voters might not have realized is this: Conley is averaging that in only 29 minutes per game. The Jazz often are playing reserves by the midpoint of the fourth quarter, a perk that comes when games have turned into blowouts.

“A lot of these games we’ve played we’ve won by double digits, so you’re not normally playing late in the fourth quarter and stuff like that,” Conley said. “Our team is that good right now.”

Tests are coming, though.

The Jazz end the season’s first half with a four-game road trip that starts Friday in Miami. Once the All-Star break ends, Utah plays five of its first six second-half games on the road as well.

But with the way they're playing now, even Vogel concedes that the Jazz are doing a whole lot right.

“They way they’re shooting the ball, they way they’re connected defensively, the continuity bump that they’re getting by having the same team come back,” Vogel said. “All those things are playing out well. Coach Quin Snyder is doing a phenomenal job with them. They’re playing like the best team in the league right now.”