The Californian's first opportunity to do so, in a unique player-controlled league set to debut in Dallas, also comes at an interesting time in her Olympic career.

Lowe is playing her first competitive matches in a year amid continuing uncertainty over whether the Tokyo Games will happen this summer after they were postponed because of the pandemic. 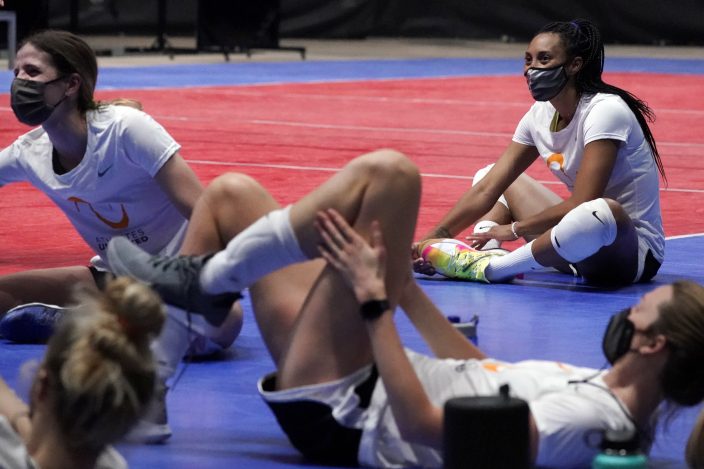 “Every practice, I'm thinking about how I'm going to return to form for the national team,” the 28-year-old Lowe said. “I think the coaches, especially at the national team, are looking for me in particular, they’re looking at this league, with high levels of scrutiny because they haven’t seen me play in a year — a year and a half with national team activities.”

Athletes Unlimited is launching its second sport — softball was the first in suburban Chicago last August — in a model that tracks success for players rather than teams. The leaders in the standings are the captains in charge of drafting players each week during a five-week run starting this weekend. The 44 players will be split among four teams for each set of games.

“It’s really, really different,” Lowe said. “And I think it’s really exciting. I’ve been playing the sport for, I don’t know, 15 years, but it’s the first time that I’ve been really kind of caught off guard of, ‘Wow, this is something really new.’” 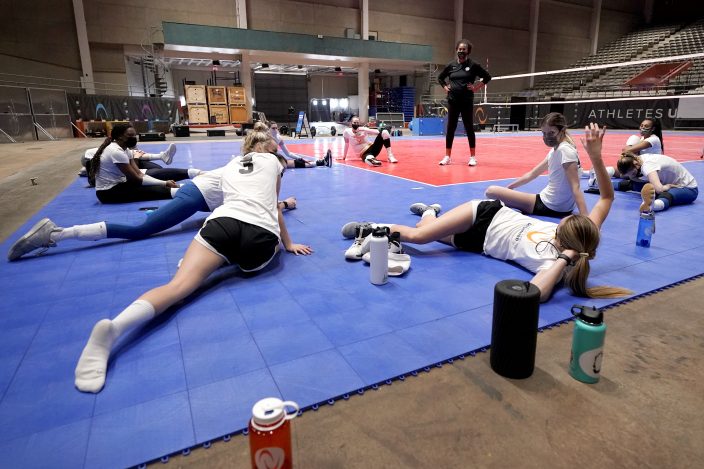 The softball event didn't have fans, nor will the volleyball version near downtown Dallas, both because of the pandemic. Athletes Unlimited co-founder and CEO Jon Patricof said the model never emphasized attendance, although the league wants to have fans when the time comes. The first lacrosse league is planned for July.

“I like to cite that 98% of the fans of Premier League teams or the LA Lakers have never been to a game in person,” Patricof said. “So why would you build a business model based around the 2% that attend games and not focus on the 98% that have actually never been there?”

TV and streaming coverage is the primary focus for Athletes Unlimited, with the league adding distribution to more than 100 countries for the volleyball event through deals with ESPN International, CBC Sports of Canada, Great Britain's FreeSports and Europe-based Setanta Sports. 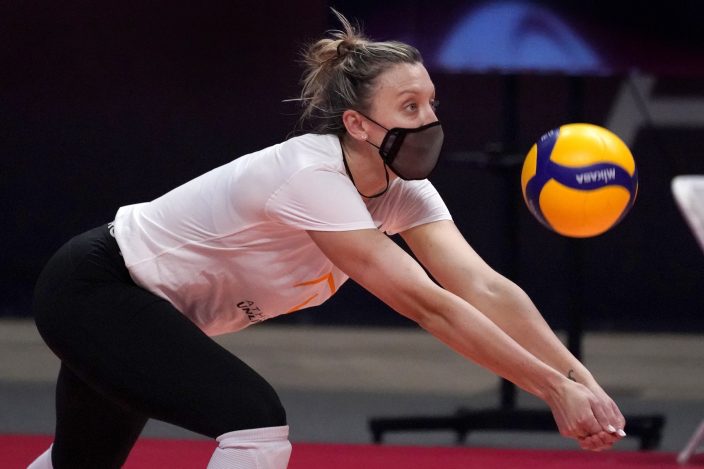 Some of the 30 games will be carried on the CBS Sports Network and Fox Sports channels along with Facebook, YouTube and the popular gaming stream Twitch.

Lowe was playing professionally in Italy last March when her league shut down because of COVID-19 and the former UCLA player had to scramble to get back to the United States. She said some of her Olympic teammates are playing in Europe now, and she knows it will be difficult for a domestic league to compete for talent with the many established pro leagues overseas.

“Speaking to many of my team members of Team USA, I know that it would be a huge draw to be able to stay in our home country,” Lowe said. “And a lot of national teams have that luxury.” 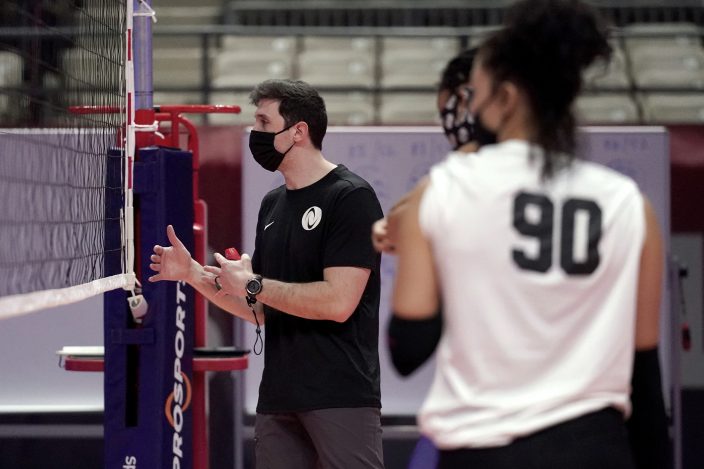 The Athletes Unlimited players have a say in uniforms and TV deals while being guaranteed $10,000 with the possibility of bonuses. In the longer term, they could share in league profits.

“We think that increasingly fans are focused on individual athletes,” Patricof said. “Karsta's had fans who followed her through her college career and have followed her overseas. We want to help her build her following and let fans connect more with her on the court and off the court.”

To that end, the league has an agreement with Topps for what it says is the first set of trading cards for women's pro volleyball. The other Olympians in the inaugural event are part of the Topps agreement: American Jordan Larson, two-time Olympic champion Sheilla Castro of Brazil, Bethania De La Cruz of the Dominican Republic, Great Britain’s Ciara Michel, Aury Cruz of Puerto Rico and Turkey’s Ozge Kirdar. 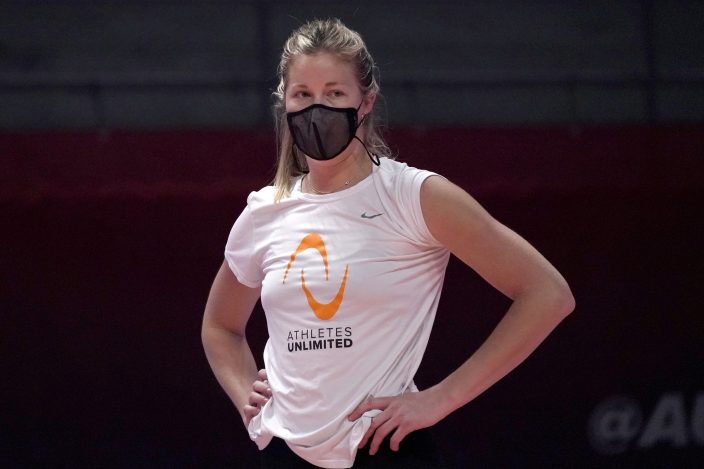 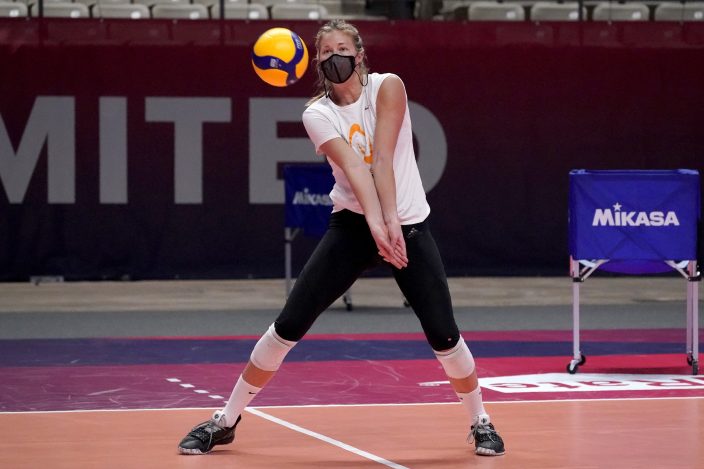 Karsta Lowe reaches out to make a pass during volleyball practice in Dallas, Wednesday, Feb. 24, 2021. U.S. Olympian Lowe is playing competitive volleyball again for the first time since the pandemic had her scrambling to get home from a pro league in Italy a year ago. (AP PhotoTony Gutierrez) Right side hitter Karsta Lowe, second from right, delivers a hit during volleyball practice in Dallas, Wednesday, Feb. 24, 2021. U.S. Olympian Lowe is playing competitive volleyball again for the first time since the pandemic had her scrambling to get home from a pro league in Italy a year ago. Lowe is part of a unique, player-run American venture first tried with softball near Chicago last summer. A five-week season that emphasizes individuals over teams starts this weekend. (AP PhotoTony Gutierrez)