It's already been a busy offseason for Indianapolis Colts coach Frank Reich.

Free agency and the draft are still to come. 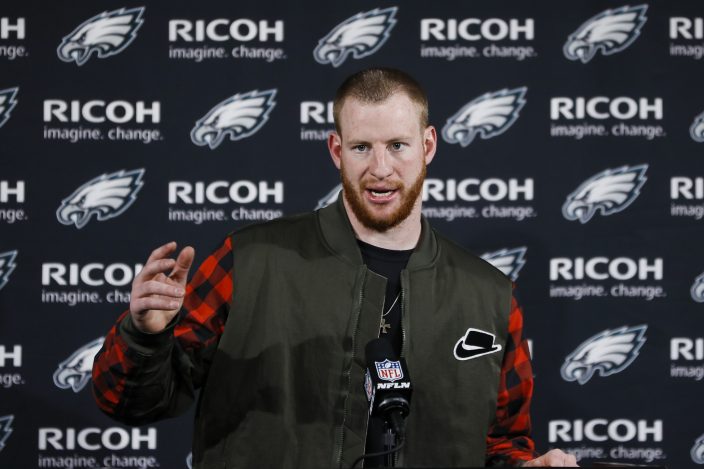 FILE - Philadelphia Eagles quarterback Carson Wentz speaks with members of the media after an NFL football game against the Dallas Cowboys in Philadelphia, in this Sunday, Dec. 22, 2019, file photo. The Philadelphia Eagles have agreed to trade Carson Wentz to the Indianapolis Colts, according to a person familiar with the deal. The person spoke to The Associated Press on condition of anonymity because the deal hasn't been announced. (AP PhotoMichael Perez, File)

Yet amid all these moves, Reich is even more determined to solidify the component Indianapolis needs most: continuity.

“I think you always feel like you're going to play whatever cards you’re dealt and we’ll play them well," he said Thursday on a video call. “But obviously the moves we make in free agency are designed to have a longer-term answer so you can grow as an offense. That’s always the plan." 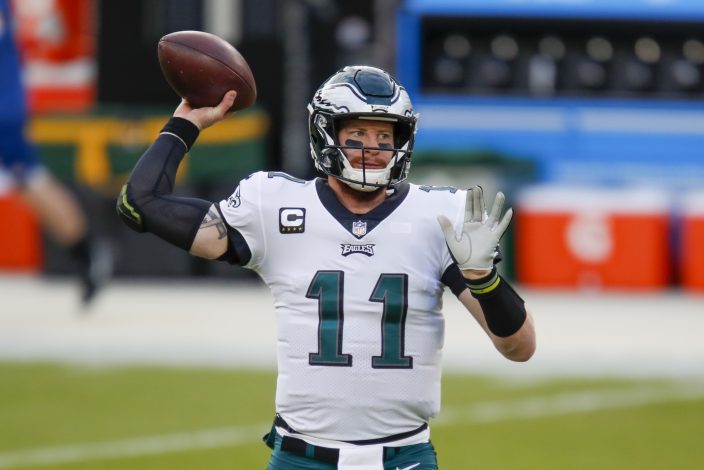 FILE - Philadelphia Eagles' Carson Wentz warms up before an NFL football game against the Green Bay Packers in Green Bay, Wis., in this Sunday, Dec. 6, 2020, file photo. The Matthew Stafford-Jared Goff trade not only has whet fans' appetites for big deals, it's caused a social media frenzy about which quarterbacks are headed elsewhere. (AP PhotoMatt Ludtke, File)

The Colts opened each fall with a different starting quarterback: Andrew Luck, Jacoby Brissett and Rivers. That streak will almost certainly continue after the Colts traded two draft picks to Philadelphia for Wentz. League rules prohibit team officials from talking about the trade or Wentz until the new league year begins March 17.

And while Indy has reached the postseason twice during Reich's tenure, it hasn't advanced beyond the divisional round.

The Colts believe if Wentz performs the way he did in 2016 and 2017, while working with Reich, they could have the missing puzzle piece to their championship aspirations. Plus, with the 28-year-old on a four-year contract, it could give the Colts some badly needed stability following the retirements of Luck in August 2019 and Rivers last month, as well as the expected departure of Brissett in free agency,

Now Reich will get a chance to do it all over again.

“One of the ways you build confidence back is you go back to the basics, the fundamentals, the fundamental schemes, and you build it one day at a time," he said. “That goes for any of us and that’s the way we’ll do it at every position, not just the quarterback position."

Wentz will be working with a largely different cast than Rivers had after Sirianni poached several Colts assistants for his new staff in Philadelphia.

Brady and Milanovich worked together in the CFL and Reich hopes that will lead to more creativity on the field.

“They’re both really intelligent guys with very innovative ideas that will keep us moving in the right direction.“ Reich said. “We interviewed a lot of candidates, but these (six new) guys really stood out."

One thing that could help Wentz rebound is an offensive line that's been among the league's best for three years.

Losing Castonzo will hurt. But Reich acknowledged three-time All-Pro left guard Quenton Nelson would be willing to move to tackle if that's how the Colts choose to go. The other key offensive questions heading into free agency are whether the Colts will re-sign four-time Pro Bowl receiver T.Y. Hilton, age 32, or former 1,000-yard rusher Marlon Mack, who missed all but two quarters last season with a torn Achilles tendon.

With or without them, the Colts are counting on Wentz to provide a solid long-term solution.

“We believe we have the right roster here, we believe we have the right culture here and getting good quarterback play is critical to winning a world championship,” Reich said. “I feel like we’ve gotten good quarterback play our three years here and I think we need to continue to get that kind of play and even improve on that to win a world championship."