Right-hander Kevin Gausman’s impressive day at spring training had nothing to do with any of the usual statistics, like strikeouts or innings pitched. 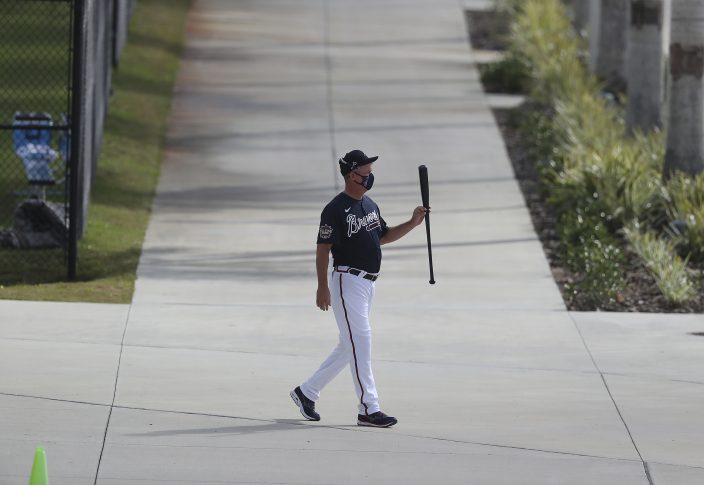 “We played a little game of Fungo golf with the pitchers just to get them swinging the bats a little bit, just kind of ramping up very, very slowly the intensity and the feeling of having a bat in their hands and finding the sweet spot,” manager Gabe Kapler said of the lighter training bats called Fungos, which players hit toward targets the same way coaches hit infield practice.

“So that was a lot of fun. We hit balls and chased them around the diamond. It’s just a unique and fun way to practice something.”

There was no need to hush the crowd, since no fans were surrounding the Giants’ diamond course. But the stands won't be empty — or full — when the Giants host their spring training opener Sunday. 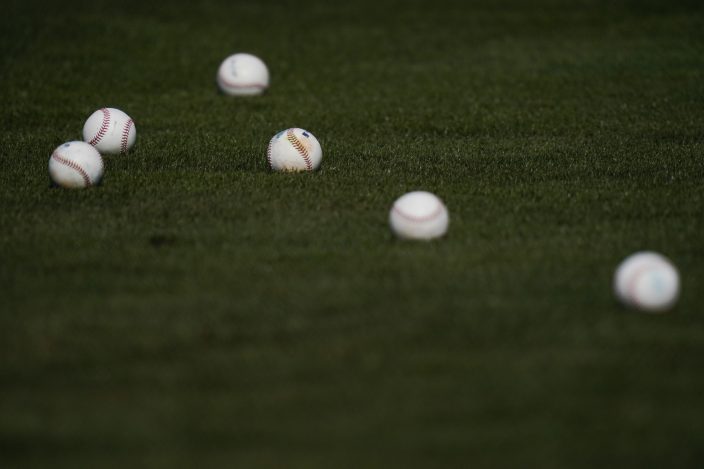 Fans will be able to attend all games in Arizona and Florida that are played in the 23 spring training ballparks — seven of those stadiums host two teams. While there are wide variations depending on local ordinances, the average limited capacity will be about 20% — or about 2,000 fans. There will be mask requirements, and tickets will be sold in pods to facilitate social distancing between unrelated groups.

Scottsdale Stadium will have the lowest capacity at 9%, which is about 1,000 fans for Giants home games. The largest allowed capacity is 28% for the New York Yankees in Tampa Bay (about 2,642 fans), and the Minnesota Twins in Fort Myers, Florida (about 2,435 fans).

"I think that’s actually going to be a very under-the-radar but very important thing for our guys,” Twins manager Rocco Baldelli. “I’ve been very open about comments that I’ve heard from all of our players throughout our clubhouse about just how much better it is to play baseball in front of a stadium, in front of a group of fans, in front of people pulling for you. 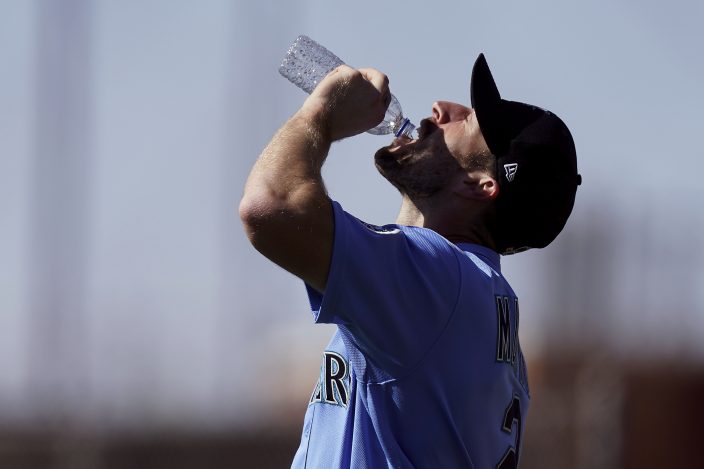 “I talk about the energy level, I talk about guys’ ability to focus and just like pure enjoyment, that level goes way up when you get thousands of people enjoying themselves and are there supporting you. So our guys are ready.”

Sloan Park in Mesa, Arizona, the spring training home of the Chicago Cubs, will have a 22% capacity. That translates to about 3,630 seats, by far the largest possible crowd, with the Yankees the next-closest.

Spectators at Scottsdale Stadium may get to see Gausman throw his lively fastball, but not a look at his Fungo golf skills. Kapler said the 30-year-old righty exhibited "really nice touch and loft when necessary. It was a good showing for him.” 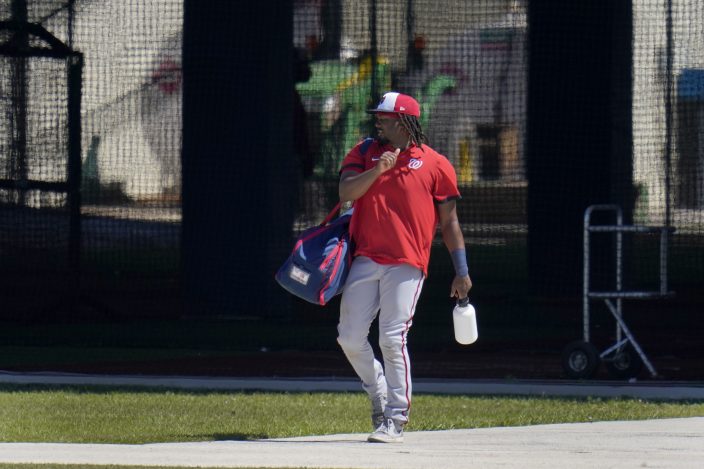 Kapler has worked to “create some variety” given spring training can quickly become “mundane.”

The Giants have warmed up with footballs and incorporated tennis balls, too.

“When sports are fun they also tend to lead to really good practice,” Kapler said. “Variety adds a lot of spice to our workouts.” 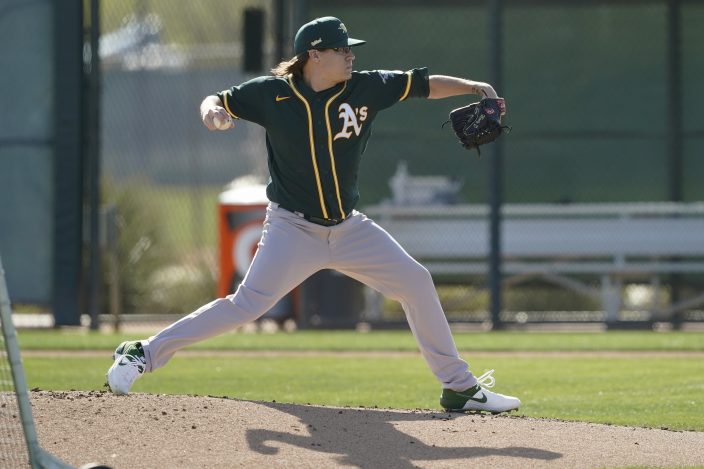 Yelich is attempting to bounce back from a season in which he hit just .205 after winning consecutive batting titles in 2018 and 2019. 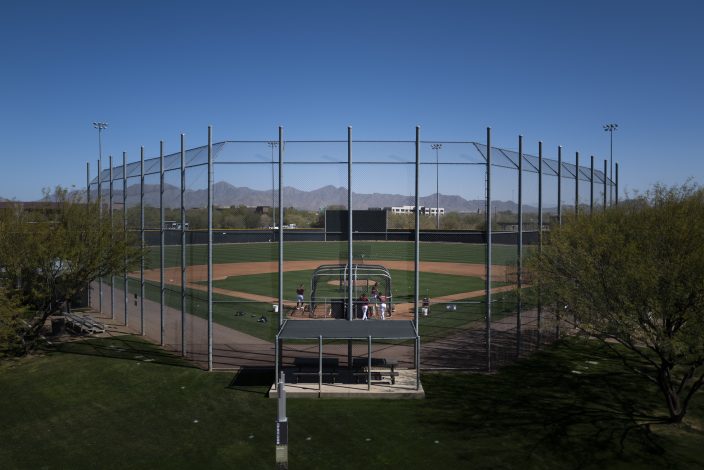 “We’ll definitely get started earlier with Christian this spring and then take it from there,” Counsell said. “The goal would be to get him going early, kind of get him feeling good and ease off toward the middle of spring then kind of ramp him back up later in the spring.”

Hall of Famer Chipper Jones has been active in his new role as an Atlanta Braves hitting consultant at the team’s spring training site in North Port, Florida.

Manager Brian Snitker said Jones, who played his full 19-year career with the Braves, is a valuable resource for players. Jones was part of 11 consecutive NL East titles from 1995-05, and their World Series championship in the first year of that run.

“He’s a hitting savant,” Snitker said. “He’s got such great feel. He’s got a good eye, watching these guys, too. He sees things. It’s going to be awesome having him here.”

Oakland right-hander Frankie Montas joined the Athletics in Mesa, Arizona, after his spring was delayed by a positive coronavirus test before camp began.

Montas, the team’s opening day starter last season, had been quarantining at home in Scottsdale. Manager Bob Melvin had said when A’s pitchers reported to camp last week that Montas was already “several days” into his quarantine.

HAVING ’EM AT THE BALL GAME

Indians manager Terry Francona was excited to hear fans will be allowed at home games in April at Progressive Field. Per state guidelines, the team is being permitted to have 30% capacity in their 35,000-seat ballpark.

Francona said it was challenging last season without fans.

“When the lower bowl is crowded — and I know that may not happen this year — but when there’s people in that lower bowl, it sounds good. I mean, it feels good,” he said. “Going from zero to anything was going to be fun, especially for the players. Thirty percent, you know what, man, I think that’s pretty awesome.

“I hope they’re able to pull it off safely and people warm up to the idea because we’ll really be thrilled if that’s the case."