Pavel Zacha converted Jesper Bratt’s drop pass to score 1:17 into overtime and the New Jersey Devils rallied from a pair of one-goal deficits to beat the Buffalo Sabres 4-3 on Thursday night.

The Devils snapped a three-game skid by beating an injury-depleted Sabres opponent.

Buffalo opened minus captain Jack Eichel, who was scratched after testing a lower-body injury during the pregame skate. And the Sabres then lost starting goalie Linus Ullmark, who was sidelined after stopping all 15 shots he faced in the first period. 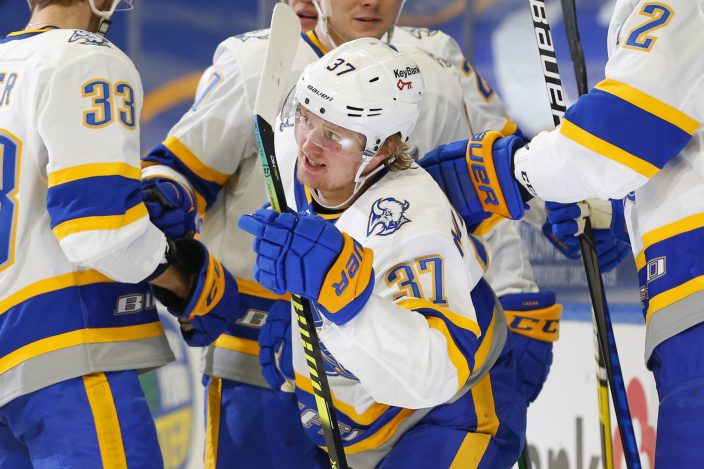 Bratt, Miles Wood and Nico Hischier also scored for the Devils, and Mackenzie Blackwood stopped 29 shots. Zacha had two assists to extend his points streak to eight games in which he has three goals and seven assists.

Casey Mittlestadt and Riley Sheahan also scored for the Sabres, who dropped to 2-5-1 in their past eight, with both wins coming against New Jersey. Carter Hutton stopped 25 shots in relief of Ullmark. 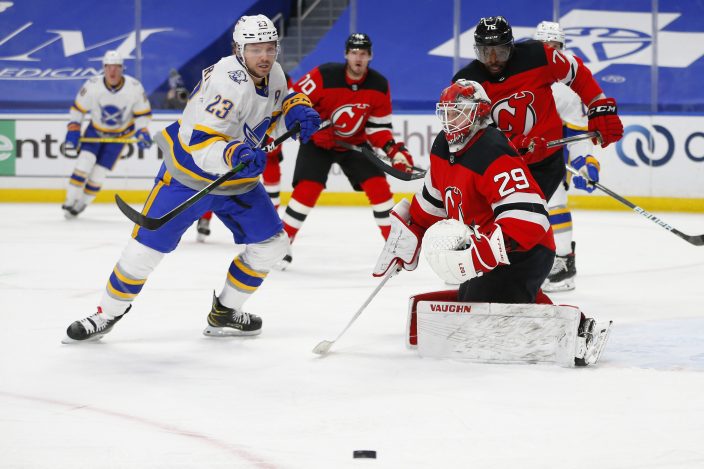 The decisive goal came with Bratt gaining the Sabres zone and dropping a pass back to Zacha, who was trailing. Zacha then leaned into a snapshot from the right circle to beat Hutton inside the far post.

The game’s complexion turned 2:58 into the third when Hall was penalized for high-sticking Wood while battling for the puck in the Devils corner.

Wood tied it 1:27 later by sweeping in a loose puck at the right post, and after Nikta Gusev’s pass through the middle was blocked. 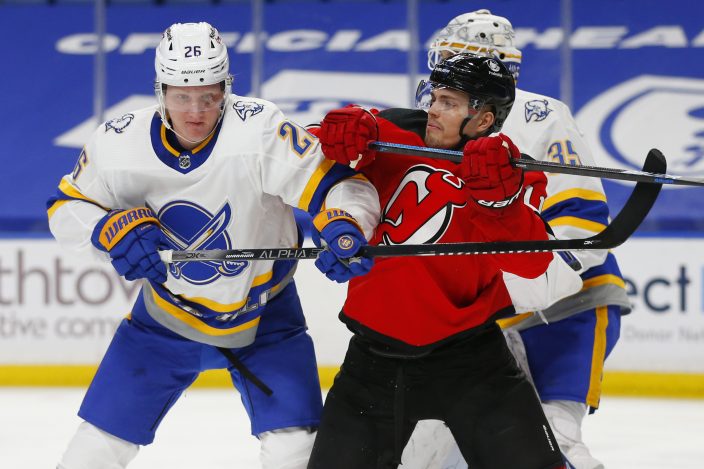 Hischier scored the go-ahead goal 20 seconds after Hall’s second penalty expired courtesy of another fortunate bounce. Zacha’s centering pass deflected off the skate of Sabres defenseman Brandon Montour and directly to Hischier at the right post, where he swept the puck in under a pile of bodies.

Mittelstadt put the Sabres up 2-1 with a power-play goal in which he redirected Eric Staal’s centering pass from the right boards 8:03 into the second period.

For Mittelstad, who spent much of last season in the minors, it was his first goal since Nov. 29, 2019. Staal, meantime, earned his 1,029th career point to move one ahead of former New York Rangers defenseman Brian Leetch into 81st on the NHL list.

The Sabres continue to cash in on their power play in converting two of four chances. Buffalo has gone 16 of 38 in its past 11 games and scored at least once in 13 of 17 outings.

Don’t tell Krueger high-priced forward Jeff Skinner is in the doghouse after being scratched for third consecutive game.

“Number one, I don’t have a doghouse, I don’t know really what that is,” Krueger said following a pre-game skate in which Skinner worked with the team’s taxi squad.

Krueger then declined to go into detail the reason behind his decision regarding Skinner, who hasn’t score in 18 consecutive games dating to last season, and in the second year of an eight-year, $72 million contract.

“I’d love to share everything at all times with everybody ... but there are certain things that evolve in the development of a team or an organization or a group behind the scenes,” Krueger said. “Every decision is made for the whole, for the group.”

Krueger later said, “No” when asked if Skinner was being benched for disciplinary reasons.

The Devils and Sabres are in the same situation in playing a very condensed schedule after both teams had their seasons paused for two weeks earlier this month. Buffalo is playing its final 46 games over an 83-day stretch, while the Devils are squeezing in their final 47 games into 84 days.

“It’s one of these situations you’re going to have to deal with,” Devils coach Lindy Ruff said, before being asked if it was fair.

“My dad used to tell me that a fair is something you go to in the summer time, jump on a ride, so I’ll leave it at that,” Ruff said.

Devils: Return home for two-game series against the Washington Capitals starting on Saturday.