Mathew Barzal had a goal and an assist, and Adam Pelech, Jordan Eberle, Jean-Gabriel Pageau, Anders Lee and Oliver Wahlstrom also scored to help the Islanders get their second straight victory and improve to 6-0-1 at home. Semyon Varlamov stopped 34 shots.

New York, which got its highest scoring output of the season, beat Boston for the third time in three meetings — three of the Bruins’ four regulation losses this season — to move one point behind Boston and Washington in the East. 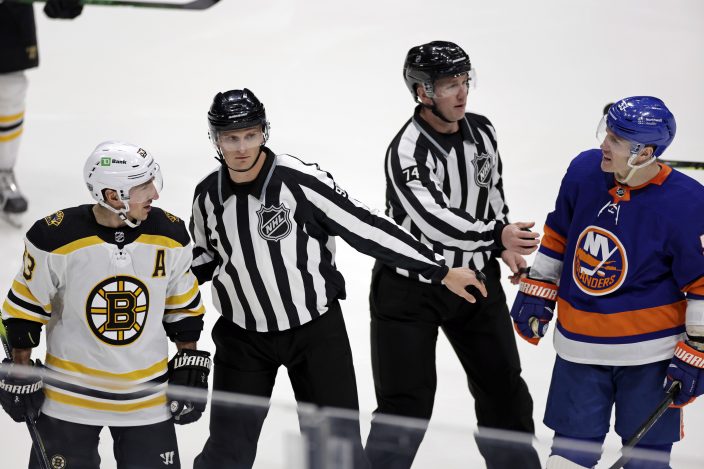 Nick Ritchie and Craig Smith scored for Boston, and Jaroslav Halak had 30 saves in his first game against the Islanders since leaving after the 2017-18 season.

Bratt, Miles Wood and Nico Hischier also scored for the Devils, and Mackenzie Blackwood stopped 29 shots. Zacha had two assists to extend his points streak to eight games in which he has three goals and seven assists.

Tom Wilson scored the go-ahead goal on a power play with 7:20 left and Washington beat Pittsburgh for its second victory in six games this season between the rivals.

Nicklas Backstrom scored his team-leading ninth goal of the season, and T.J. Oshie had one for the highlight reel in the third period when he dived one-handed to poke the puck past Tristan Jarry.

Carl Hagelin and Lars Eller each scored an empty-netter, and Vitek Vanecek made 26 saves in his 16th start of the season. Chris Tanev and Jake Guentzel scored for Pittsburgh.

Patrick Kane broke a scoreless tie in the third period with his 399th goal, Malcolm Subban got his first shutout of the season and Chicago beat Columbus to sweep the two-game series.

Carl Soderberg added an empty-net goal with 50 seconds left in the game. Subban had 26 saves to record his second shutout in 72 NHL games and his first as a member of the Blackhawks.

Curtis McElhinney stopped 31 shots and had an assist in Tampa Bay's victory over Carolina.

Mikhail Sergachev, Yanni Gourde and Barclay Goodrow scored for Tampa Bay. The Lightning have won three of the four straight meetings between the teams.

Aleksander Barkov and Anton Stralman also scored in the final 6 1/2 minutes as the Panthers overcame a 2-0 deficit. Sergei Bobrovsky made 37 saves.

Milan Lucic scored for Calgary in the first of three straight games between the teams.

Luke Glendening and Adam Erne also scored for Detroit, which set a season high for goals. Jonathan Bernier made 37 saves.

Mikael Granlund and Erik Haula scored for the Predators.