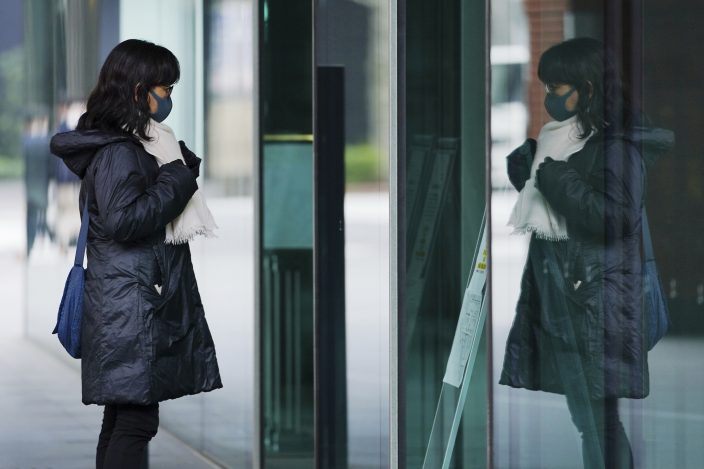 A woman wearing a face mask to help curb the spread of the coronavirus adjusts her scarf in her reflection on a window Friday, Feb. 26, 2021, in Tokyo. The Japanese capital confirmed more than 270 new coronavirus cases on Friday. (AP PhotoEugene Hoshiko) 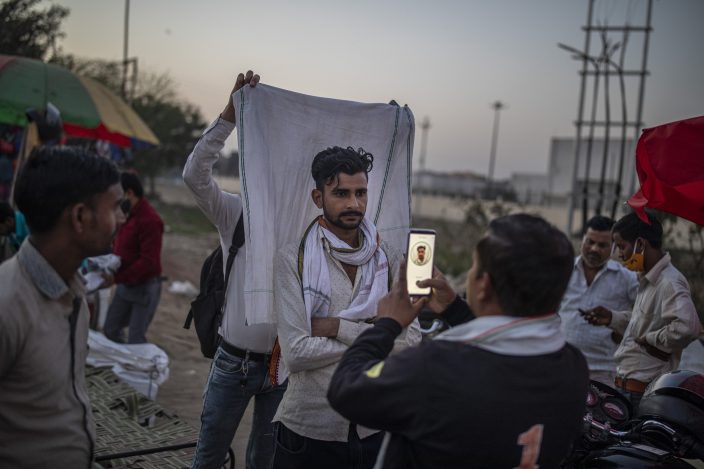 A roadside SIM card vendor takes a mugshot of a customer as another holds a white cloth as background before selling a mobile connection to him in Noida, a suburb of New Delhi, India, Thursday, Feb. 25, 2021. India has rolled out new regulations for social media companies and digital streaming websites to make them more accountable for the online content shared on their platforms. (AP PhotoAltaf Qadri)

SYRIA-IRAQ-UNITED STATES — A U.S. airstrike in Syria targeted facilities belonging to a powerful Iranian-backed Iraqi armed group, killing one of their militiamen and wounding a number of others, an Iraqi militia official says. The airstrike was the first military action undertaken by the Biden administration. By Qassim Abdul-Zahra, Lolita C. Baldor and Robert Burns. SENT: 810 words, photos.

VIRUS-OUTBREAK-PANDEMIC-PASSPORTS — Governments say getting vaccinated and having the proper documentation to prove it will smooth the way to recovery from the COVID-19 pandemic, and such efforts have gotten a head start in Israel. But that also raises the prospect of further dividing the world along the lines of wealth and access to vaccines, creating ethical and logistical issues that have alarmed decision-makers globally. By Laurie Kellman. SENT: 1,030 words, photos.

VIRUS-OUTBREAK-ROMANIA-HOSPITALS — Romania reported its first COVID-19 case a year ago this week. Since then, the country’s underfunded medical system has turned its focus to treating patients with coronavirus. But that has left many Romanians with other health problems deprived of the critical care they need, including patients who are HIV positive or have cancer. Romania’s government is acknowledging the problem and has announced plans to reorganize the country’s hospitals so that more non-COVID-19 patients can get access to health care. By Nicolae Dumitrache and Stephen McGrath. SENT: 700 words, photos. 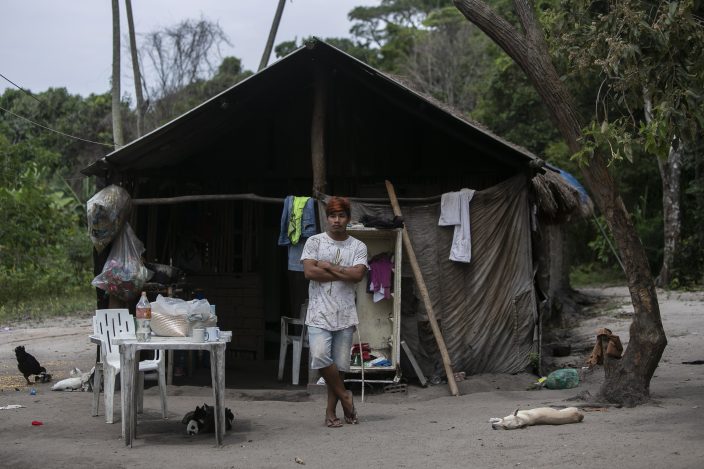 A Guarani man stands in front of his home in the Mata Verde Bonita village, in Marica, Rio de Janeiro state, Brazil, Thursday, Feb. 25, 2021, where healthcare workers are making the rounds with coolers containing doses of China's Sinovac COVID-19 vaccine as part of a mass immunization program aimed at inoculating all of Rio’s 16 million residents by the end of the year. (AP PhotoBruna Prado)

UNITED STATES-AFGHANISTAN — America’s longest war is approaching a crossroads. President Joe Biden’s choices in Afghanistan boil down to this: withdraw all troops by May and risk a resurgence of extremist dangers, or stay and possibly prolong the war in hopes of compelling the Taliban to make peace. By National Security Writer Robert Burns. SENT: 950 words, photos. With GERMANY—AFGHANISTAN — German defense minister visits troops in Afghanistan.

BIDEN-ECONOMY — The Senate parliamentarian’s decision that Democrats’ minimum wage hike has to be dropped from a massive COVID-19 relief bill the party is trying to speed through Congress comes as Democrats prepare for House approval Friday of an initial version of the $1.9 trillion package. By Alan Fram. SENT: 850 words, photos. Also see BIDEN below.

BIDEN-CABINET-BIAS-QUESTIONS — When Wyoming U.S. Sen. John Barrasso snapped at Deb Haaland during her confirmation hearing for Interior secretary, many in Indian Country were incensed. By Felicia Fonseca and Matthew Brown. SENT: 1,000 words, photos. 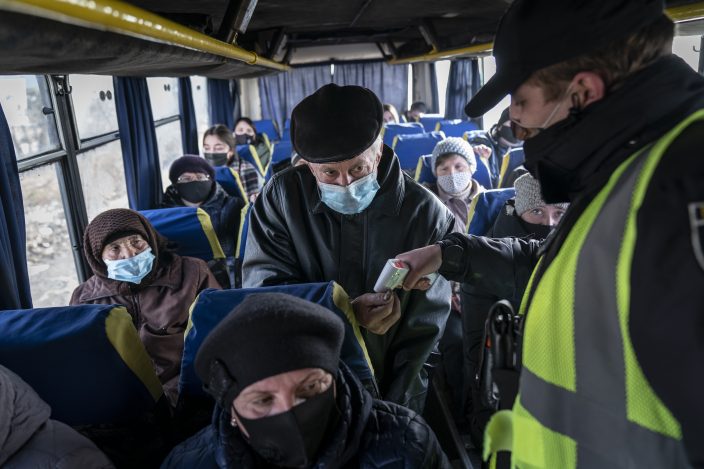 A policeman checks temperatures of passengers riding a bus at the checkpoint near Ivano-Frankivsk, Ukraine, Thursday, Feb. 25, 2021. Ukraine has recorded a 50% increase in the number of daily new coronavirus  infections, as the country takes the first steps in its vaccination campaign. Health Minister Maxim Stepanov said Thursday that 8,417 new infections were found over the past day, up from 5,424 a day earlier. (AP PhotoEvgeniy Maloletka) 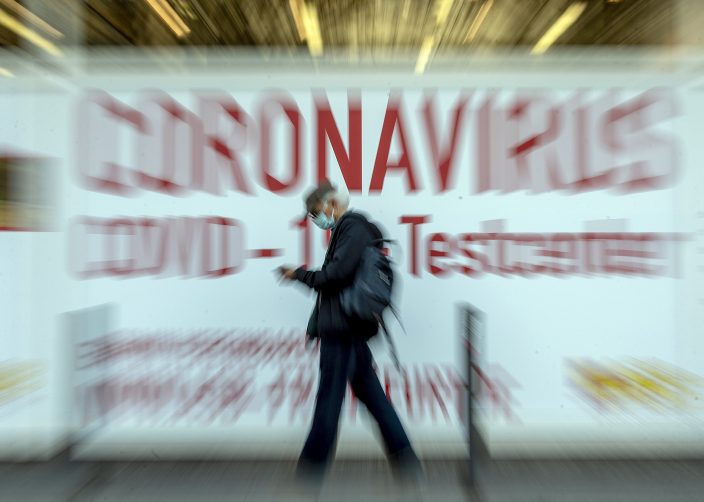 A man walks by a sign in the window of a Coronavirus testing center in Frankfurt, Germany, Thursday, Feb. 25, 2021. (AP PhotoMichael Probst) 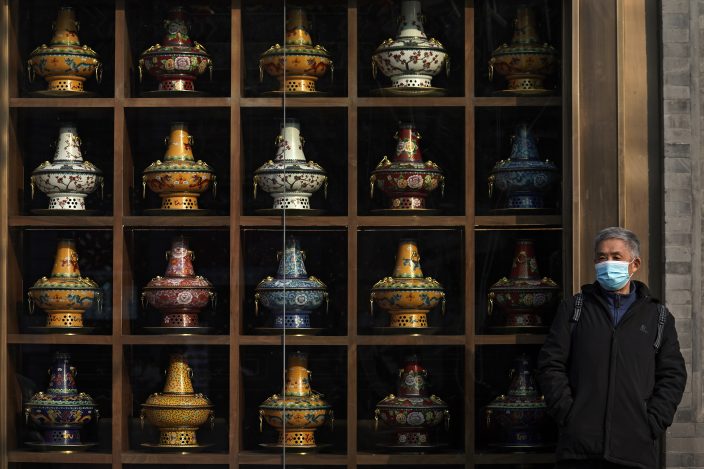 A man wearing a face mask to help curb the spread of the coronavirus stands outside a restaurant displaying various hot pot bowls on Qianmen Street, a popular tourist spot in Beijing on Thursday, Feb. 25, 2021. China has been regularly reporting no locally transmitted cases of COVID-19 as it works to maintain control of the pandemic within its borders. (AP PhotoAndy Wong) 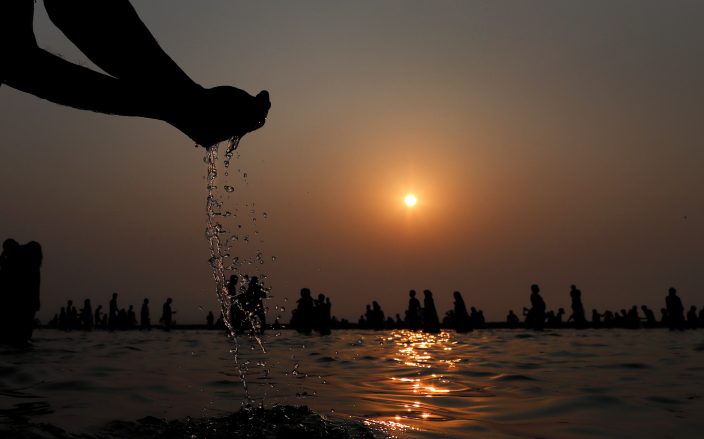 Pilgrims take holy dips early morning at Sangam, the sacred confluence of the rivers Ganga, Yamuna and the mythical Saraswati, during Magh Mela festival, in Prayagraj, India. Tuesday, Feb. 16, 2021. Hindus believe that ritual bathing on auspicious days can cleanse them of all sins. A tented city for the religious leaders and the believers has come up at the sprawling festival site with mounted police personnel keeping a close watch on the activities. The festival is being held amid rising COVID-19 cases in some parts of India after months of a steady nationwide decline. (AP PhotoRajesh Kumar Singh) 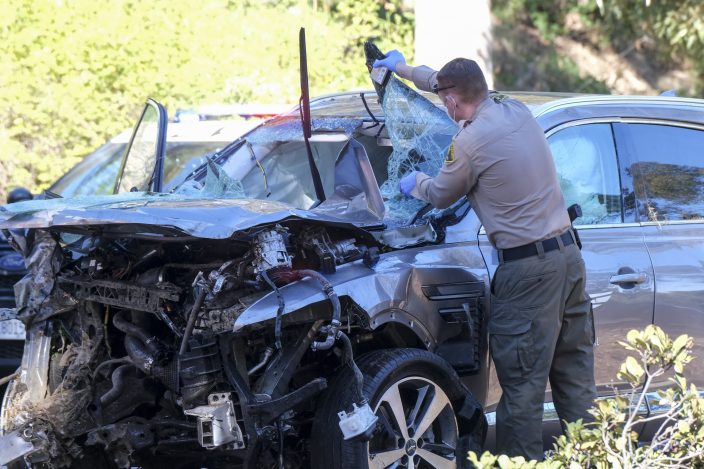 VIRUS-OUTBREAK-ASIA — South Korea administered its first available shots of coronavirus vaccines to people at long-term care facilities, launching a mass immunization campaign that health authorities hope will restore some level of normalcy by the end of the year. SENT: 790 words, photos. With VIRUS-OUTBREAK-THE-LATEST.

HONG KONG-VACCINES — Hong Kong began administering its first COVID-19 vaccines to the public, kicking off its program that will eventually offer free vaccinations to all 7.5 million residents. SENT: 400 words, photos.

JAPAN-VIRUS OUTBREAK — The state of emergency Japan set up to curb the spread of the coronavirus will be lifted in six urban areas this weekend and remain in the Tokyo area for another week. SENT: 350 words, photos.

VIRUS-OUTBREAK-MIDEAST — Two U.S. Navy warships operating in the Mideast have been affected by the coronavirus, authorities say, with one already at port in Bahrain and another heading to port now. SENT: 370 words, photos.

VIRUS OUTBREAK-SOMALIA-RESURGENCE — A resurgence of COVID-19 cases is hitting Somalia hard, straining one of the world’s most fragile health systems, while officials await test results to show whether a more infectious variant of the coronavirus is spreading. SENT: 580 words, photos.

MICHIGAN CONSERVATIVE PIVOT — Michigan Republicans, once the national model for the party’s mainstream, have lurched sharply rightward in the past decade. SENT: 1,100 words, photos.

BIDEN — Biden will put his empathy skills on display during a Texas visit with a dual mission: surveying damage caused by severe winter weather and encouraging people to get their coronavirus shots. SENT: 780 words, photos.

GEORGIA ELECTION-INVESTIGATION — The Georgia prosecutor investigating potential efforts by Donald Trump and others to influence last year’s general election has a message for people who are eager to see whether the former president will be charged: Be patient. SENT: 830 words, photos.

MILITARY-BASE-CONTAMINATED-WATER — The U.S. Air Force says it will be distributing bottled water to thousands of residents and business owners near its base in suburban Phoenix until at least April, marking the latest case of chemicals from military firefighting efforts contaminating the water supply in a nearby community. SENT: 700 words, photo.

RACIAL-INJUSTICE-KENTUCKY — A bill that would limit the use of “no-knock” warrants passed the Kentucky Senate unanimously, the latest effort to reform law enforcement tactics after the death of Breonna Taylor, a woman who was fatally shot when Louisville police broke down her door in the middle of the night. SENT: 490 words, photo.

TRUMP ADVISER-ARREST — The indictment lodging fraud charges against Trump’s former chief strategist Steve Bannon should not be dismissed despite his pardon, prosecutors told a judge, citing ill effects an indictment can leave on someone even without a conviction. SENT: 340 words.

AUSTRALIA-DIGITAL-PLATFORMS — Facebook announced preliminary agreements with three Australian publishers, a day after the Parliament passed a law that would make the digital giants pay for news. SENT: 500 words, photo.

FILM-REVIEW-BILLIE-EILISH:-THE-WORLD’S-A-LITTLE-BLURRY — If you’re coming to “Billie Eilish: The World’s a Little Blurry” hoping for a primer on the music sensation, you’ve come to the wrong place. By Film Writer Lindsey Bahr. SENT: 810 words, photos.

CHINA-BOX-OFFICE-BOOM — The thrills and chills of the big screen are back in the world’s biggest film market. SENT: 640 words, photos.

TIGER-WOODS-CRASH — Tiger Woods was moved to another Los Angeles hospital after undergoing surgery to his right leg after being badly injured in a car crash. SENT: 470 words, photos.

BEIJING-UYGHURS-SPONSORS — Activists and lawyers are targeting the IOC’s most high-profile sponsors tied to next year’s Beijing Winter Olympics as a way to bring light to reported human rights abuses in China against Muslim Uyghurs and other ethnic minorities. By Sports Writer Stephen Wade. SENT: 1,090 words, photos.