The town meeting, for centuries, was a staple of New England life — but the coronavirus pandemic could accelerate the departure from the tradition where people gather to debate everything from the purchase of local road equipment to multimillion-dollar budgets to pressing social issues.

The basis of the town meeting is to bring everyone together in the same room — sometimes a literal town hall, sometimes a school gymnasium — where voters will hash out local issues until a decision is made.

The restrictions on in-person gatherings imposed by the pandemic make that impossible. 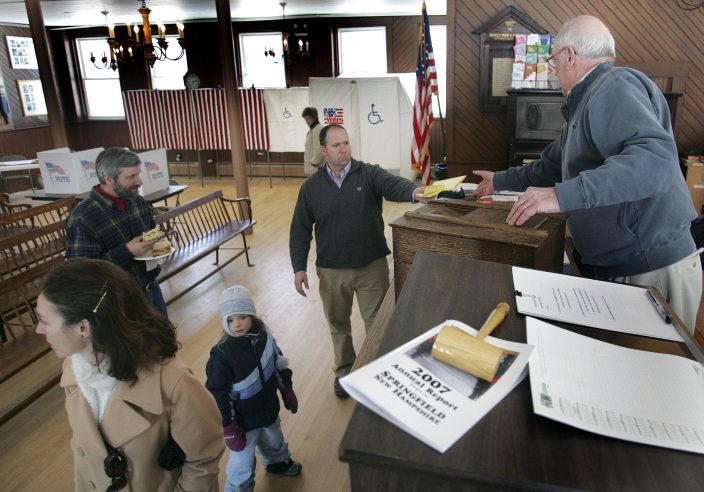 Some communities are delaying meetings this year until the virus will, hopefully, be more under control. Others are using pre-printed ballots to decide issues, forgoing the daylong debate altogether.

Some worry the temporary workaround could remain even after life returns to normal.

“I’d be very disappointed if people think that this is a new model because that would move us away completely from the essence of town meeting, which is the opportunity to assemble with our fellow voters, to hear from our elected officials directly, to question, to challenge them, to debate a budget and public questions in an assembled meeting,” said former Vermont Gov. Jim Douglas, who served for 33 years as moderator in his hometown of Middlebury. 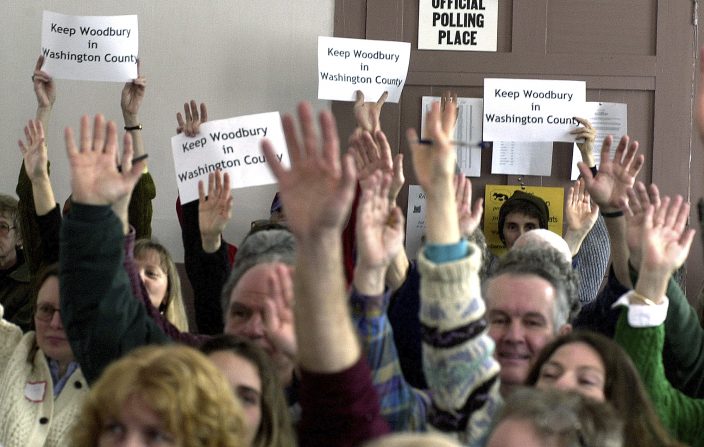 FILE - In this March 5, 2002, file photo, citizens vote to support a resolution concerning redistricting during the annual town meeting in Woodbury, Vt. The COVID-19 pandemic is disrupting New England town meetings in 2021, a tradition where citizens gather to debate and decide on local issues. (AP PhotoToby Talbot, File)

But others counter that the challenges of getting people together during town meeting, virus or no, restrict the number of people who can participate.

In Vermont, where the traditional Town Meeting Day — the first Tuesday in March — is a holiday, the state authorized towns this year only to decide local issues with pre-printed ballots. Most towns that chose the option held remote informational meetings to help voters make informed decisions.

In Middlesex, Vermont, voters will cast ballots Tuesday on a measure that, if approved, would have the town continue with the pre-printed ballots to decide everything — from appropriations for the local library to payments for social programs — but the town budget. 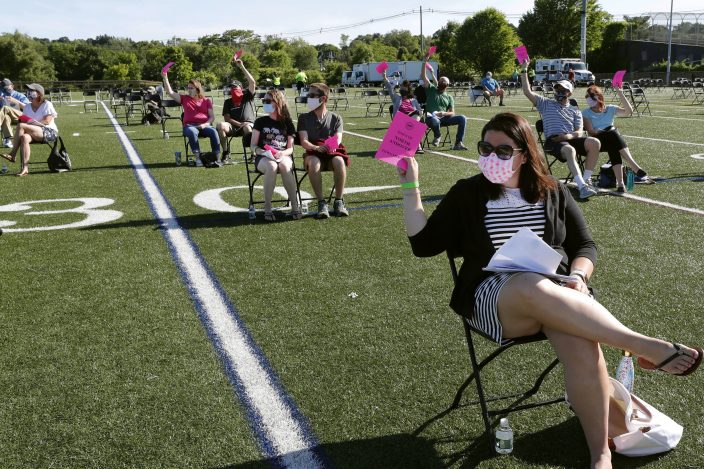 “The point of this is a lot of people feel they can’t ask any questions at town meetings,” said Dwire, who is running this year for a seat on the Middlesex select board. “It gives people a chance to participate in democracy and vote from 7 a.m. to 7 p.m.”

But others feel it would take something away from the process. 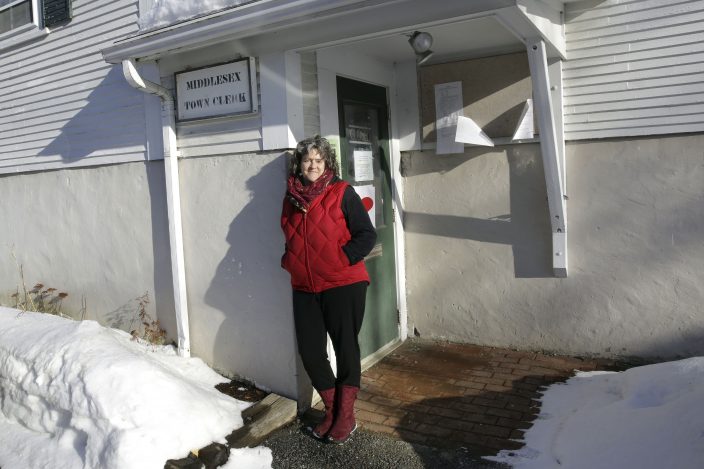 Vermont Secretary of State Jim Condos said he doesn’t take a position on the choices towns make about their meetings, but he understands why some are pushing for change.

A lot of people can’t attend traditional town meetings, which can last all day. 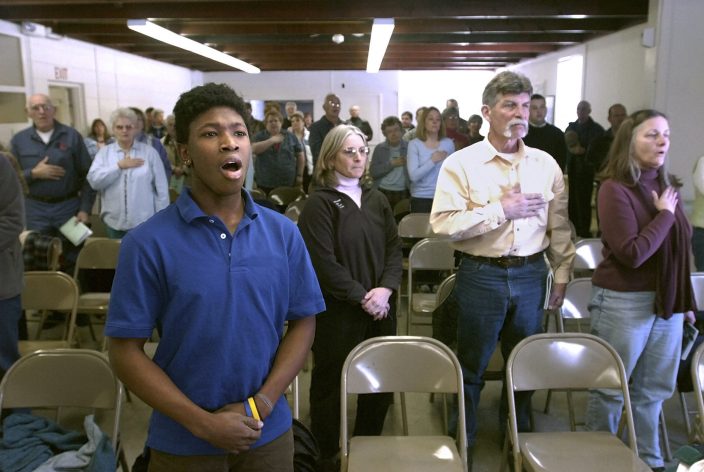 “They may live in one town and work in another town and its hard to get time off,” Condos said. “They may have kids, school, whatever it is that interferes with their lives. It’s not like it was 100 years ago.”

In Maine, the pandemic eliminated town meetings last year for more than 400 of the state’s 486 municipalities that hold meetings during the spring. Thanks to an emergency order from the governor, many Maine towns are again this year using the pre-printed secret ballot votes to make decisions.

“That democratic give-and-take is lost. But participation is better,” he said.

Town meetings evolved from the era when the first European settlers in what would eventually become the six New England states would gather in a meeting house, usually the church, and decide all local issues. They are still used in some form in all six New England states: Maine, New Hampshire, Vermont, Massachusetts, Connecticut and Rhode Island.

Over the centuries, the power was transferred to groups of local “select men" who were chosen to make the communities' decisions and the system has continued to evolve, said Douglas, the former Vermont governor.

In Massachusetts, where some of the first New England town meetings were established in the 1630s, 300 of 351 municipalities continue to hold town meetings in some form, according to Secretary of State William Galvin’s office.

Last year, Massachusetts lawmakers allowed towns to postpone their annual town meetings to the summer, enabling many to hold them outdoors after the initial virus surge subsided.

In New Hampshire, traditional town meetings are held the second Tuesday in March. Last year in Henniker, the March town meeting was postponed to June and then July, when voters spread out in a school.

This year, Henniker officials decided to proceed with a March 13 meeting, with voters spaced out as much as possible in a gymnasium.

“I hope it will endure. If we keep having things like this, then I think we’ll have to re-examine the situation, but I hope this is a once in a lifetime thing and we can get back to normal,” said Henniker town moderator Cordell Johnstone. “At that point, it’s question of whether town meeting is a viable way of running town and I think for most towns, it is.”