Myanmar’s U.N. ambassador strongly opposed the military coup in his country and appealed for “the strongest possible action from the international community” to restore democracy in a dramatic speech to the U.N. General Assembly Friday that drew loud applause from diplomats from the world body’s 193 nations.

“It is time for the military to immediately relinquish power and release those detained,” he said. “We will continue to fight for a government which is of the people, by the people, for the people.” 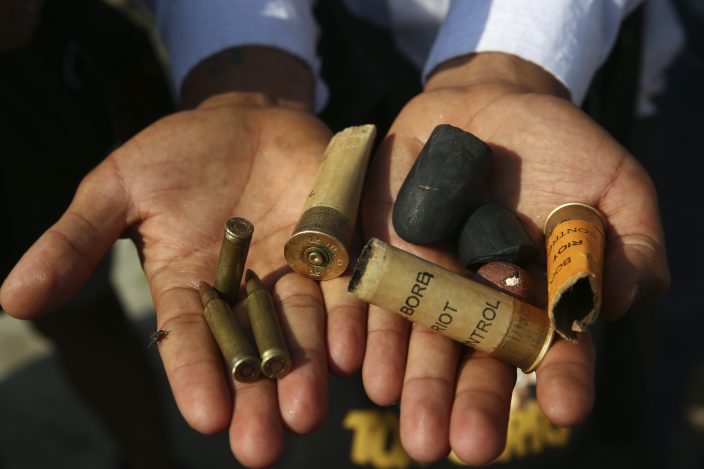 Tun’s surprise statement not only drew applause but commendations from speaker after speaker at the assembly meeting including ambassadors representing the European Union, the Organization of Islamic Cooperation and the new U.S. ambassador, Linda Thomas Greenfield, who joined others in calling it “courageous.”

She said the United States “stands in solidarity” with the people of Myanmar who are in the streets protesting the coup and reiterated President Joe Biden’s warning that “we will show the military their actions have consequences” and his appeal to the military “to immediately relinquish power.”

The assembly meeting was called to hear a briefing from the U.N. special envoy for Myanmar, Christine Schraner Burgener, who said it is time to “sound the alarm” about the coup, ongoing violations of the constitution and reversal of reforms instituted by Suu Kyi, who was previously the de facto head of government. Thousands of students march along main road during an anti-coup street march in Mandalay, Myanmar, Friday, Feb. 26, 2021. Tensions escalated Thursday on the streets of Yangon, Myanmar's biggest city, as supporters of Myanmar's junta attacked people protesting the military government that took power in a coup, using slingshots, iron rods and knives to injure several of the demonstrators. (AP Photo)

She pointed to restrictions on internet and communication services, the detention of about 700 people according to the Assistance Association for Political Prisoners in Myanmar.

The huge protests in the country are not about a fight between Suu Kyi’s party and the military, she said, “it is a people’s fight without arms.”

Addressing diplomats in the General Assembly chamber by video link, Schraner Burgener urged “all of you to collectively send a clear signal in support of democracy in Myanmar.” 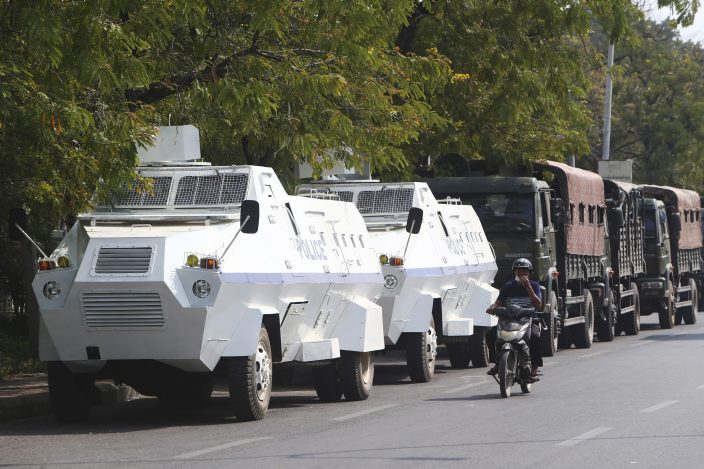 Police armed vehicles park along a main road after protesters were dispersed in Mandalay, Myanmar, Friday, Feb. 26, 2021. In the country’s second-largest city, anti-coup protesters took to the streets Friday. By midday, security forces had blocked the main road in downtown Mandalay to prevent the protesters from gathering. (AP Photo)

The Feb. 1 military takeover in Myanmar shocked the international community and reversed years of slow progress toward democracy. Suu Kyi’s party would have been installed for a second five-year term that day, but the army blocked Parliament from convening and detained her, President Win Myint and other top members of her government.

Myanmar’s military says it took power because last November’s election was marked by widespread voting irregularities, an assertion that was refuted by the state election commission, whose members have since been replaced by the ruling junta. The junta has said it will rule for a year under a state of emergency and then hold new polls.

Schraner Burgener told the General Assembly that “democratically elected representatives were able to be sworn in according to the constitution on Feb. 4 and have formed the Committee Representing Pyidaungu Hluttaw known as CRPH" and are seeking “to uphold their obligations to serve the people who voted for them.”

Tun, the Myanmar ambassador, began his remarks to the assembly by reading a statement from CRPH stressing the legitimacy of the election results, declaring that the military overthrew the democratically elected government, citing the massive opposition by the people, and stressing that “now is not the time for the international community to tolerate crimes of the military” and the coup.

“We ask the international community to take action,” the parliamentarians’ statement said.

UN backs democracy in Myanmar and urges release of detainees