Pythons, iguanas, monitor lizards, oh my! Florida is moving to restrict 16 invasive reptile species that have wreaked havoc in the Everglades and across the state.

Burmese pythons, in particular, have been especially destructive to native wildlife.

“Breeding invasive species in Florida is like playing with matches in a tinder box,” said Julie Wraithmell, vice president and executive director of Audubon Florida. 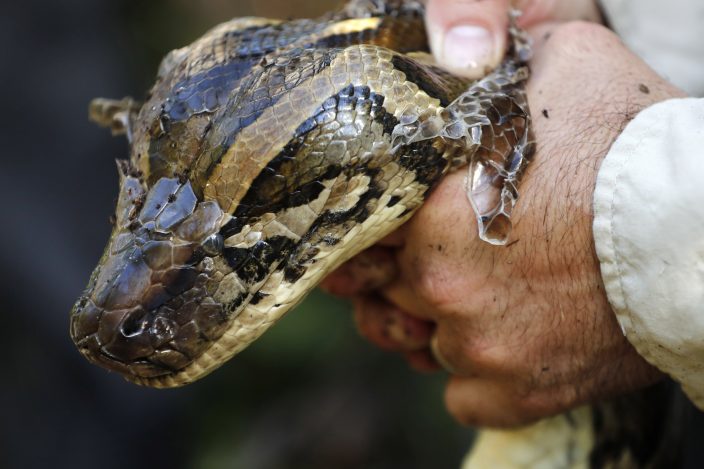 FILE - In this Oct. 23, 2019 file photo, a 14-foot, 95-pound, female Burmese python is held tightly by wildlife biologist Ian Bartoszek after he captured the snake in Naples, Fla. Iguanas, Burmese pythons, monitor lizards and many other reptile invasive species have taken hold in Florida. The Florida Fish and Wildlife Conservation Commission voted Thursday, Feb. 25, 2021, to move these animals onto a prohibited list. That means they can only be brought to Florida for exhibition, such as a zoo, and at a research facility. (AP PhotoRobert F. Bukaty)

The Florida Fish and Wildlife Conservation Commission voted Thursday to move these animals to a prohibited list. That means they can only be brought to Florida for exhibition, such as a zoo, or at a research facility.

“These animals are creating enormous issues for our state,” said Rodney Barreto, chair of the commission. “The environment trumps the livelihood on this one, unfortunately."

The rules are complicated. Once they take effect, pet owners and others who have these species will have 180 days to ensure the creatures come into compliance with outdoor caging rules.

Iguanas and tegu lizards can be sold commercially until June 30, 2024. After that date, their sale in Florida will be banned. Both are very well established throughout South Florida.

Many people involved in the reptile trade and pet owners have weighed in on the issue. The rules do not require anyone to relinquish their pets and a permit will be at no cost.

“I'm very sensitive to the people in the pet trade and enthusiasts,” said Robert Spottswood, a member of the Florida commission. “But this action is a result of the invasive species that continue to get in the wild. These animals are doing lots of damage and we are incumbent to do something.”

According to the wildlife commission, there are more than 500 non-native species in Florida. Most have been brought in through the live animal trade and then escape or are released into the wild.

The animals under new restrictions include a variety of pythons, green iguanas, tegu lizards, Nile monitors and others. Some kill native Florida wildlife as well as pets, while others dig burrows and become a threat to human constructions such as manmade fountains and gardens.