Decades after going to prison, some of the men responsible for the World Trade Center bombing that killed six people 28 years ago Friday are still trying to whittle down their onetime life sentences on the remote chance that they could someday be freed.

And they are having some success.

In the last year, four men implicated in the 1993 bombing have won reductions to their sentences after one part of their convictions was dropped to be consistent with a recent U.S. Supreme Court ruling. 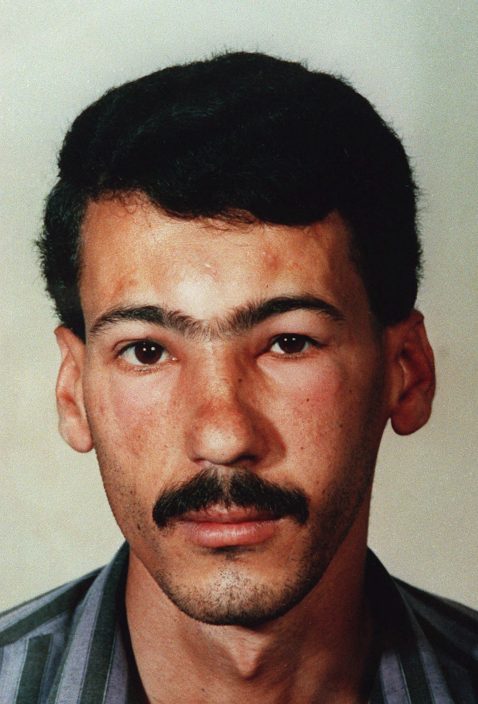 FILE - In this 1991 file photo, Ahmad Ajaj, is one of four men convicted in 1994 of conspiracy, explosives charges and assault in the Feb. 26, 1993 World Trade Center bombing. Decades after going to prison, some of the men responsible for the World Trade Center bombing that killed six people 28 years ago, Feb. 26, 2021, are still trying to whittle down their onetime life sentences on the remote chance that they could someday be freed. (AP PhotoRick Bowmer, File)

Once each sentenced to 240 years in prison, appeals have won them sentence deductions as they continue efforts to get judges to take fresh looks at their cases.

While unlikely, all four could be freed if they live long enough.

All received sentence reductions in the last year. All would face deportation.

Historically, incarceration has not been recommended for longevity. Ajaj noted in a court filing last year that he has chronic health problems after facing cancer, the removal of his left lung and a severe spinal disorder.

Friends and relatives of the six bombing victims participated Friday in a pair of events to mark the anniversary of the terrorist attack, in which 1,200 pounds of explosives hidden in a van detonated in a garage beneath the twin towers. It left a crater half the size of a football field.

The Port Authority of New York and New Jersey held a virtual Mass at the St. Francis of Assisi Church in Manhattan, honoring the four employees it lost in the attack: Robert Kirkpatrick, 61, Stephen Knapp, 48, Bill Macko, 47, and Monica Smith, who was 35 and pregnant when she died.

Also killed were John DiGiovanni, 45, who had parked in the garage, and Wilfredo Mercado, 37, who worked for the Windows on the World Restaurant.

Because of the pandemic, the National 9/11 Memorial and Museum held a hybrid memorial, with some relatives and survivors gathering at the 9/11 Memorial for a private midday ceremony and about 60 others watching a Zoom feed. Flowers and small flags affixed with photos of the victims were placed next to their names on a plaque overlooking on of the site’s two reflecting pools.

The names of the victims were read, a bell tolled at the time of the attack — 12:17 p.m. — and a pipe and drum band performed “Amazing Grace.” Some of the people watching the stream wiped away tears or placed a hand to their face as the ceremony concluded.

The original sentencing judge, Kevin Duffy, was killed by the virus last year. He had fashioned the 240-year sentences by calculating the balance of the life expectancies of the six individuals killed in the blast — 180 years — and adding 30 years each on two other counts.

The bombers who had their sentences reduced were arrested in the intense FBI probe that followed the blast. A vehicle identification number on the Ryder van that carried the bomb was found on a piece of the wreckage and the FBI was waiting when Salameh went to the rental office a week later to try to get his $400 deposit back.

Ayyad, a chemist, ordered chemicals for the bomb. Ajaj, who was in jail on a false-passport conviction at the time of the attacks, had been arrested as he entered the U.S. with materials about bombmaking. Abouhalima was frequently seen at the apartment where the bomb was built. All maintained they were innocent.

Two years after the blast, Ramzi Yousef was arrested in Pakistan and brought to the U.S., where he was convicted at two separate trials. In one, he was convicted in a plot to blow up a dozen U.S. airliners.

In a 2012 memorandum, Duffy called Yousef “a cold-blooded killer, completely devoid of conscience.”

In a second trial, he was convicted as the mastermind of the 1993 bombing. Now 52, he is serving a life prison term. His uncle, Khalid Sheikh Mohammed, is awaiting a military tribunal on charges that he masterminded the Sept. 11 terrorism attacks, which destroyed the World Trade Center eight years after the initial bombing failed to bring them down.

Although he never got back the $400 deposit on the van used in the 1993 bombing, Salameh has remained in pursuit of funds and in 2019 won a court order requiring U.S. authorities to return to his prison account the $2,615 in U.S. currency and 32 dinars he maintained were taken after his arrest.

Judge Lewis A. Kaplan this month noted in an order that Salameh has not yet received the money. He told him a contempt-of-court citation was not an option but Salameh possibly could pursue an action against the U.S. treasury secretary if he doesn't get the money soon.