Diplomats sat beside stacks of briefing papers, flanked by flags and emphasized their closeness. But they were geographically far apart Friday as Secretary of State Antony Blinken, because of the pandemic, started a new chapter in North American relations with virtual visits to Mexico and Canada in what was billed as his first official trip.

Though symbolically important in any administration, the decision by President Joe Biden to dispatch Blinken to Mexico and Canada for the first visits, even virtually, is part of a broader effort to turn the page from a predecessor who at times had fraught relations with both nations. During Trump's presidency, the three nations signed a revamped trade accord after Trump demanded a renegotiation of the North American Free Trade Agreement.

The secretary began his virtual visits with Mexico, a country former President Donald Trump repeatedly disparaged in his campaign and early in his presidency, though relations turned more cordial under President Andres Manuel Lopez Obrador. 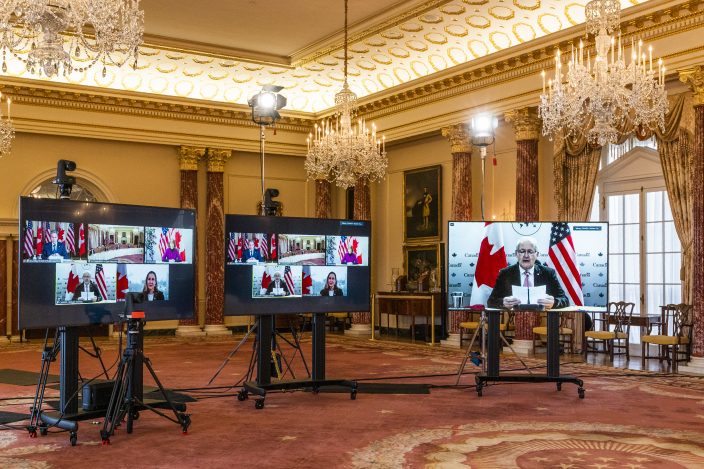 Canadian Foreign Minister Marc Garneau, right, who is in Ottawa, Canada is seen speaking through a video monitor to State Secretary Antony Blinken during a virtual meeting at the State Department in Washington, Friday, Feb. 26, 2021. (AP PhotoManuel Balce Ceneta, Pool)

“I wanted to ‘visit,’ in quotation marks, Mexico first to demonstrate the importance that we attach, President Biden attaches, to the relationship between our countries,” Blinken told his counterpart, Foreign Secretary Marcelo Ebrard.

Blinken’s meetings with Mexico and Canada, two of the largest U.S. trading partners, were expected to cover economic ground as well as well as efforts to fight COVID-19, which has prompted all three countries to close the borders to all but essential traffic.

Biden last week made his first bilateral meeting, also virtual, with Canadian Prime Minister Justin Trudeau, who at times had a frosty relationship with Trump. Biden disappointed some in Canada with his decision upon taking office to reverse Trump and revoke the permit for the Keystone XL Pipeline, which President Barack Obama's administration determined had only limited energy and economic benefits to the U.S. and conflicted with efforts to curb climate change. 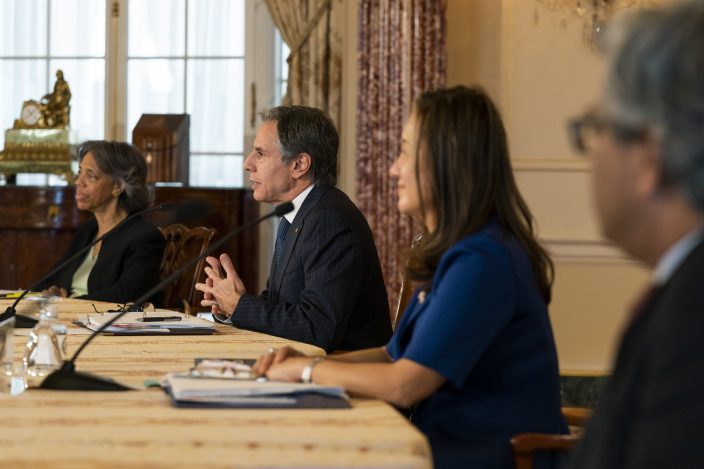 That didn’t come up in the public portion of Blinken’s meeting with Foreign Minister Marc Garneau, who echoed Trudeau in praising Biden’s commitment to “renew U.S. leadership and diplomacy.”

Ebrard, for his part, welcomed Biden's decision to reverse his predecessor and rejoin both the Paris climate accord and the World Health Organization. He also praised the “initiatives” of the new administration, an apparent reference to the decision to set a new course on some immigration and border policies.

“We understand that these are being done in recognition to the Mexican community,” he said, without mentioning any specific policy. “We are receiving them with empathy.” 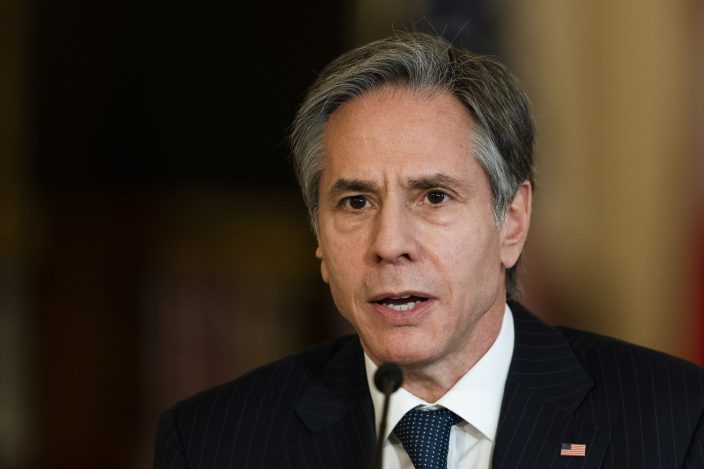 Biden ended Trump's policy of requiring migrants seeking asylum to wait in Mexico or to pursue their claims in Central America. He also restored protection for people without legal status in the U.S. who were brought to the country as children, many of whom are Mexican, and is backing legislation that would enable them to seek citizenship.

The Biden administration has begun processing the asylum claims of about 25,000 migrants who had been in Mexico, often in unsanitary and dangerous conditions, but has not lifted a policy, imposed at the start of the COVID-19 outbreak, of quickly expelling people captured along the border and has sought to discourage illegal migration.

Just before his visit with Ebrard, Blinken conducted a virtual tour of the busy border crossing at El Paso, Texas, and said the administration is working with Mexico and Central American nations to ease the conditions that drive people to try to illegally reach the United States.

“To anyone thinking about undertaking that journey, our message is: Don’t do it. We are strictly enforcing our immigration laws and our border security measures," he said.

German soccer teams will be confin ...