Ryan Strome had a goal and two assists and Chris Kreider had a goal and an assist in New York's three-goal second period, leading the Rangers to a 6-2 win over the Boston Bruins on Friday night.

Julian Gauthier, Colin Blackwell, Pavel Buchnevich and Jonny Brodzinski also scored to help the Rangers get their third win in four games. Adam Fox and Ryan Lindgren each had two assists, and Alexandar Georgiev stopped 31 shots to improve to 2-0-2 in his last four starts. 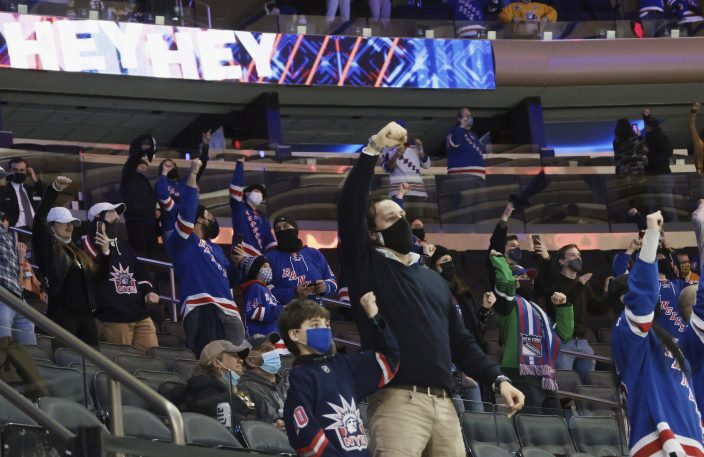 After the game, the Rangers gathered at center-ice to salute the 1,800 fans in attendance before skating off. Several players gave their sticks to some of the fans.

Brad Marchand had a goal and an assist, Patrice Bergeron also scored and David Pastrnak had two assists for Boston. Tuukka Rask finished with 28 saves in the Bruins' fourth loss in five games.

The Bruins, who lost 7-2 at the New York Islanders on Thursday night, had not given up more than four goals in their first 16 games. 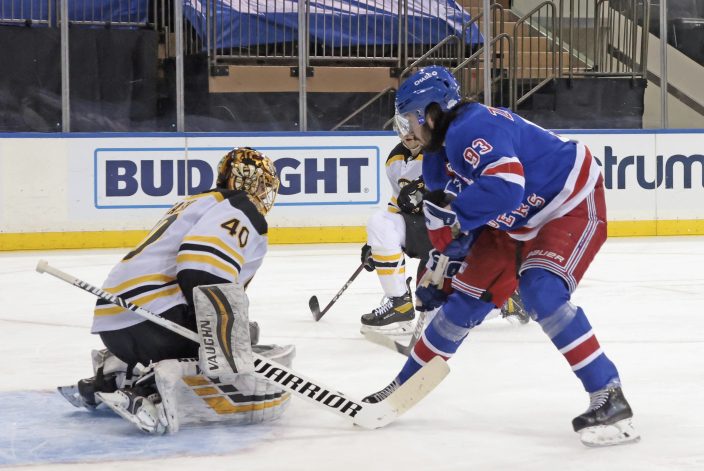 With Boston trailing 1-0, Jack Studnicka nearly tied the score early in the second period with a shot that hit off the crossbar.

The Rangers doubled the lead shortly after that. On a rush, Alexis Lafreniere sent a cross-ice pass to Strome, who tapped it in past Rask from the right side for his sixth at 2:32. Lafreniere, the top overall pick in the 2020 NHL draft, got his first career assist.

Bergeron pulled the Bruins to 2-1 just 90 seconds later, scoring from the right doorstep off Pastrnak's pass from the left circle. 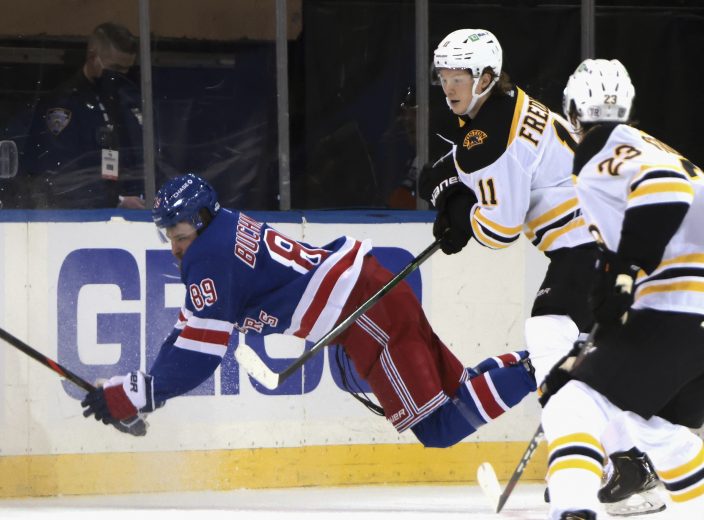 Charlie Coyle hit a goal post on a Bruins power play with about 6:50 left.

Blackwell tipped Adam Fox's one-timer from the point on a power play to push the lead to 3-1 with 1:08 remaining in the second. It was Blackwell's third goal in five games.

Kreider gave the Rangers a three-goal lead just 12 seconds later as his shot from a sharp angle deflected off Coyle's left skate and past Rask for his ninth. Kreider, who had his third career hat trick against Philadelphia on Tuesday night, scored for the third straight game. 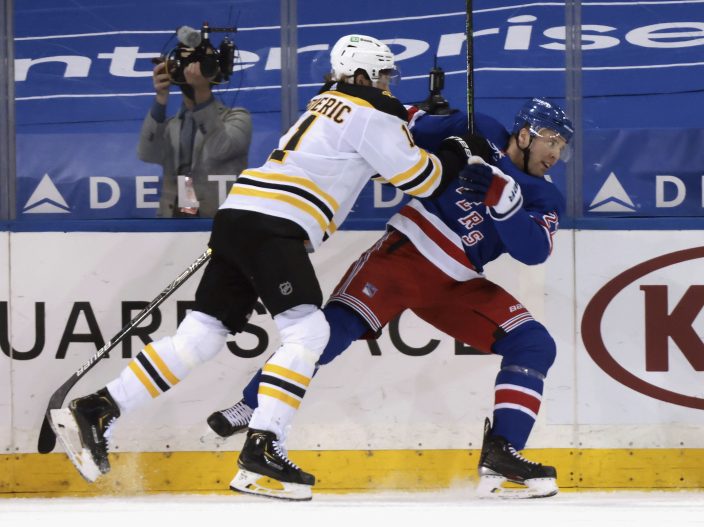 Buchnevich made it 5-1 on a tip-in 1:45 into the third, and Brodzinski got his first with the Rangers as he scored on a diving tip of a pass from Kevin Rooney at 3:43.

Marchand got the Bruins within four as he swooped in and knocked in the rebound of Pastrnak's shot at 7:51 for his 10th. It was Marchand's 300th career goal.

Gauthier got the Rangers on the scoreboard with 6:44 left in the first, firing a shot from the left circle between a screened Rask and the left post for his second career goal. 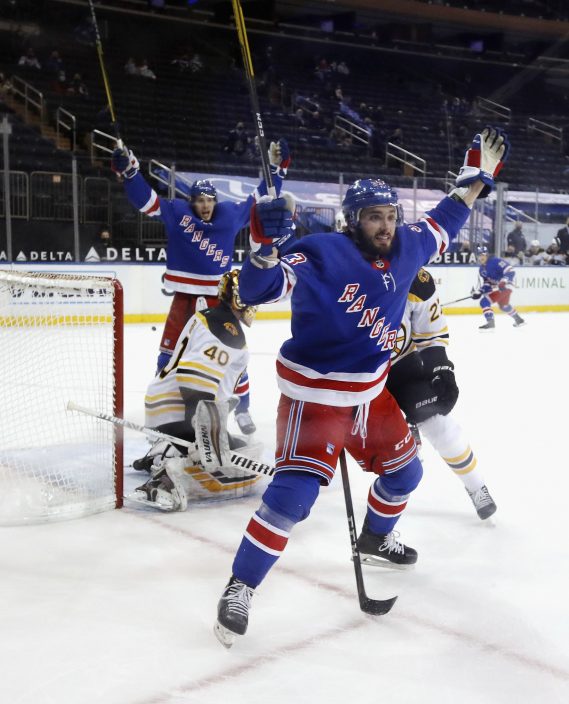 Kreider, who had his third career hat trick against Philadelphia on Tuesday night, scored for the third straight game. He has five goals and an assist in that stretch. ... Strome extended his point streak to four games. 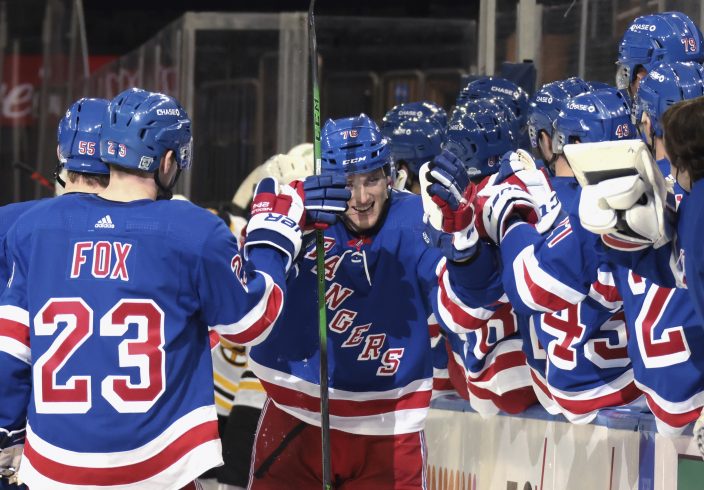 New York Rangers' Jonny Brodzinski (76) is congratulated after scoring against the Boston Bruins during the third period of an NHL hockey game Friday, Feb. 26, 2021, in New York. (Bruce BennettPool Photo via AP)

The Bruins are 3 for 21 on the power play over their last eight games after going 12 for 34 over the first 10.

The Rangers scored a power-play goal for the fourth straight game, going 5 for 19 over that stretch. They were 2 for 31 over their previous 10 games. 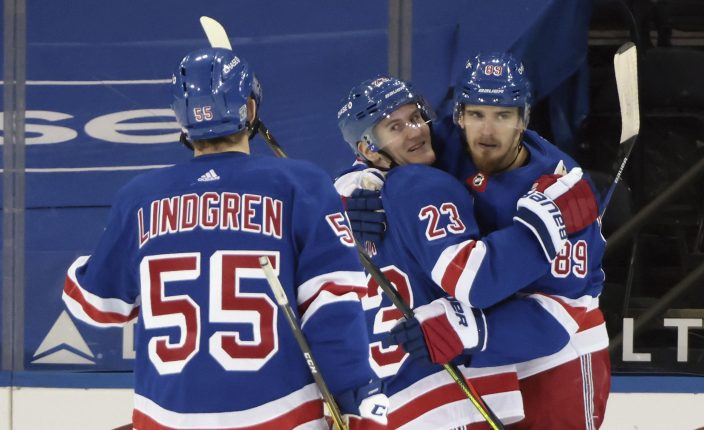 Bergeron's goal gave him 889 career points, breaking a tie with Bobby Orr to take over sole possession of fifth place on the Bruins' franchise list.

Bruins: At New York Rangers on Sunday to open a two-game series.

Rangers: Host Boston on Sunday to wrap up a two-game series.

Iran began enriching uranium up to ...