The “Trump-made-me-do-it” defense is already looking like a longshot.

Facing damning evidence in the deadly Capitol siege last month — including social media posts flaunting their actions — rioters are arguing in court they were following then-President Donald Trump's instructions on Jan. 6. But the legal strategy has already been shot down by at least one judge and experts believe the argument is not likely to get anyone off the hook for the insurrection where five people died, including a police officer.

“This purported defense, if recognized, would undermine the rule of law because then, just like a king or a dictator, the president could dictate what’s illegal and what isn’t in this country," U.S. District Judge Beryl Howell said recently in ordering pretrial detention of William Chrestman, a suspected member of the Kansas City-area chapter of the Proud Boys. “And that is not how we operate here.” 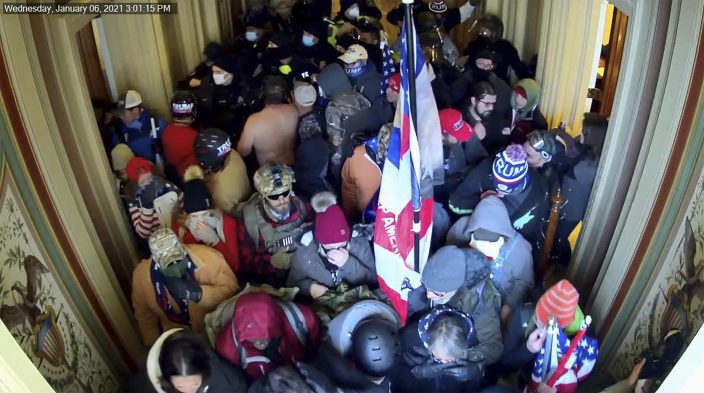 This image provided by the FBI taken from a video security camera in the U.S. Capitol building on Jan. 6, 2021, shows a man wearing a Trump 2020 winter cap and a bullet proof vest beside a wooden coat rack, standing among other rioters. The FBI identified the man as Dustin Thompson. Federal authorities say Thompson illegally entered the U.S. Capitol on Jan. 6 and while he was there stole the coat rack. (The FBI via AP)

Chrestman’s attorneys argued in court papers that Trump gave the mob “explicit permission and encouragement” to do what they did, providing those who obeyed him with “a viable defense against criminal liability.”

“It is an astounding thing to imagine storming the United States Capitol with sticks and flags and bear spray, arrayed against armed and highly trained law enforcement. Only someone who thought they had an official endorsement would even attempt such a thing. And a Proud Boy who had been paying attention would very much believe he did,” Chrestman’s lawyers wrote.

Trump was acquitted of inciting the insurrection during his second impeachment trial, where Democrats made some of the same arguments defense attorneys are making in criminal court. Some Republican lawmakers have said the better place for the accusations against Trump is in court, too. 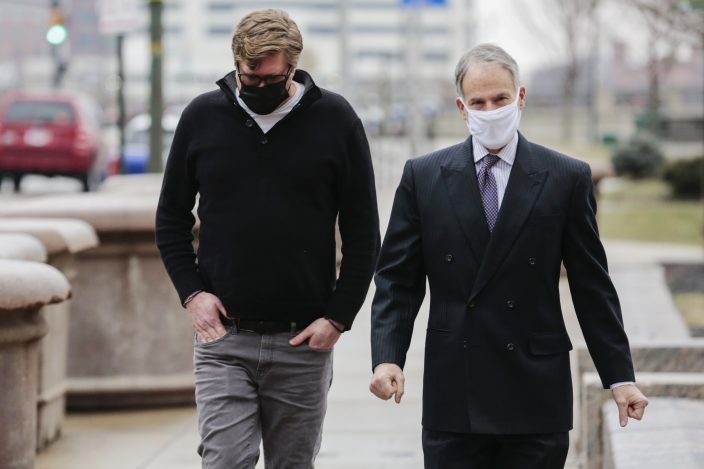 Dustin Thompson, left, of Columbus, who is accused of being part of the Jan. 6 insurrection at the U.S. Capitol, arrives with his lawyer, Sam Shamansky, to turn himself in on Monday, Jan. 25, 2021, at the Joseph P. Kinneary U.S. District Courthouse in Columbus, Ohio. (Joshua A. BickelThe Columbus Dispatch via AP)

Meanwhile, prosecutors have brought charges against more than 250 people so far in the attack, including conspiracy, assault, civil disorder and obstruction of an official proceeding. Authorities have suggested that rare sedition charges could be coming against some. Hundreds of Trump supporters were photographed and videotaped storming the Capitol and scores posted selfies inside the building on social media, so they can’t exactly argue in court they weren’t there. Blaming Trump may be the best defense they have.

“What’s the better argument when you’re on videotape prancing around the Capitol with a coat rack in your hand?” said Sam Shamansky, who’s representing Dustin Thompson, an Ohio man accused of stealing a coat rack during the riot.

Shamansky said his client would never have been at the Capitol on Jan. 6 if Trump hadn’t “summoned him there.” Trump, he added, engaged in a “devious yet effective plot to brainwash” supporters into believing the election was stolen, putting them in the position where they “felt the the need to defend their country at the request of the commander in chief.” 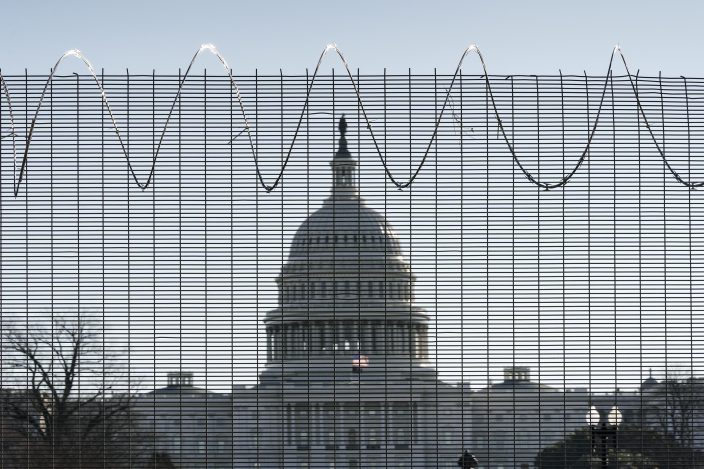 “I think it fits perfectly,” he said of the defense. “The more nuanced question is: Who is going to buy it? What kind of jury panel do you need to understand that?”

While experts say blaming Trump may not get their clients off the hook, it may help at sentencing when they ask the judge for leniency.

“It could likely be considered a mitigating factor that this person genuinely believed they were simply following the instructions of the leader of the United States,” said Barbara McQuade, a former U.S. attorney in Michigan who's now a professor at the University of Michigan Law School.

It could also bolster any potential cases against the former president, experts say.

“That defense is dead on arrival,” said Bradley Simon, a New York City white-collar criminal defense attorney and former federal prosecutor. “But I do think that these statements by defendants saying that they were led on by Trump causes a problem for him if the Justice Department or the attorney general in D.C. were to start looking at charges against him for incitement of the insurrection.”

While the legal bar is high for prosecuting Trump in the Capitol siege, the former president is already facing a lawsuit from Democratic Rep. Bennie Thompson that accuses him of conspiring with extremist groups to prevent Congress from certifying the election results. And more lawsuits could come.

Trump spread baseless claims about the election for weeks and addressed thousands of supporters at a rally near the White House before the Capitol riot, telling them that they had gathered in Washington "to save our democracy." Later, Trump said, “I know that everyone here will soon be marching over to the Capitol building to peacefully and patriotically make your voices heard.”

A lawyer for Jacob Chansley, the shirtless man who wore face paint and a hat with horns inside the Capitol, attached a highlighted transcript of the Trump's speech before the riot to a court filing seeking Chansley's release from custody. The defense lawyer, Albert Watkins, said the federal government is sending a “disturbingly chilling message” that Americans will be prosecuted “if they do that which the President asks them to do.”

Defense lawyers have employed other strategies without better success. In one case, the judge called a defense attorney’s portrayal of the riots as mere trespassing or civil disobedience both “unpersuasive and detached from reality.” In another, a judge rejected a man’s claim that he was “duped” into joining the anti-government Oath Keepers group and participating in the attack on the Capitol.

Other defendants linked to militant groups also have tried to shift blame to Trump in seeking their pretrial release from jail. An attorney for Jessica Watkins said the Oath Keepers member believed local militias would be called into action if Trump invoked the Insurrection Act to stay in office. Watkins disavowed the Oath Keepers during a court hearing on Friday, saying she has been “appalled” by fellow members of the far-right militia.

“However misguided, her intentions were not in any way related to an intention to overthrow the government, but to support what she believed to be the lawful government,” her lawyer wrote.

Meanwhile, a lawyer for Dominic Pezzola, another suspected Proud Boy, “acted out of the delusional belief that he was a ‘patriot’ protecting his country." Defense attorney Jonathan Zucker described Pezzola as “one of millions of Americans who were misled by the President's deception.”

“Many of those who heeded his call will be spending substantial portions if not the remainder of their lives in prison as a consequence," he wrote. “Meanwhile Donald Trump resumes his life of luxury and privilege."

The streets of Houston’s Third War ...