As many as 10 death row inmates in Oklahoma, more than one-fifth of the state’s prisoners condemned to die, could escape execution because of a recent U.S. Supreme Court ruling concerning criminal jurisdiction in Indian Country.

The inmates have challenged their convictions in state court following the high court’s ruling last year, dubbed the McGirt decision, that determined a large swath of eastern Oklahoma remains an American Indian reservation. The decision means that Oklahoma prosecutors lack the authority to pursue criminal charges in cases in which the defendants, or the victims, are tribal citizens.

Among the inmates likely to get a new trial in federal court is Shaun Michael Bosse, 38, who was convicted and sentenced to death in the 2010 killing of Katrina Griffin and her two young children. The victims were all found inside a burning mobile home near Dibble, about 35 miles (56 kilometers) south of Oklahoma City. 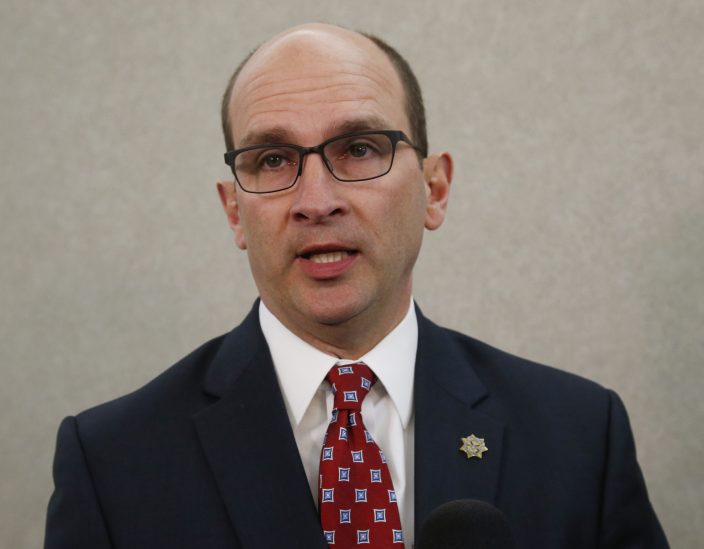 FILE - In this Friday, Dec. 15, 2017 file photo, Cleveland County District Attorney Greg Mashburn talks with the media in Norman, Okla. As many as ten death row inmates in Oklahoma, more than one-fifth of the state's prisoners condemned to die, could escape the death penalty because of a recent U.S. Supreme Court ruling about criminal jurisdiction in Indian Country. (AP PhotoSue Ogrocki, File)

Dozens of other inmates convicted in non-death penalty cases also are seeking to have their convictions tossed, which is expected to result in a dramatic increase in the workload of federal prosecutors.

Although Bosse is not a tribal citizen, the court determined that Griffin and her children were Native Americans and that the crime occurred on land inside the Chickasaw Nation’s historic reservation. 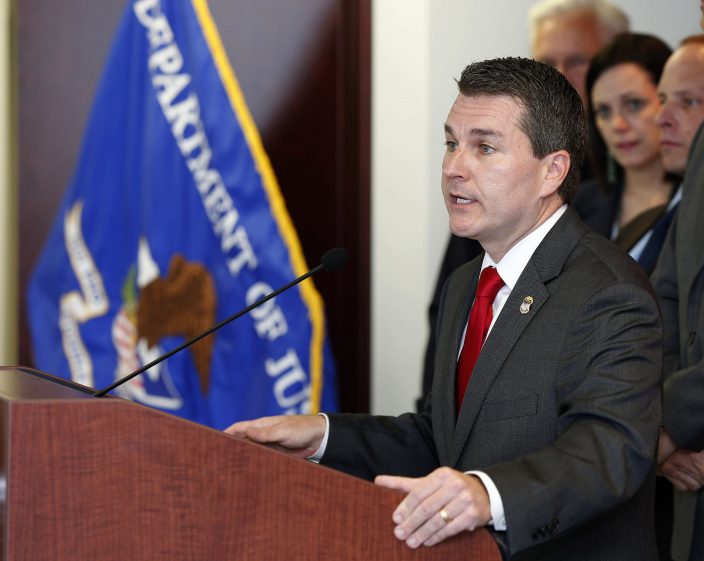 FILE - In this Tuesday, May 14, 2019 file photo, US Attorney Trent Shores speaks in Tulsa, Okla. As many as ten death row inmates in Oklahoma, more than one-fifth of the state's prisoners condemned to die, could escape the death penalty because of a recent U.S. Supreme Court ruling about criminal jurisdiction in Indian Country. (Stephen PingryTulsa World via AP)

“He’s benefiting from the people he killed,” Mashburn said. “It would be a travesty of justice if he got anything less than death.”

Mashburn said another trial would also revictimize Griffin's family, who were pleased with the outcome of the state trial.

Stephen Greetham, an attorney for the Chickasaw Nation, said Griffin’s family has reached out to the tribe with concerns that Bosse could escape his death sentence. But he says the tribe has no say in that case because Bosse is not American Indian.

“He’s not subject to our jurisdiction, so it’s entirely at the discretion of the federal prosecutor,” Greetham said.

The cases of Bosse and nine other death row inmates are being reexamined in district court to determine if the defendant or victims are enrolled members of a federally recognized tribe and if the crime occurred on a tribal reservation, according to the attorney general's office. If those conditions are met, it's likely the Oklahoma Court of Criminal Appeals will toss the convictions and force the cases to be retried in federal court where obtaining a death sentence is much more difficult.

Although federal prosecutors have the authority to pursue the death penalty under certain circumstances, if the killing is determined to have occurred on tribal lands, the tribal nation must also agree to allow the death penalty. While some Oklahoma-based tribes have indicated they're considering that option, only one tribe — the Sac & Fox Nation of Oklahoma — has explicitly authorized the death penalty in federal cases.

“The Sac & Fox Nation has always been a law-and-order tribe," said Carter Truman, an American Indian law expert and former prosecutor with the Sac & Fox Nation. “Our position was, if one of the most serious federal crimes was committed and you had a dangerous individual defendant accused of committing that crime, the death penalty should be an option."

But none of the crimes committed by the death row inmates seeking to have their convictions thrown out took place on Sac & Fox land. U.S. Attorney Trent Shores said having to retry these cases, particularly some that are decades old, could pose unique challenges because of fading witness memories or stale evidence.

“In theory, a blueprint is there for how to present this case and how to successfully convict this individual, but it’s not without inherent problems because of the time that has passed since the original crime," Shores said.

Maria Kolar, an Oklahoma City University professor with expertise in capital punishment as both a prosecutor and defense attorney, agreed retrying cases in federal court will be a challenge for federal prosecutors.

“I think it’s going to be a tall order for a lot of these cases, and the older the case, the bigger the challenge," Kolar said. “They’ll get into issues like witness availability, witness memory."