Sabres starting goalie Linus Ullmark will miss at least the next month with a lower-body injury, leaving Buffalo with one established netminder.

Veteran backup Carter Hutton will take over and start both games of Buffalo’s weekend series against the Flyers, with minor league callup Jonas Johansson serving as backup. 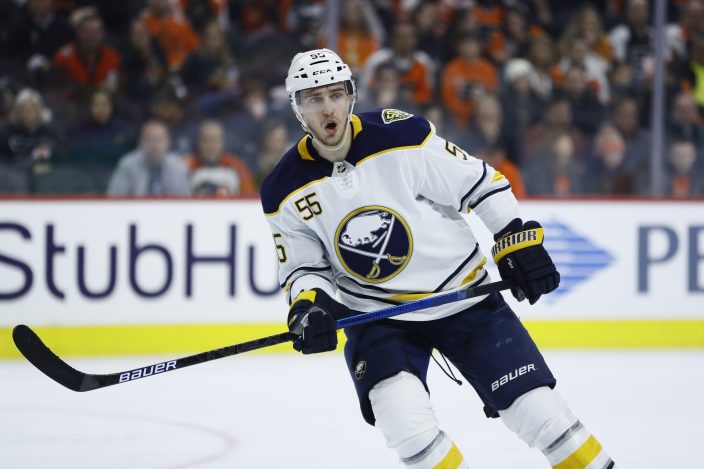 FILE - Buffalo Sabres' Rasmus Ristolainen plays during an NHL hockey game against the Philadelphia Flyers in Philadelphis, in this Saturday, March 7, 2020, file photo. Ristolainen is putting behind the frightening two-week bout he had in dealing with COVID-19 by focusing his energy on getting back into game shape. "The way I think about it, it's just a bump in the road, and it's going to make me tougher and better," Ristolainen said during a video conference call Thursday, Feb. 25, 2021, in his first comments since sharing his experience with the Finnish newspaper Ilta-Sanomat last week. (AP PhotoMatt Slocum, File)

High-priced forward Jeff Skinner, however, is set to return after being a healthy scratch the past three games. Defenseman Rasmus Ristolainen will play 3 1/2 weeks after testing positive for COVID-19 and spent two weeks in the NHL’s coronavirus protocol.

Forward Tobias Rieder will return after missing two games with an upper-body injury.

Krueger wouldn’t reveal details of Ullmark’s injury in calling it “a huge loss.”

Ullmark was shaken six minutes into a 4-3 overtime loss to New Jersey Devils on Thursday. He continued playing and stopped all 15 shots in the first period and did not return for the second period.

Eichel was a late scratch after participating in pregame warmups on Thursday.

Skinner’s return comes amid questions of whether he and Krueger see eye to eye while the 11th-year player and seven-time 20-goal-scorer is in the midst of a slump.

In the second season of an eight-year, $72 million contract, Skinner has one assist in 14 games this season, and not scored in 18 games dating to last season.

“Hopefully, this proves to be a good little regroup to launch and excellent rest of the season for Jeff,” Krueger said.

Ristolainen had a severe bout with COVID-19 in which he experienced chest pains and fatigue. He will bolster a blue-line group that lost Jake McCabe (right knee) and Will Borgen (broken right forearm) this past week.