Manchester City keeps on winning in its surge to the title. Brighton keeps on finding creative ways to lose in its plunge toward the relegation zone.

The English Premier League followed a familiar script on Saturday, complete with its latest episode of VAR chaos.

With a scrappy 2-1 victory over West Ham, City extended its winning run to 20 games in all competitions and established a 13-point lead that seems destined to end in the club’s fifth top-flight title in 10 years. 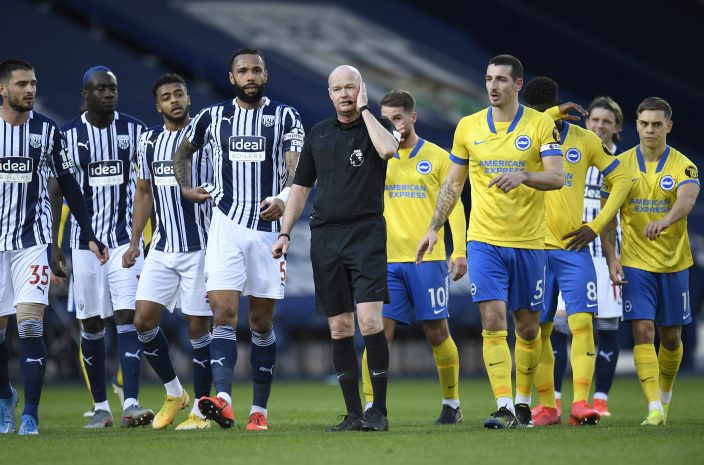 The fact that City’s goals came from its two center backs — Ruben Dias and John Stones — highlighted the difficulty the leaders had at Etihad Stadium against a fourth-placed West Ham side showing its unlikely bid for Champions League qualification is no fluke.

“After 15 minutes, we said, ‘OK, today we are not going to paint something beautiful. Today is the day just to take the three points,’” said City manager Pep Guardiola, whose team was playing in the Champions League in Budapest less than 72 hours earlier.

That’s what happened — as with every game City has played since the middle of December. Dias headed in a wonderful cross from Kevin De Bruyne in the 30th minute for his first goal for the club, only for Michail Antonio to equalize just before halftime for the first goal City has conceded at home in 2½ months. 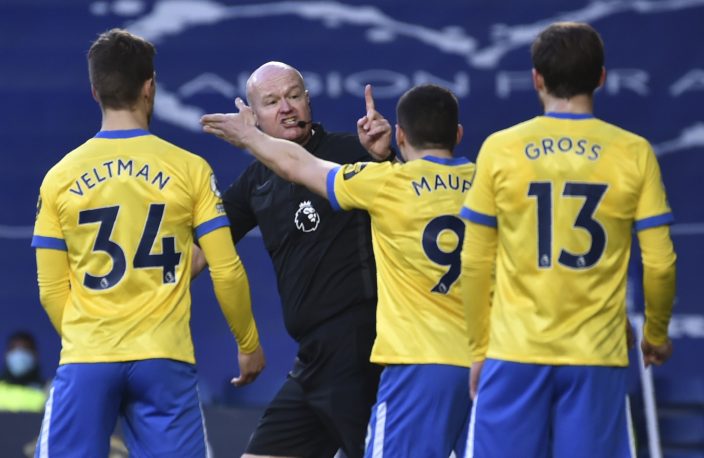 Stones grabbed the winner by sweeping in a finish from Riyad Mahrez’s pass.

“Some days it doesn’t come off for the forwards, and today me and Ruben chipped in,” Stones said. “That’s part of us being such a good team and the collective. In big games or important games, everyone chips in, maybe sometimes the person you don’t expect.”

Manchester United and Leicester are tied on points as City’s nearest rivals, and both play on Sunday. 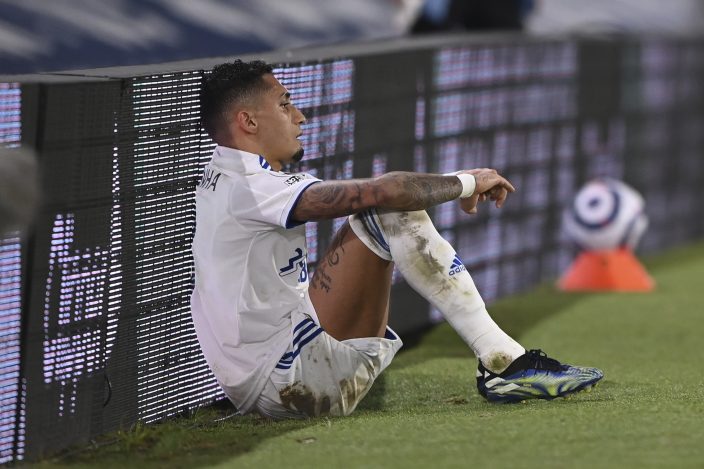 It was a significant day at the other end of the standings, as well, with Brighton somehow contriving to lose at West Bromwich Albion 1-0 in the most mystifying way possible.

Brighton probably thought losing to Crystal Palace 2-1 on Monday after allowing just two touches in its own box would end up being its most unfortunate of defeats this season. It was wrong.

Five days later, Graham Potter’s side missed two penalties and also saw a goal from a free kick ruled out because of the incompetence of referee Lee Mason amid farcical scenes at The Hawthorns.

Lewis Dunk curled in a quickly taken free kick from the edge of the area a split second after Mason blew his whistle for play to restart. However, Mason blew for a second time just as the ball was crossing the line, having seen that West Brom goalkeeper Sam Johnstone was still lining up his defensive wall and wasn’t ready for the free kick.

Mason initially awarded no goal, then reversed his decision. As chaos ensued — with players from both teams surrounding the official -- the increasingly beleaguered Mason was advised by the VAR to view the incident on the pitchside monitor and, after a lengthy delay, returned to the field to again disallow the goal.

“It’s embarrassing, it’s a horrendous decision,” Dunk said. “I said to the ref, ‘Can I take it?’ He blew his whistle and I took it.

“I don’t think he knew what he was doing. He gave the goal, why did he give it? I don’t know why VAR was getting involved. He said ‘Goal’ … you can look on the video if you want.”

Asked if Mason lost control of the game Dunk said: “Yeah, he did. Fact.”

As it was, Kyle Bartley’s goal earned West Brom only its third win of the season and moved the next-to-last team to within eight points of safety.

At the end of a miserable week, Brighton was just four points above the relegation zone having played one game more than third-to-last Fulham.

Villa moved to within four points of the European qualification positions by beating Leeds 1-0 thanks to Anwar El Ghazi’s early goal.

El Ghazi was left unmarked to turn home the only goal from close range in the fifth minute and dogged defending saw Villa avenge its 3-0 home loss to Leeds in October.