Gauzere allowed disputed first-half tries by Wales backs Josh Adams and Liam Williams as the home side bolted ahead 17-6. England rallied to tie the score on 24 with momentum and 18 minutes to go, but couldn’t handle Wales returning the pressure. The clinical Welsh prevailed 40-24 with a bonus four tries and Triple Crown, and tallied its most ever points against England.

Jones was at pains to say the Welsh were “worthy winners” but hinted their first-half tries were gifts from Gauzere. 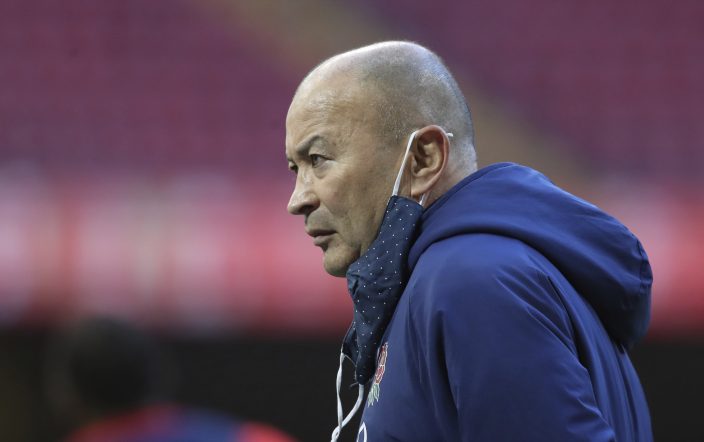 England's head coach Eddie Jones watches his players warm up ahead of the Six Nations rugby union match between Wales and England at the Millennium stadium in Cardiff, Wales, Saturday, Feb. 27, 2021. (David DaviesPool Via AP)

Adams’ try stemmed from a penalty against Farrell. Gauzere told Farrell to warn his teammates because they were infringing too much. As the team gathered around Farrell, Gauzere called time off. About 14 seconds later, Gauzere called time on. Wales flyhalf Dan Biggar, standing with ball in hand on the penalty spot, instantly crosskicked for Adams to catch and score with England too late to cover. Farrell told Gauzere they weren't given time to reset the defense, and the ref dismissed him.

In the Williams try, teammate Louis Rees-Zammit fumbled an attempted pick-up and the ball fell backwards off his hand and leg, but it appeared to be knocked on. The TMO was OK with it, though.

Asked if the decisions changed the game, Jones said: "Well, they get points maybe they don't deserve and we have to fight to get back into the game.

"We take full responsibility and don't blame the referee. But sometimes there are circumstances that happen that are difficult to handle and we weren't good enough to handle them.

"We've got to be able to adapt to those emotional disruptions and officiating disruptions.”

Farrell, though fuming, also didn't want to go after Gauzere, saying "There is no point in talking about it now. We got our way back into it in that second half and didn't quite finish it off. There's plenty for us to do better.”

Discipline would be top of the list. England gave away 14 penalties, four after 24-all. Callum Sheedy slotted three between the uprights and put Wales out of reach.

"We gave away penalties we shouldn't have, it was just from the effort and sometimes you get in situations where emotionally you struggle because of the circumstances and you try too hard,” Jones said.

"Whenever you get beaten and bettered by a penalty, then discipline is an issue. But there were bigger issues in the game than that.”