The Cavaliers earned their first road win since Jan. 7 at Memphis and No. 4 on the season. They got one against a Sixers team that built the best record in the Eastern Conference (22-12) on the strength of a 14-2 mark at home. 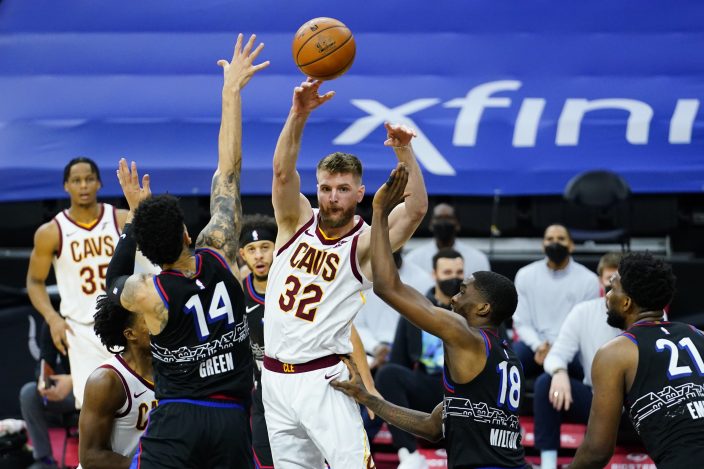 Isaac Okoro scored the first three points of OT and had 15 when he fouled out. The Cavs led by three and turned the ball over only for Ben Simmons to get whistled for an offensive foul. Garland hit a floater for a five-point lead and the 11-point underdog Cavaliers were on their way to their third straight win.

Joel Embiid had 42 points and 13 rebounds for Philadelphia. Simmons scored 21.

Sexton hit a 3 late in regulation that put the Cavs ahead 92-90, but Embiid answered with a tying dunk. The score went back-and-forth all quarter and the Cavs had a chance to win late. Sexton missed a long 3 coming out of a timeout and Matisse Thybulle grabbed the defensive rebound. Embiid missed a step-back 15-footer with one second left and the game went into OT tied 92-all. 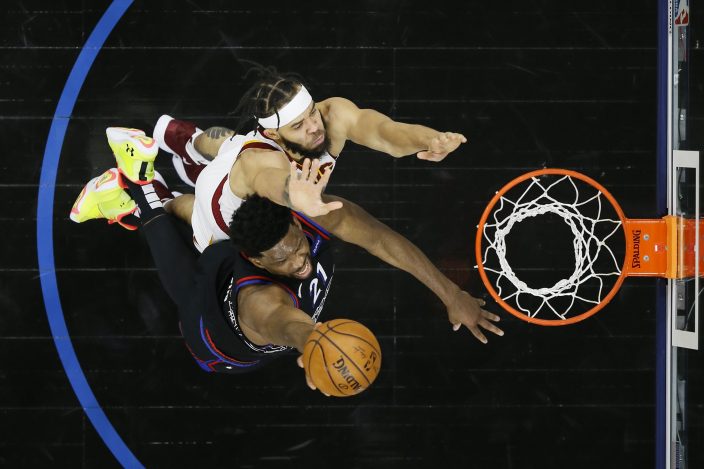 Philadelphia 76ers' Joel Embiid, bottom, goes up for a shot against Cleveland Cavaliers' JaVale McGee during the first half of an NBA basketball game, Saturday, Feb. 27, 2021, in Philadelphia. (AP PhotoMatt Slocum)

Embiid, who seems good for one injury scare a game, sure enough came up limping late in the first quarter. He stayed in the game after a timeout and promptly passed out of a double team to Danny Green for a 3.

Embiid’s ability to draw fouls -- he’s been accused of flopping -- at an elite level continued against the Cavs. Embiid let out an “ahhh!” as he tangled with JaVale McGee and went to the line. McGee was whistled for three fouls in 1 minute that led to four made free throws by Embiid, and Jarrett Allen also had three fouls by halftime. Embiid was 11 of 12 from the line in the half; the Cavs just 10 of 13.

Sixers coach Doc Rivers yelled, “Wake up! Let’s go!” with the Sixers down 39-30. The Sixers needed time to snap out of their slumber. 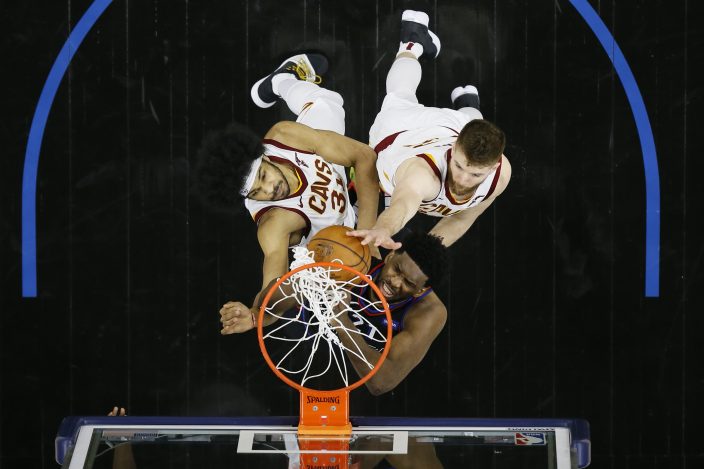 Philadelphia 76ers' Joel Embiid, center, goes up for a rebound against Cleveland Cavaliers' Jarrett Allen, left, and Dean Wade during the first half of an NBA basketball game, Saturday, Feb. 27, 2021, in Philadelphia. (AP PhotoMatt Slocum)

Embiid and Simmons carried the Sixers in the first half and combined to score 33 of their 47 points. The other three starters scored just seven points and the Cavs led 56-47 at the break.

The Cavaliers ran and ran after Sixers’ misses and scored 17 fast-break points in the half.

The Sixers shook off a 13-point hole and got rolling in the third, in large part because Embiid and Simmons had help from the bench. Mike Scott hit a 3 that pulled them within one. Shake Milton hit the floater that tied it at 65.

Cleveland Cavaliers' Collin Sexton reacts after a basket during the first half of an NBA basketball game against the Philadelphia 76ers, Saturday, Feb. 27, 2021, in Philadelphia. (AP PhotoMatt Slocum)

Cavaliers: Andre Drummond again sat out for “personal reasons” as the Cavs look into a trade. .... Matthew Dellavedova, still out because of the effects of a concussion, made the trip. He also recently had his appendix removed. 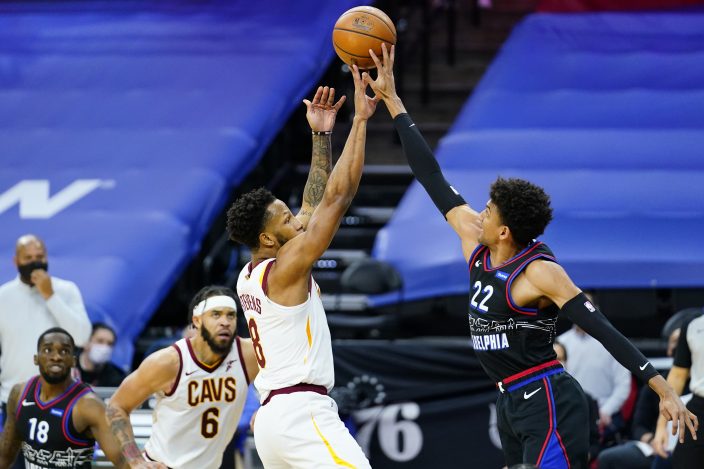 Si Woo Kim breaks putter during second round of the Mas ...