Kris Letang got his second goal of the game 4:34 into overtime, giving the Pittsburgh Penguins a 4-3 win over the New York Islanders on Saturday night.

Sidney Crosby had a goal and an assist for Pittsburgh, which won for the sixth time in eight games. Jared McCann also scored and Tristan Jarry made 24 saves as the Penguins beat the Islanders for the fourth time in five meetings this season.

Brock Nelson had a goal and an assist, and Mathew Barzal and Josh Bailey also scored for the Islanders. Semyon Varlamov, starting for the fifth straight game, stopped 27 shots. 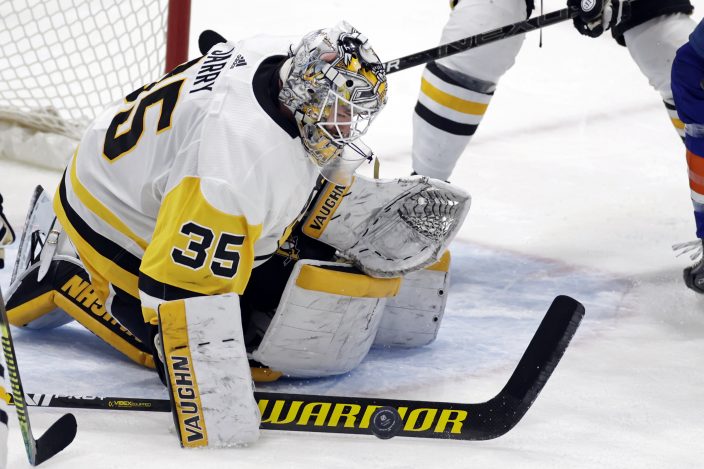 Pittsburgh Penguins goaltender Tristan Jarry makes a save against the New York Islanders during the second period of an NHL hockey game Saturday, Feb. 27, 2021, in Uniondale, N.Y. (AP PhotoAdam Hunger)

New York fell to 6-0-2 at Nassau Coliseum, remaining the NHL's only team without a regulation loss at home. The Islanders went 7-2-2 in February — with all the losses coming against the Penguins.

The teams conclude their two-game weekend series back at the Nassau Coliseum on Sunday.

Late in the extra period, Letang brought the puck up the ice and fired a shot through New York forward Jean-Gabriel Pageau's legs and into the top left corner. It was Letang's fourth of the season, all coming against the Islanders. 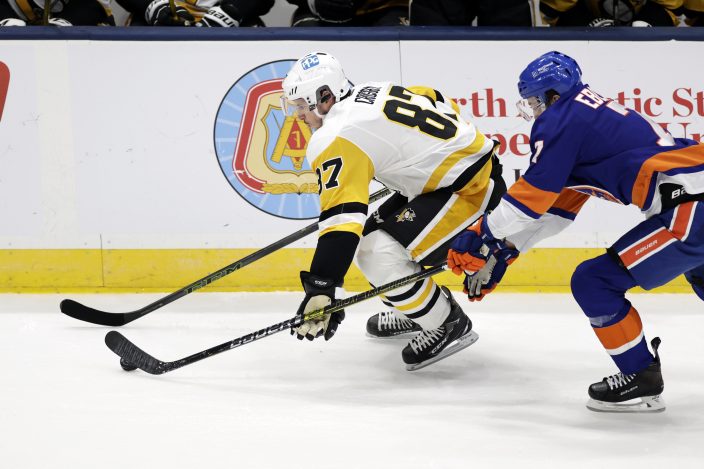 McCann tied it at 3 just 18 seconds into the third. On a 2-on-1, McCann got a pass from Evgeni Malkin in the middle and beat Varlamov for his third.

Barzal made it 2-0 at 1:34 of the second. He skated across the ice to the right side and fired a shot that deflected up off an extended John Marino's stick and past Jarry.

With the Penguins on their third power play of the game, Varlamov fell back down after catching his skate on the ice as Crosby got a pass from Letang and fired a shot from the top of the left circle into the top right corner at 2:17. 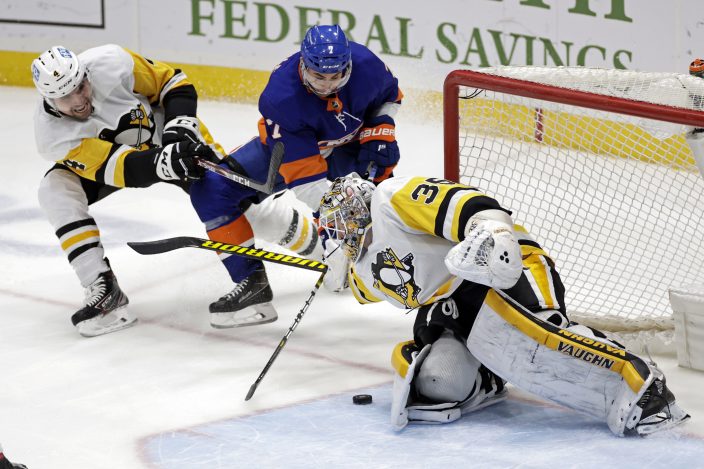 Letang tied it 26 seconds later, getting a pass from Kasperi Kapanen from behind the net and firing a slap shot past Varlamov.

Bailey regained New York's lead, scoring from in front off a pass from Anthony Beauvillier with 5:09 left. It was Bailey's second goal of the season.

Jarry and Varlamov each made eight saves in the first period, with Varlamov stopping four attempts on Pittsburgh’s two power plays. 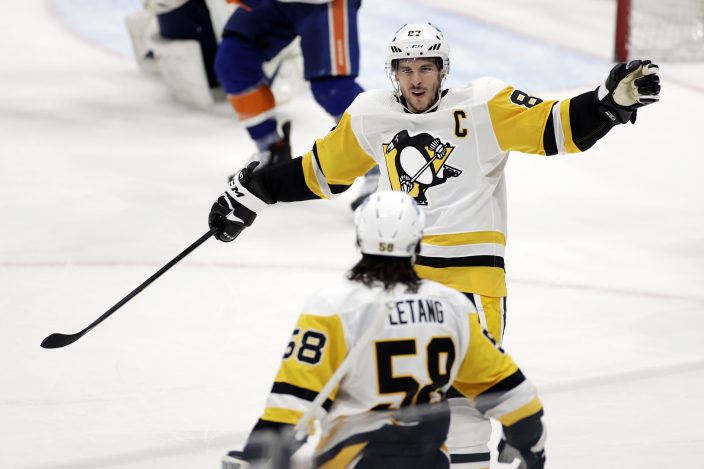 The Islanders got on the scoreboard on their only power play of the game late in the opening period. Oliver Wahlstrom sent a pass from the left circle to Nelson on the right doorstep, and Nelson deflected the puck up over Jarry for his sixth with 1:20 left.

Islanders forward Cal Clutterbuck was a late scratch. He did not play after the first period against Boston on Thursday night due to an undisclosed injury. Michael Dal Colle was activated off IR and began the game on the third line with Pageau and Wahlstrom. Leo Komarov dropped to the fourth line in Clutterbuck's place. 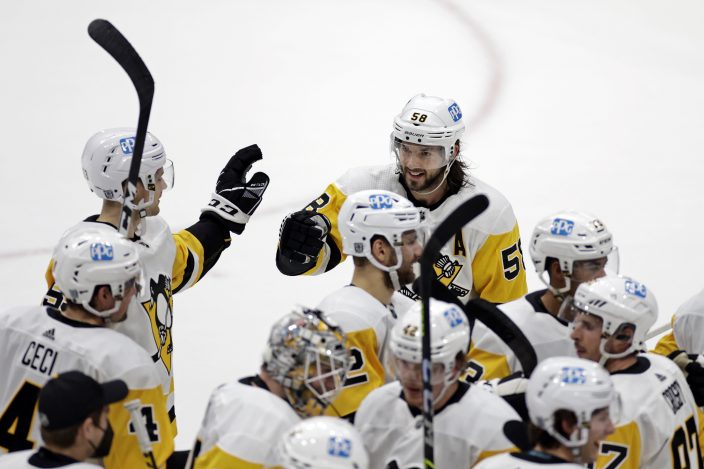 McCann was activated off IR after missing Pittsburgh's last seven games with a lower-body injury sustained against the Islanders on Feb. 6.

Islanders defenseman Nick Leddy had an assist on Nelson's first-period goal, giving him eight assists in his last nine nine games. Nelson has four goals in his last seven games. Lee has three assists and eight points over the last eight games. 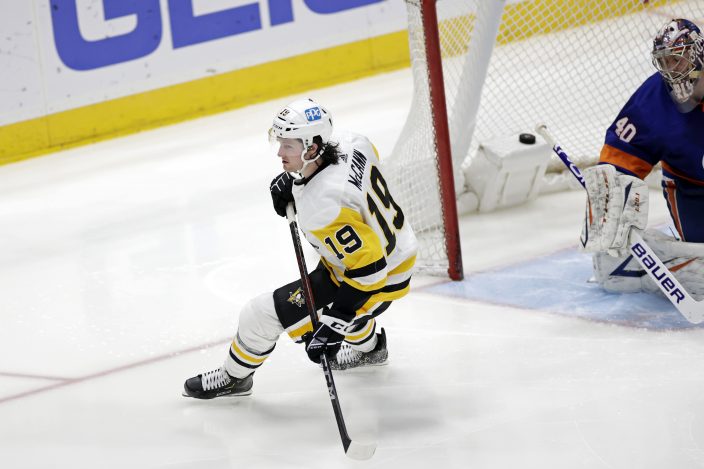 Crosby has 38 goals and 120 points in 72 career games against the Islanders for the highest scoring total of any active NHL player against one team.

The Penguins went 1 for 5 and are 4 for 21 on the power play over their last seven games following a season-high seven-game drought without a goal with the man advantage (0 for 20). 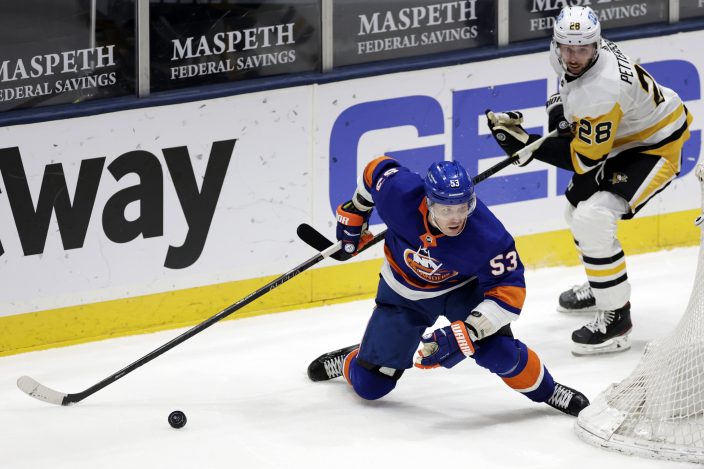 The Islanders are 8 for 23 on power play over last 12 games.

Kapanen's assist on Letang's second-period goal gave him 100 points for his career.