Julius Randle scored 28 points and grabbed 10 rebounds to lift the New York Knicks back to .500 with a 110-107 win over the Indiana Pacers on Saturday night. 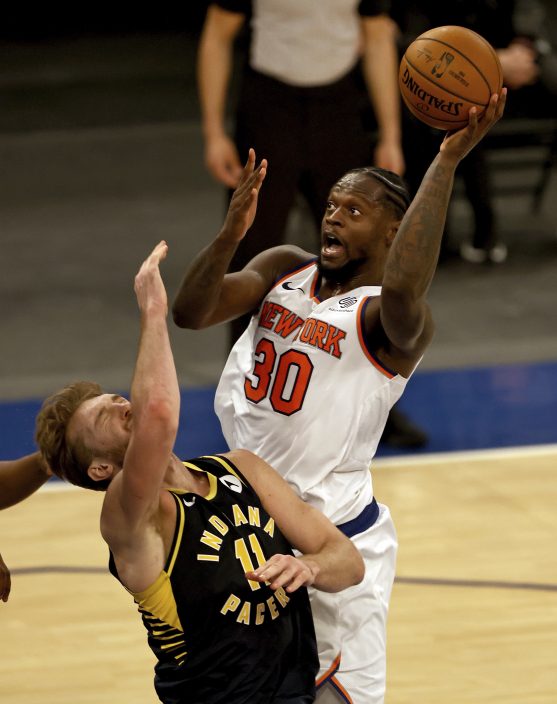 New York Knicks' Julius Randle (30) is called for an offensive foul as he collides with Indiana Pacers' Domantas Sabonis (11) in the fourth quarter of an NBA basketball game Saturday, Feb. 27, 2021, in New York. (ElsaPool Photo via AP)

Whereas the Knicks appear to be gaining positive traction, the Pacers were frustrated by their inability to finish out a game.

Doug McDermott had 20 points for Indiana, which fell to 15-17 with its third straight loss. T.J. McConnell finished with 17, Domantas Sabonis had 15 points, seven rebounds, and nine assists, Justin Holiday had 13 points and Myles Turner 11. 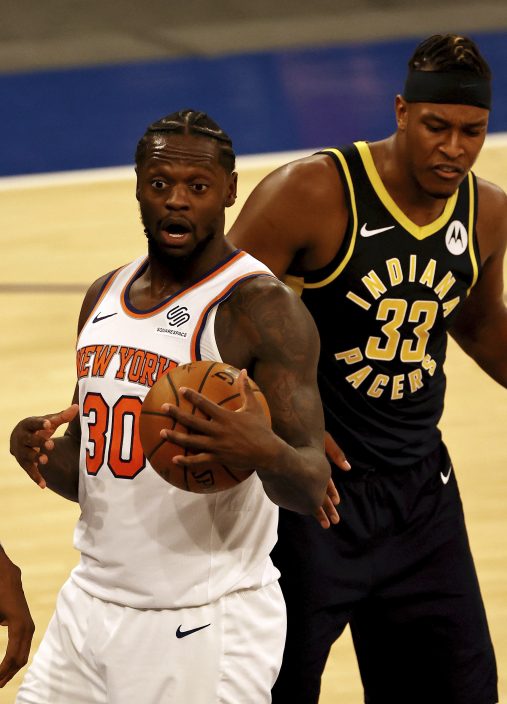 New York Knicks' Julius Randle (30) reacts after he was called for an offensive foul in the fourth quarter as Indiana Pacers' Myles Turner (33) looks on during an NBA basketball game Saturday, Feb. 27, 2021, in New York. (ElsaPool Photo via AP)

The third and final regular-season meeting between the Eastern Conference teams did not have the stakes that their iconic playoff series in the mid-1990s had, but that did not stop the franchises’ antecedents from playing a hard-nosed, possession-by-possession game that seemed familiar.

Indiana appeared to be the sharper team for much of the first half after coming off a nationally televised 118-112 loss in Boston on Friday night. But New York, which hadn't played since routing Sacramento on Thursday night, took a 54-52 lead into halftime thanks to a 17-3 run over the final 4:38, capped by Rose’s buzzer-beating pull-up 3.

“We couldn't stop a nosebleed on that run,” McConnell said. “We've got to buckle down and grow up and get some stops.” 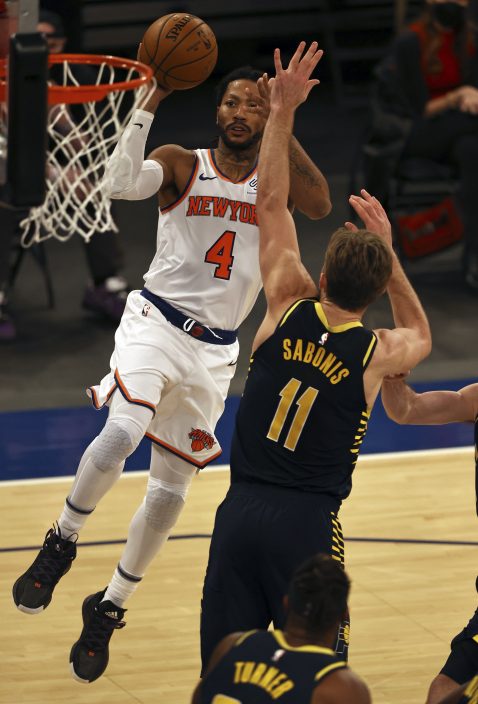 During the spurt, New York forced Indiana into four missed shots and five turnovers prompting the 1,981 at Madison Square Garden to chant “Dee-fence!”

“We kind of imposed our will and our physicality on the game,” Randle said. “That's how we kind of got back in the game.”

New York maintained its advantage for most of the third quarter, and began the fourth with a 81-78 lead. But Indiana outscored the Knicks 18-12 over the first seven minutes of the final quarter and held a 96-93 advantage when Sabonis drew a charge from Randle. On the ensuing possession, Turner scored on a layup to push the lead to five. 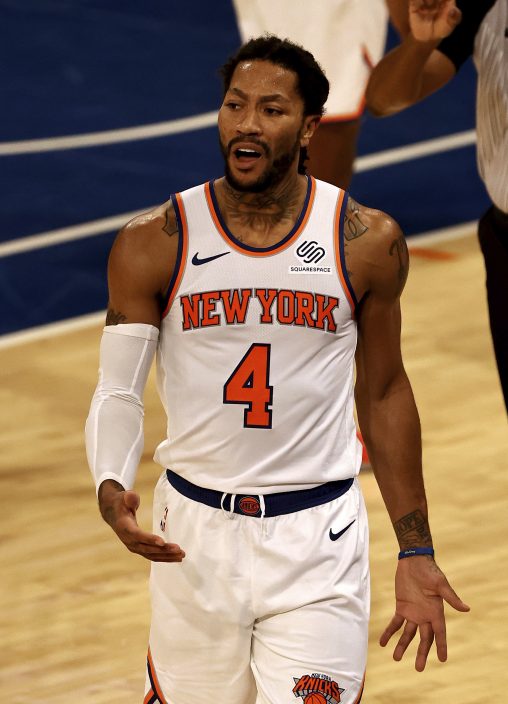 New York Knicks' Derrick Rose reacts after he was called for a foul in the third quarter against the Indiana Pacers during an NBA basketball game Saturday, Feb. 27, 2021, in New York. (ElsaPool Photo via AP)

It didn’t last as Barrett drilled a 3 and converted a three-point play to put the Knicks ahead 99-98. Following a timeout, Randle knocked down a 3 and Barrett converted a layup to extend the Knicks’ lead to 104-98. Indiana responded with a layup by McConnell and a 3 by Edmond Sumner to close within one at 104-103. 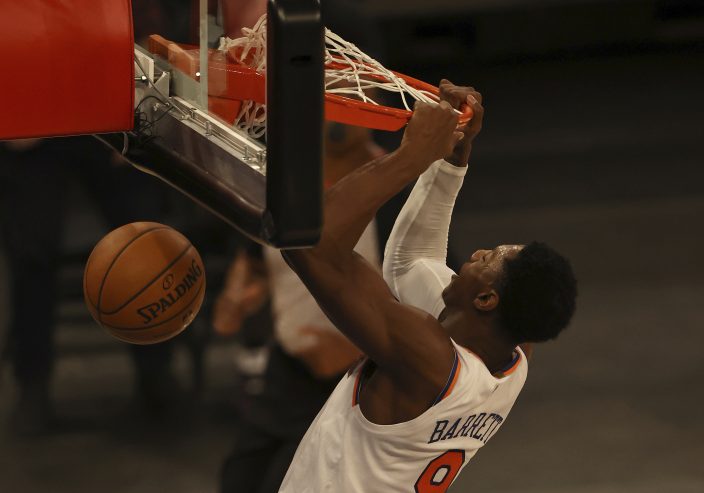 New York Knicks' RJ Barrett dunks in the second half against the Indiana Pacers during an NBA basketball game Saturday, Feb. 27, 2021, in New York. (ElsaPool Photo via AP)

Pacers: A little more than a half-hour before the game was scheduled to start, Indiana announced guard Malcolm Brogdon would not play due to a sore right knee. He was replaced in the starting lineup by McConnell. Brogdon, who had played in every game this season before Saturday night’s loss, is averaging 21.3 points, 4.8 rebounds, and 6.4 assists in 35.9 minutes per game.

Knicks: Despite Randle’s suggestion after Thursday’s win over Sacramento that New York’s defense had slipped in its last two games, the Knicks entered Saturday night leading the league in fewest points per game with an average of 104.4. “You’re going to have slippage in different areas,” coach Tom Thibodeau said. “You’re not going to be able to work on everything every day, so you’re going to have to prioritize on the things you have to focus in on, and try to correct those things but it’s never-ending.” 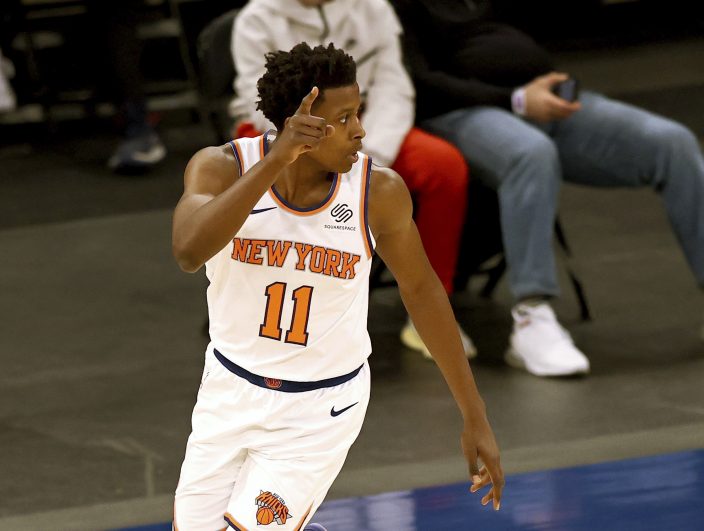 Pacers: At Philadelphia on Monday night.

Knicks: At Detroit on Sunday night.