When drained of glamour, what’s left of the Golden Globes?

That’s one of the biggest questions heading into the 78th annual awards on Sunday night. The show, postponed two months from its usual early-January perch, will have little of what makes the Globes one of the frothiest and glitziest events of the year. Due to the pandemic, there will be no parade of stars down the red carpet outside the Beverly Hilton in Beverly Hills, California. Its hosts, Tina Fey and Amy Poehler, will be on different sides of the country.

More than any award show, the Globes revel in being an intimate banquet of stars. When the show begins at 8 p.m. EST on NBC, with Poehler in Beverly Hills and Fey in New York’s Rainbow Room, the circumstances will test the Globes telecast like never before. 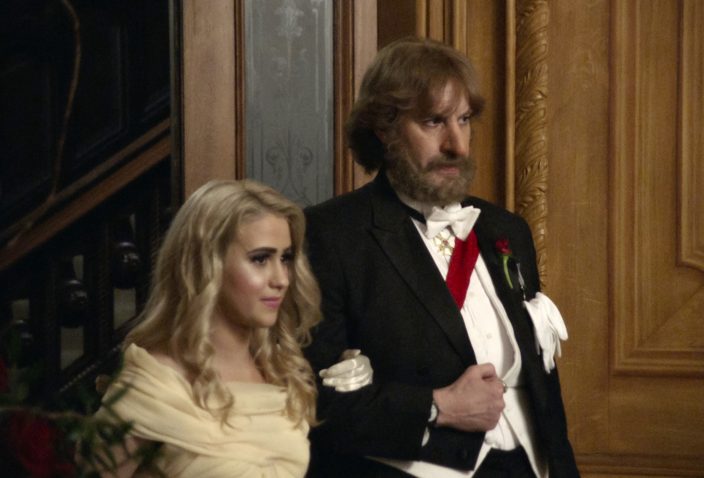 This image released by Amazon Studios shows Maria Bakalova, left, and Sacha Baron Cohen in a scene from "Borat Subsequent Moviefilm." The film was nominated for a Golden Globe for best musicalcomedy.(Amazon Studios via AP)

Presenters will include Awkwafina, Joaquin Phoenix, Kristen Wiig, Tiffany Haddish, Margot Robbie and Angela Bassett. At least some of them will be present at one of the two locations. Pre-show coverage is still going forward on E! beginning at 4 p.m. EST and on NBC beginning at 7 p.m. EST. The telecast will be streamed on NBC’s website with a television-provider log-in, as well as on the Roku Channel, Hulu with Live TV, YouTube TV, AT&T TV, Sling TV and Fubo TV.

But pandemic improvising is only part of the damage control the Hollywood Foreign Press Association, which puts on the Globes, finds itself dealing with this year. A pair of extensive reports by The Los Angeles Times and The New York Times in the week leading up to the awards renewed scrutiny on the press association and its 87 voting members.

While the HFPA has long been known as an organization with members of questionable qualification — the majority of its members don’t write for well-known publications — and are known for being swayed by high-priced junkets, the reports again forced the HFPA to defend itself.

Among the most damning details was the revelation that there are no Black voting members in the group, something that only reinforced criticism that the press association — which host Ricky Gervais last year called “very, very racist” in his opening monologue — is in need of overhauling. This year, none of the most acclaimed Black-led films — “Ma Rainey’s Black Bottom,” “One Night in Miami,” “Judas and the Black Messiah,” “Da 5 Bloods” — were nominated for the Globes’ best picture award.

In a statement, the HFPA said it would make “an action plan” to change. “We understand that we need to bring in Black members, as well as members from other underrepresented backgrounds,” the group said.

For some, none of the revelations were surprising. Ava DuVernay tweeted in response to the LA Times article: “Reveals? As in, people are acting like this isn’t already widely known? For YEARS?”

Two-time nominee Sterling K. Brown, who's presenting Sunday, said in an Instagram post that “having a multitude of Black presenters does not absolve you of your lack of diversity.”

“87 people wield a tremendous amount of power,” said Brown. “For any governing body of a current Hollywood award show to have such a lack of voting representation illustrates a level of irresponsibility that should not be ignored.”

Yet the Globes have persisted because of their popularity (the show ranks as the third most-watched award show, after the Oscars and Grammys), their profitability (NBC paid $60 million for broadcast rights in 2018) and because they serve as important marketing material for contending films and Oscar hopefuls. That may be especially true this year when the pandemic has upset the normal rhythms of buzz in a virtual awards season lacking the usual frenzy.

The Globes are happening on the original date of the Academy Awards, which are instead to be held April 25.

Netflix comes in with a commanding 42 nominations, including a leading six nods for David Fincher’s “Mank” and “The Crown” also topping TV nominees with six nods. Aaron Sorkin’s “The Trial of the Chicago 7,” also from Netflix, is also a heavyweight with five nominations.

Chloe Zhao, the “Nomadland” filmmaker and Oscar frontrunner, is expected to become the first woman of Asian descent to win best director at the Globes and the first woman since Barbra Streisand won for “Yentl” in 1984.

Chadwick Boseman, nominated for best actor for his performance in the August Wilson adaptation “Ma Rainey’s Black Bottom,” could win a posthumous Golden Globe. Boseman is widely expected to be nominated for an Oscar.

And “Borat Subsequent Moviefilm” stands a good chance of being crowned best picture, comedy or musical. With many of the leading nominees in the drama category — among them “Mank,” “Nomadland,” “The Father,” “Promising Young Woman” and “The Trial of the Chicago 7” — Sacha Baron Cohen’s sequel could emerge a big winner. Cohen, who won a Globe for his performance in the first “Borat” film, is nominated for Borat and for his role in “The Trial of the Chicago 7.”

Jane Fonda, a seven-time Globe winner, will receive the Cecil B. DeMille Award for lifetime achievement. Norman Lear will be honored for his television career and accept an award named after Carol Burnett. 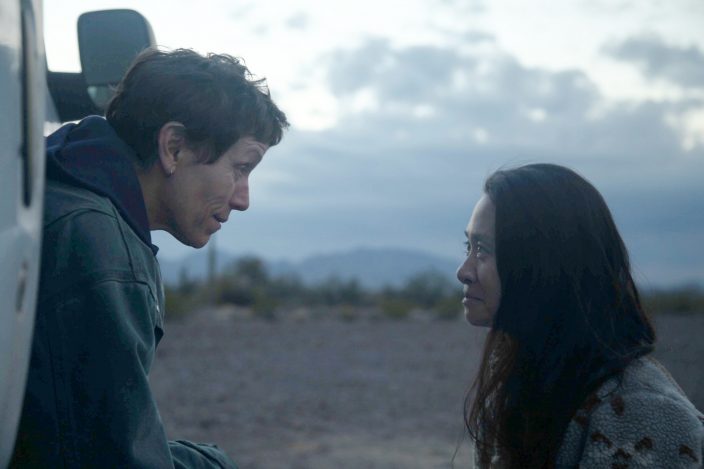 This image released by Searchlight Pictures shows Frances McDormand, left, and director Chloe Zhao on the set of "Nomadland." Zhao has made cinema of rugged authenticity, relying frequently on non-professional actors and moments of serendipity while filming. She is nominated for a Golden Globe for best director. (Searchlight Pictures via AP) 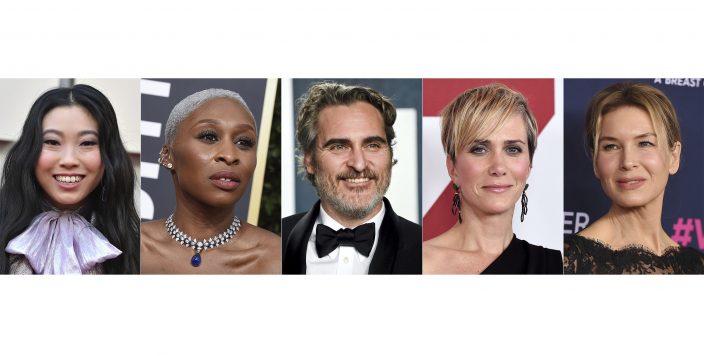