The Philippines is due to receive its first batch of COVID-19 vaccine Sunday, among the last in Southeast Asia to secure the critical doses despite having the second-highest number of coronavirus infections and deaths in the hard-hit region.

President Rodrigo Duterte and top Cabinet officials will welcome the arrival of 600,000 doses of China-donated vaccine in a ceremony at an air base in the capital that will underscore their relief after weeks of delays, officials said. Vaccinations initially for health workers are scheduled to start Monday.

Aside from the donated vaccine from Sinovac Biotech Ltd., the government has separately ordered 25 million doses from the China-based company. An initial 525,600 doses of COVID-19 vaccine from AstraZeneca were also scheduled to arrive Monday, presidential spokesperson Harry Roque said. 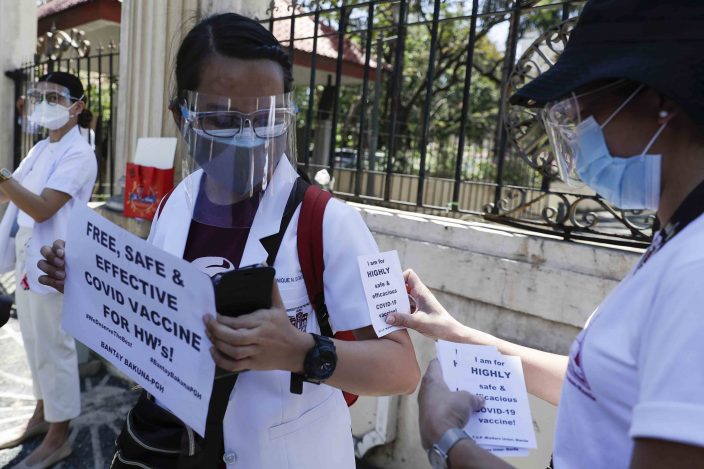 A health worker wearing a face mask and shield holds a slogan as they call on the government to give them a vaccine with the safest, highest efficacy and effectivity during a protest outside the Philippine General Hospital in Manila, Philippines on Friday, Feb. 26, 2021. The group is opposing a plan by the government to have health workers vaccinated with China's Sinovac which is expected to arrive this weekend. (AP PhotoAaron Favila)

The initial deliveries are a small fraction of at least 148 million doses the government has been negotiating to secure from Western and Asian companies to vaccinate about 70 million Filipinos for free in a massive campaign largely funded with foreign and domestic loans. The bulk of the vaccine shipments are expected to arrive later this year.

Resty Padilla, a spokesperson for a government panel dealing with the pandemic, said the vaccine could be a “game-changer” in a debilitating health crisis that has infected more than 574,000 people in the Philippines and killed at least 12,289 others. Lockdowns and quarantine restrictions have also set back Manila’s economy in one of the worst recessions in the region and sparked unemployment and hunger.

“Although we are still a long way from herd immunity, the arrival of the initial supply of vaccine provides hope that our road to normalcy has finally begun,” Padilla told The Associated Press. 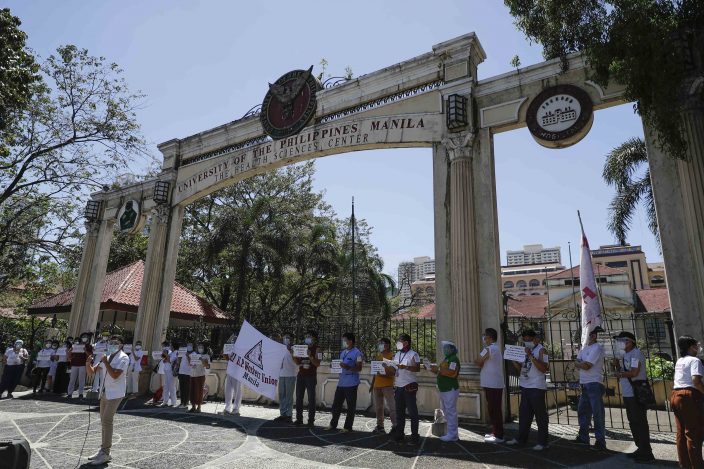 Health workers wearing face masks and face shields call on the government to give them a vaccine with the safest, highest efficacy and effectivity during a protest outside the Philippine General Hospital in Manila, Philippines on Friday, Feb. 26, 2021. The group is opposing a plan by the government to have health workers vaccinated with China's Sinovac which is expected to arrive this weekend. (AP PhotoAaron Favila)

Duterte’s administration has come under criticism for lagging behind most other Southeast Asian countries in securing the vaccines, including much smaller and poorer ones like Cambodia, Myanmar and Laos.

The tough-talking leader has said wealthy Western countries, especially where the vaccine originated, have cornered massive doses for their citizens, leaving poorer nations scrambling to get the rest. In a sign of desperation, Duterte said last December that he would proceed to abrogate a key security pact with the United States that allows large numbers of American troops to conduct war exercises in the Philippines if Washington could not provide at least 20 million doses of COVID-19 vaccine for his country.

“No vaccine, no stay here,” Duterte said then.

The Chinese vaccine delivery was delayed due to the absence of an emergency-use authorization from Manila’s Food and Drug Administration. Sinovac got the authorization last Monday. Western pharmaceutical companies also wanted the Philippine government to guarantee that it would take responsibility for lawsuits and demands for indemnity arising from possible adverse side effects from the vaccine, officials said.

Duterte signed a law last week giving pharmaceutical companies immunity from such liabilities for the emergency use by the public of their vaccine.