Looking beyond the $1.9 trillion COVID relief bill, President Joe Biden and lawmakers are laying the groundwork for another top legislative priority — a long-sought boost to the nation's roads, bridges and other infrastructure that could run into Republican resistance to a hefty price tag.

Biden and his team have begun discussions on the possible outlines of an infrastructure package with members of Congress, particularly mindful that Texas' recent struggles with power outages and water shortages after a brutal winter storm present an opportunity for agreement on sustained spending on infrastructure.

Gina McCarthy, Biden’s national climate adviser, told The Associated Press that the deadly winter storm in Texas should be a “wake-up call” for the need for energy systems and other infrastructure that are more reliable and resilient. 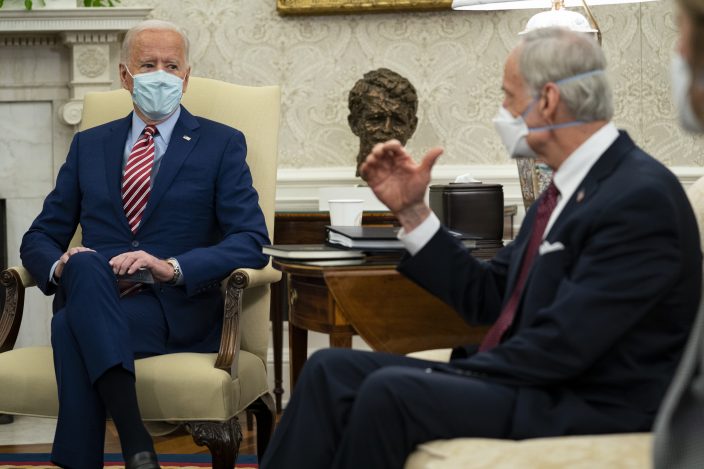 Sen. Tom Carper, D-Del., right, speaks to President Joe Biden during a meeting with lawmakers on investments in infrastructure, in the Oval Office of the White House, Thursday, Feb. 11, 2021, in Washington. (AP PhotoEvan Vucci)

“The infrastructure is not built to withstand these extreme weather conditions,” said Liz Sherwood-Randall, a homeland security aide to the president. “We know that we can’t just react to extreme weather events. We need to plan for them and prepare for them.”

A White House proposal could come out in March. 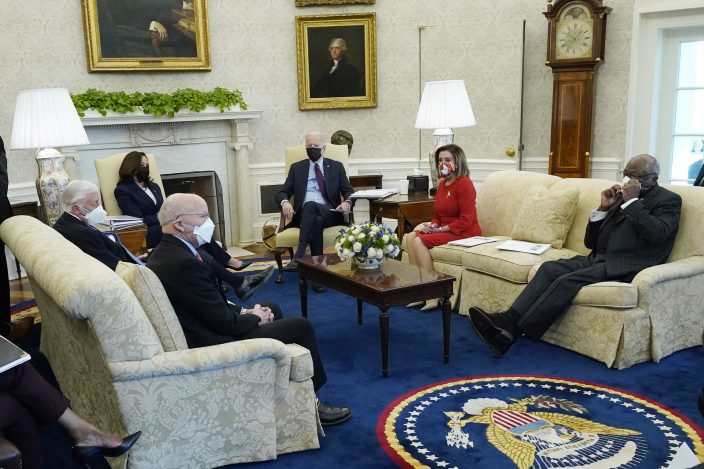 At a conference with state and local highway officials Thursday, he referred to the often-promised, never-achieved mega-initiative on roads, bridges and the like from the Trump administration.

“I know you are among those who are working and waiting most patiently, or maybe impatiently, for the moment when Infrastructure Week will no longer be a kind of Groundhog’s Day promise — but actually be something that delivers generational investments,” he said.

Much of America's infrastructure — roads, bridges, public drinking and water systems, dams, airports, mass transit systems and more — is in need of major restoration after years of underfunding, according to the American Society of Civil Engineers. In its 2017 Infrastructure Report Card, it gave the national infrastructure an overall grade of D+. 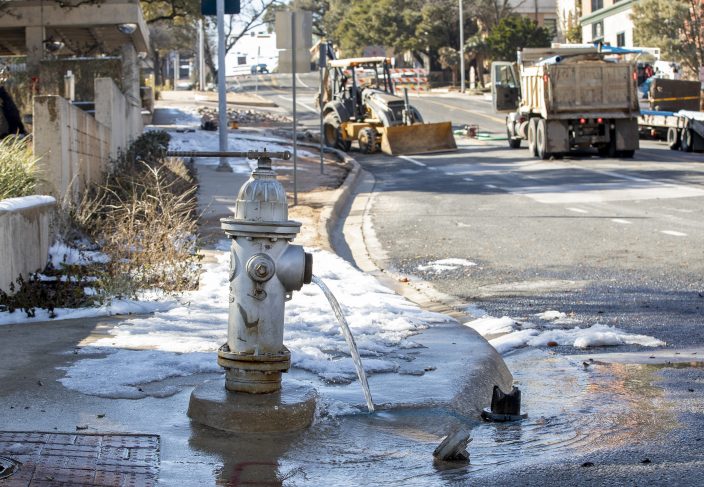 FILE - In this Feb. 21, 2021 file photo, water trickles from a fire hydrant while City of Austin Water Utility workers repair a broken water main in Austin, Texas, due to severe winter weather. The winter storm nightmare knocked out power to more than 4 million customers across the state. On Thursday, Feb. 25 managers of Texas' power grid are expected to receive a verbal lashing in the first public hearings about the crisis at the state Capitol. (Jay JannerAustin American-Statesman via AP, File)

Both chambers of Congress will use as starting points their unsuccessful efforts to get infrastructure bills through the last session.

Democrats passed a $1.5 trillion package in the House last year, but it went nowhere with the Trump administration and the Republican-led Senate. A Senate panel approved narrower bipartisan legislation in 2019 focused on reauthorizing federal transportation programs. It, too, flamed out as the U.S. turned its focus to elections and COVID-19.

Biden has talked bigger numbers, and some Democrats are now urging him to bypass Republicans in the closely divided Congress to address a broader range of priorities urged by interest groups. 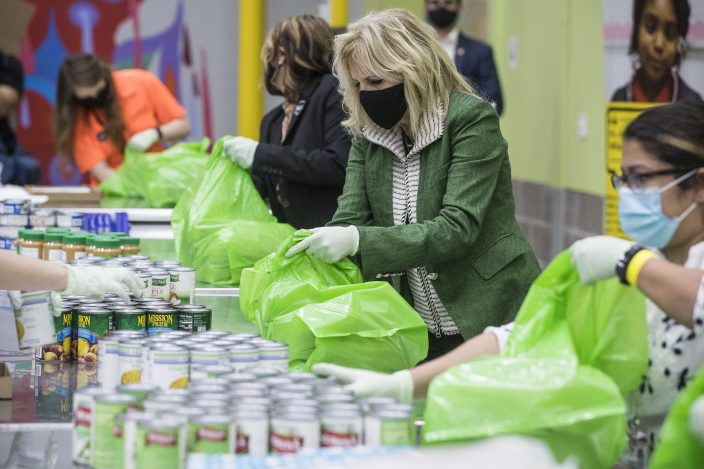 During the presidential campaign, Biden pledged to deploy $2 trillion on infrastructure and clean energy, but the White House has not ruled out an even higher price tag. McCarthy said Biden's upcoming plan will specifically aim at job creation, such as with investments to boost “workers that have been left behind” by closed coal mines or power plants, as well as communities located near polluting refineries and other hazards.

“He’s been a long fan of investing in infrastructure — long outdated — long overdue, I should say,” White House press secretary Jen Psaki said Thursday. “But he also wants to do more on caregiving, help our manufacturing sector, do more to strengthen access to affordable health care. So the size — the package — the components of it, the order, that has not yet been determined.”

Sen. Bernie Sanders, I-Vt., chairman of the Senate Budget Committee, recently told the White House that he's ready to use the budget maneuver known as reconciliation to pass a broad economic recovery package with only Democratic votes. That drew stern warnings from Republicans who have already closed ranks against Democrats’ COVID-19 relief bill. 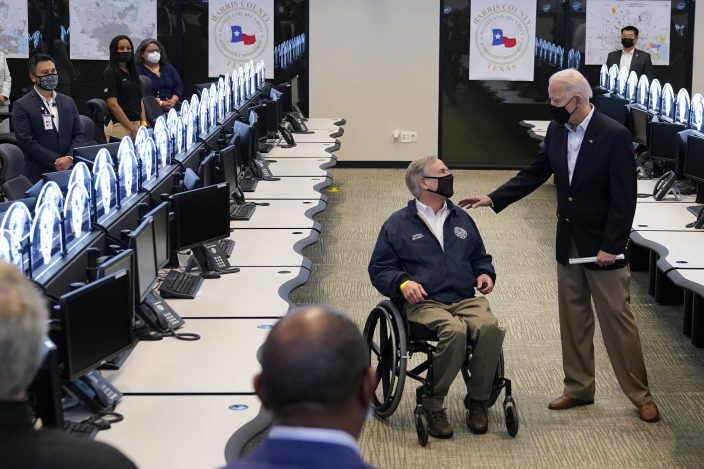 West Virginia Sen. Shelley Moore Capito, the top Republican on the Senate Environment and Public Works Committee, said there's bipartisan support for ambitious steps on infrastructure. But that "should not extend to a multitrillion-dollar package that is stocked full with other ideologically driven, one-size-fits-all policies that tie the hands of our states and our communities,” she said.

Capito will be helping to craft bipartisan legislation on the Senate side.

Rep. Peter DeFazio, chairman of the House Transportation and Infrastructure Committee, told the AP that he foresees a comprehensive House package that will go beyond roads, bridges and public transit.

He also expects it to have money for water systems, broadband and the power grid — addressing a weak infrastructure laid bare after the crippling blackouts in Texas.

He’s not ready to talk overall costs yet. DeFazio, D-Ore., said it will be up to the Biden administration and the House Ways and Means Committee to figure out how to pay for it.

DeFazio said General Motors' recently announced goal of going largely electric by 2035 demonstrates the need for massive spending on charging stations across the country. Biden campaigned on a plan to install 500,000 charging stations by the end of 2030.

Democratic Sen. Tom Carper of Delaware, the new chairman of the Senate Environment and Public Works Committee, said his goal is for his committee to pass an infrastructure bill by Memorial Day.

In the House, Rep. Sam Graves, the top Republican on the transportation panel, said Republicans would be open to a larger package as long as it didn't greatly add to the national debt.

But many lawmakers oppose an increase in the federal gas tax, one way to help pay for the spending, while groups such as the Chamber of Commerce argue against increasing taxes on companies during a pandemic.

White House aide Cedric Richmond, a former congressman from Louisiana, told state transportation officials the president intends for most of the spending to be paid for, not added to the debt. In part, this would be by reversing some of the Trump administration tax cuts.

Ed Mortimer, a vice president at the U.S. Chamber of Commerce, said removing items in last year's infrastructure bill for renovating schools and low-income housing could lower the price tag, because the COVID relief measure passed by the House already has hundreds of billions of dollars for those purposes.

“Affordable housing, school construction, very meritorious, but we’re not sure that that’s a key focus that’s going to get a bill signed into law," Mortimer said.

Biden economic plan to focus 1st on infrastructure this week