Gareth Bale scored twice to lift Tottenham to a 4-0 rout of Burnley on Sunday in a morale-boosting victory for a Tottenham team which had lost five of its previous six Premier League games.

Bale gave Tottenham the lead after just 68 seconds, knocking in a cross from Son Heung-min after defender James Tarkowski missed a chance to intercept.

Bale played in Harry Kane to make it 2-0 in the 15th minute and Tottenham was cruising when Lucas Moura added a third goal off Sergio Reguilon's cross.

Bale scored his second in the 55th when Son spotted the Welsh forward had been left completely alone by the Burnley defense on the right flank. Bale took one touch to control the ball and another to curl it with his left foot past goalkeeper Nick Pope.

It was the sort of performance Tottenham fans had hoped for when Bale was signed back from Madrid on a season-long loan in September. Instead, they had to watch as Bale was hampered by injuries and Jose Mourinho's decision to play Bale mostly in the cup competitions and Europa League, with Sunday marking only the third time he had started in the Premier League this season. The last time Bale scored twice in a game was for Madrid against Villarreal in 2019. He hasn't scored for the Spanish club since.

After Bale was substituted in the 70th, Pope stopped Tottenham from scoring a fifth, scooping one powerful shot from Kane over the bar and palming another from Son around the post. Kane missed from close range in stoppage time. 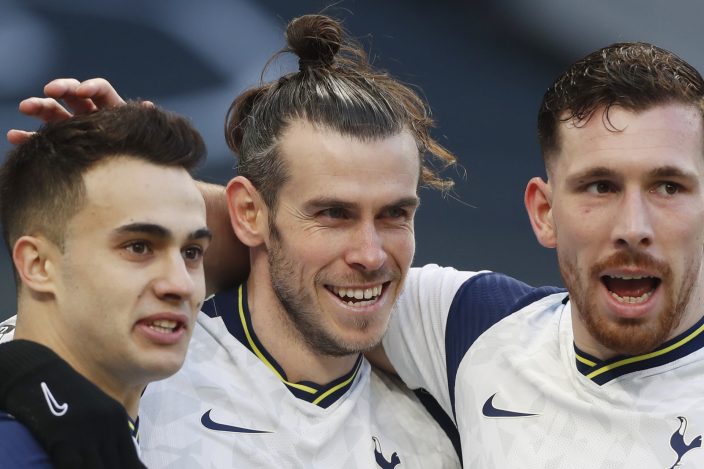 Tottenham moved above Aston Villa to eighth with the win, the team's biggest margin of victory in the Premier League since beating Manchester United 6-1 in October. Burnley is 15th, five points above the relegation zone, and with one win from its last eight league and cup games.