Patrick Kane scored his 400th career goal, Kevin Lankinen made a career-high 44 saves and the Chicago Blackhawks closed out a successful February in style, beating the Detroit Red Wings 7-2 on Sunday night.

Kane and Alex DeBrincat got loose for a 2-on-1 midway through the third period. The 32-year-old Kane kept the puck, waited for sprawled Detroit defenseman Filip Hronek to slide by him and then beat Thomas Greiss on the stick side for his team-best 11th of the season.

Kane pumped both of his arms after becoming the 100th NHL player to reach 400 goals. The three-time Stanley Cup champion is the fourth player in franchise history to reach the milestone, joining Hall of Famers Bobby Hull and Stan Mikita and longtime star Steve Larmer. 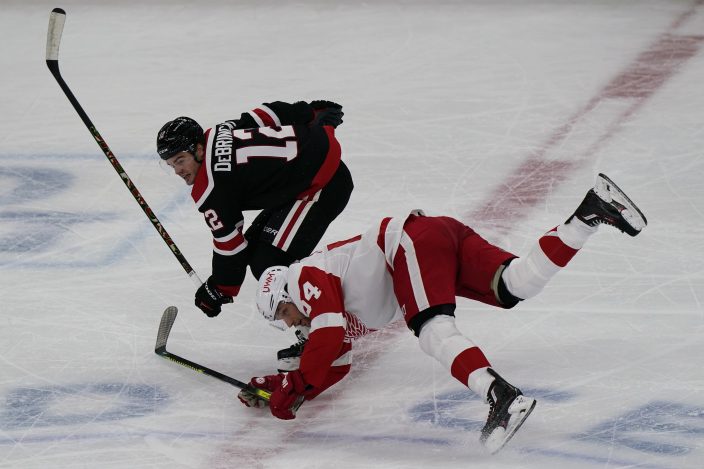 Detroit Red Wings' Bobby Ryan, right, falls down on the ice as he and Chicago Blackhawks Alex DeBrincat chase the puck during the first period of an NHL hockey game in Chicago, Sunday, Feb. 28, 2021. (AP PhotoNam Y. Huh)

Bouncing back nicely from a 5-3 loss to the Red Wings on Saturday night, the Blackhawks closed out a 9-3-1 February with their third win in four games.

Evgeny Svechnikov scored for the second straight game for Detroit, which had won two in a row. Sam Gagner also scored. 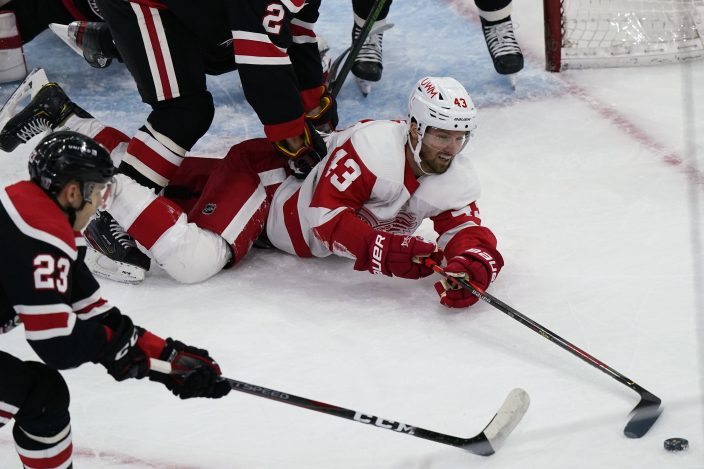 The Red Wings played without captain Dylan Larkin for the second straight game because of an upper-body injury. They went 5-8-1 in February.

Chicago jumped in front on Nikita Zadorov's first goal since he scored three times for Colorado in the playoffs last year. The 6-foot-6 defenseman, who was acquired in an October trade with the Avalanche, got a pass from David Kampf and beat Greiss from the high slot 11:41 into the first.

The Blackhawks then caught a break when Carpenter's shot went off Red Wings defenseman Alex Biega in front and was inadvertently kicked in by a scrambling Greiss, making it 2-0 with 2:47 left in the opening period. 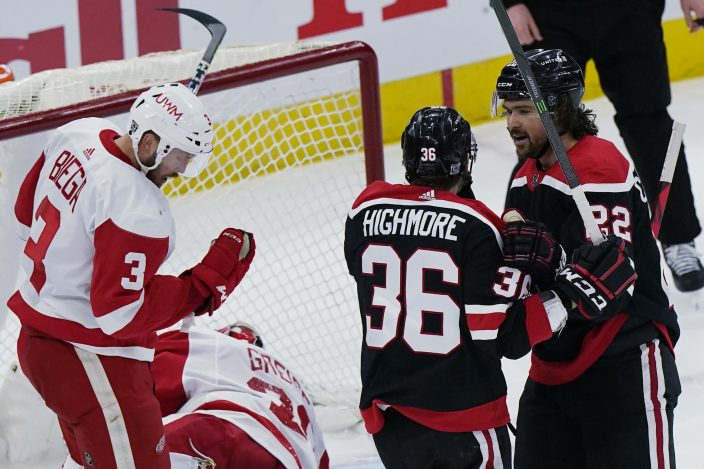 The Red Wings, who put 21 shots on net in the first, got one back when Gagner redirected Jon Merrill's shot past Lankinen with 2:09 to go. It was Gagner's fourth goal in three games after he had a hat trick in Detroit's 5-2 victory against Nashville on Thursday night. 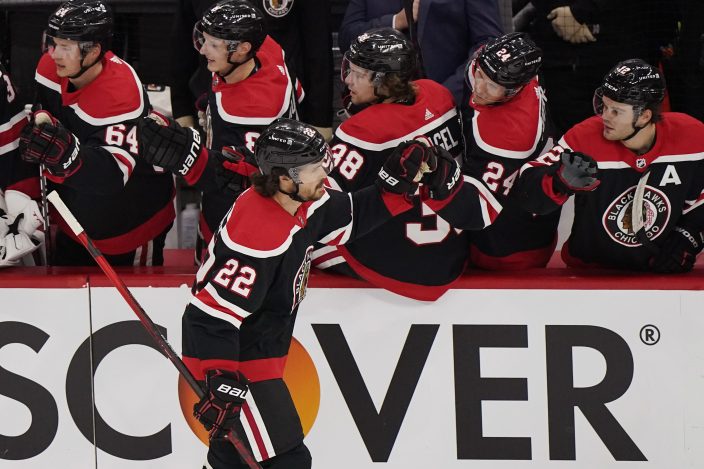 Chicago Blackhawks' Ryan Carpenter (22) celebrates with teammates after scoring a goal against the Detroit Red Wings during the first period of an NHL hockey game in Chicago, Sunday, Feb. 28, 2021. (AP PhotoNam Y. Huh)

Blackhawks: Open a three-game series against the Tampa Bay Lightning on Thursday night.