India has expanded its COVID-19 vaccination drive beyond health care and front-line workers, offering the shots to older people and those with medical conditions that put them at risk.

Those now eligible to be vaccinated include people older than 60, as well as those over 45 who have ailments such as heart disease or diabetes that make them vulnerable to serious COVID-19 illness. The shots will be given for free at government hospitals and will also be sold at over 10,000 private hospitals at a fixed price of 250 rupees, or $3.40, per shot.

Among the first to be inoculated on Monday was Prime Minister Narendra Modi. Modi, who is 70, got the shot at New Delhi’s All India Institute of Medical Science. He appealed for all to get vaccinated, tweeting afterward, “together, let us make India COVID-19 free!” 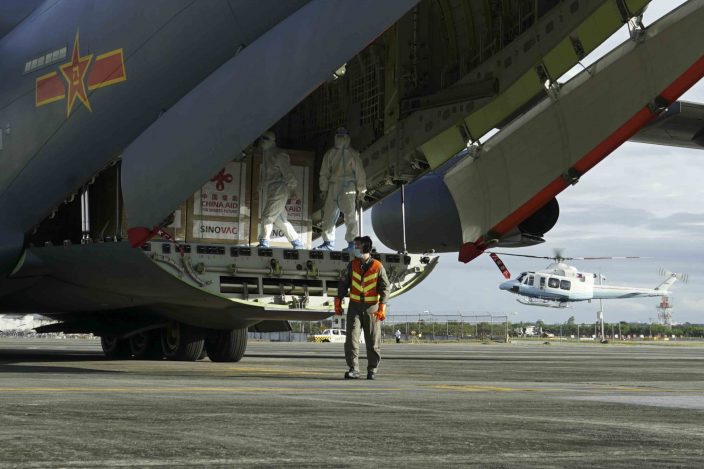 In this photo provided by the Malacanang Presidential Photographers Division, a Chinese military plane carrying Sinovac vaccines from China arrives at the Villamor Air Base in Manila, Philippines on Sunday Feb. 28, 2021. The Philippines received its first batch of COVID-19 vaccine Sunday, among the last in Southeast Asia to secure the critical doses despite having the second-highest number of coronavirus infections and deaths in the hard-hit region. (King RodriguezMalacanang Presidential Photographers Division via AP)

The country of nearly 1.4 billion people started one of the world’s largest vaccination drives in January, but the rollout has been sluggish.

New coronavirus infections are increasing again after months of consistent decline, and scientists have detected worrisome variants of the virus that they fear could hasten infections or render vaccines or treatments less useful. Vaccinating more people is a priority, with India’s Health Ministry on Sunday urging states “not to lower their guard” and “squander away the gains of the collective hard work of the last year.”

India has recorded more than 11 million cases, second in the world behind the United States, with over 157,000 deaths in the country from COVID-19.

In other developments around the Asia-Pacific region:

— The Philippines has launched a vaccination campaign to contain one of Southeast Asia’s worst coronavirus outbreaks. The drive, however, faces supply problems and public resistance. Cabinet officials, along with health workers and military and police personnel, were among the first to be vaccinated in six hospitals Monday in Metropolitan Manila, after President Rodrigo Duterte and other top officials received 600,000 doses on Sunday of COVID-19 vaccine donated by China. The Philippines was among the last Southeast Asian countries to receive its first batch of vaccine due to delivery delays even though it has reported more than 576,000 infections, including 12,318 deaths, the second-highest totals in Southeast Asia after Indonesia. Lockdowns and quarantine restrictions have set back Manila’s economy in one of the worst recessions in the region and sparked unemployment and hunger.