Devin Booker scored 21 of his season-high 43 points in the third quarter to carry Phoenix in a 118-99 victory over the Minnesota Timberwolves on Sunday night, the 14th win for the Suns in their last 17 games.

Booker hit 15 of 26 shots from the floor, repeatedly blowing by his defenders for smooth pullup jumpers and traffic-beating, twisting layups for the 13th 40-point game of his brilliant six-year career.

The two-time All-Star Game pick — each as an injury replacement — went 12 for 13 from the free-throw line for the surging Suns (22-11). They moved into a third-place tie in the Western Conference with the Los Angeles Clippers (24-12). 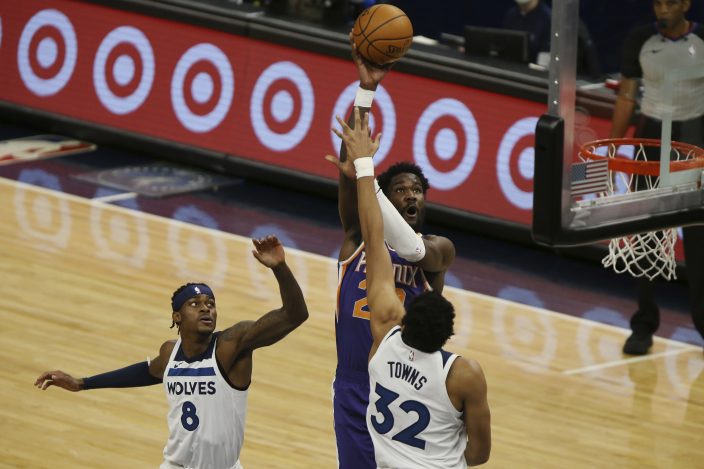 DeAndre Ayton added 22 points and 10 rebounds, and Chris Paul had 11 points and 15 assists for the Suns, who outscored the Timberwolves 42-25 over the final 14 minutes.

Anthony Edwards made a 3-pointer for Minnesota to cut the lead to 76-74 with 2:18 remaining in the third quarter, but Booker assisted on a 3-pointer by Cameron Johnson on the next possession and scored seven more points himself before the end of the period.

Edwards scored 24 points on 8-for-22 shooting for the Timberwolves, who were doing a decent job of defending everybody but Booker until fading hard down the stretch in new coach Chris Finch's first home game. Minnesota has allowed 518 points in four games under Finch. 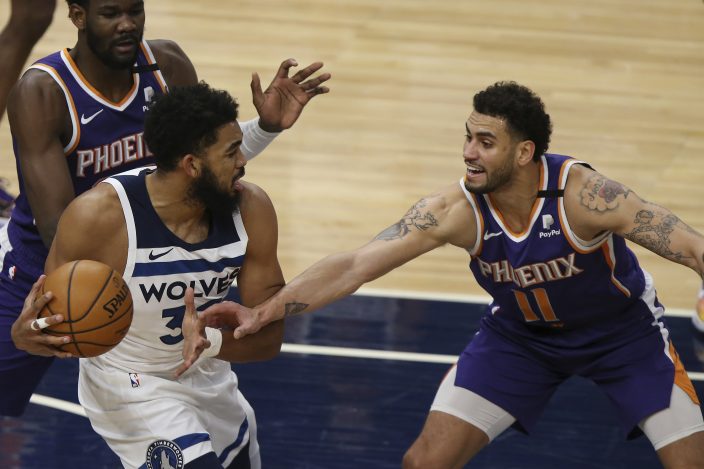 Minnesota Timberwolves's Karl-Anthony Towns (32) tries to maintain control of the ball against Phoenix Suns' Abdel Nader (11) in the first half of an NBA basketball game Sunday, Feb. 28, 2021, in Minneapolis. (AP PhotoStacy Bengs)

Karl-Anthony Towns had 21 points and 10 rebounds for the Timberwolves (7-27), who lost their eighth straight game. The worst team in the NBA finished the month of February at 2-14.

Frank Kaminsky — who had nine points in 16 minutes — took the first turn at power forward for the Suns, continuing an alternation with Jae Crowder. The Suns are 10-1 with Kaminsky starting. 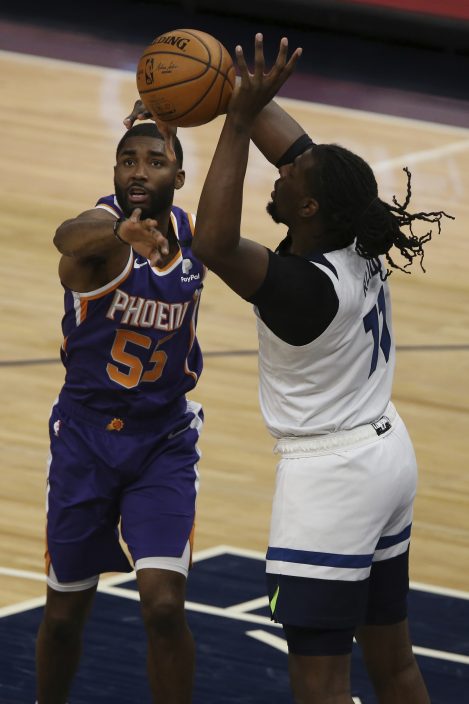 Minnesota Timberwolves's Naz Reid (11) goes after the ball against Phoenix Suns' E'Twaun Moore (55) in the first half of an NBA basketball game Sunday, Feb. 28, 2021, in Minneapolis. (AP PhotoStacy Bengs)

“Their mentality is whatever it takes to win. That's who they are,” coach Monty Williams said.

Suns: Dario Saric, who missed the last game with a sprained right ankle, had 13 points in 16 minutes against one of his two former teams. ... Crowder was scoreless in 27 minutes.

Timberwolves: Ricky Rubio, playing against the Suns for the first time since he was traded to Oklahoma City for Paul and acquired by Minnesota two days later, had six points, six assists and three steals. Rubio was the team's fourth-leading scorer in his only season with Phoenix. ... Jake Layman scored 11 points off the bench.