Tina Fey asked the tough question 10 minutes into the three-hour Golden Globes broadcast Sunday: Could this whole night have been an email? Well, maybe.

We wouldn’t have gotten to see the awkwardness of Daniel Kaluuya’s acceptance speech (almost) cut before it began, Don Cheadle giving a tie-dyed sweatshirt clad Jason Sudeikis the wrap-up signal, or Catherine O’Hara’s husband playing her off with his iPhone — a funny bit hampered by bad sound.

But we also wouldn’t have gotten to tear up along with Chadwick Boseman’s widow Taylor Simone Ledward or see the sweetness of Mark Ruffalo’s kids standing proudly behind him when he won, or Ethan Hawke’s sitting with him when he didn’t. 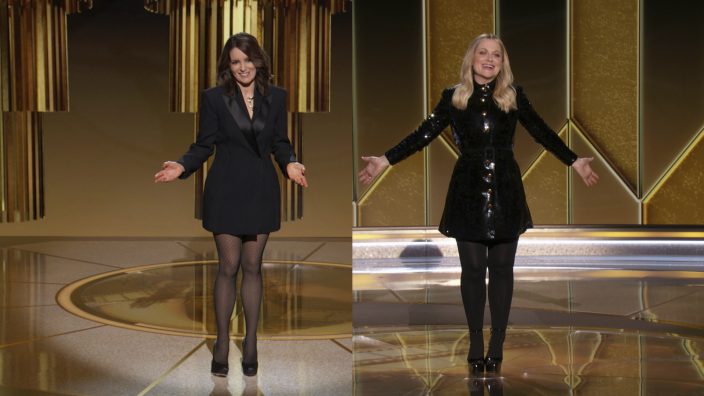 We also wouldn’t have gotten swept away by Norman Lear’s heartfelt remarks. It helped that Lear’s setup looked professionally produced. Many did not. Celebrities, we’ve all learned over the past year, have bad lighting and shoddy internet connections too, even on an awards show night.

The 78th Annual Golden Globes came in limping Sunday, not just because of the strangeness of producing a live, bicoastal show a year into a pandemic, but because in the week leading up to the event, the 87-person organization behind the endeavor, the Hollywood Foreign Press Association, was given an unflattering spotlight in a series of exposes in The Los Angeles Times and The New York Times. The most stinging revelation was that there are zero Black members in their ranks.

Whether or not they would address it was perhaps the biggest question going into the night. Hosts Fey and Amy Poehler said they needed to change. And three members of the HFPA came out on stage to say they intended to. The remoteness of it all allowed them to control the controversy on their own terms, or at least manage it. For the show, it was a silver lining. For the audience, it felt like a punt. In a normal year, every nominee and guest would have been asked about it on the red carpet. All the celebrities who posted that Time’s Up message on their socials would have had to say something. Sunday, there was no one to ask. The HFPA may have just bought themselves another year to get their act together.

Although their nominations are occasionally absurd, the ultimate winners often aren’t. “Nomadland” director Chloé Zhao became the first woman to win best director since Barbra Streisand in 1984. Boseman won too. As did “Minari” and Lee Isaac Chung (who also shared an especially sweet moment with his young daughter), even if it was relegated to the foreign language category. Kate Hudson, who proved to be a trouper despite all the fun made of her nomination and film, did not. Unfortunately, as the night wore on, more and more winners found themselves played off by the show, including most of “The Crown.” Worse, the cut off music was bad.

The evening had its inspired comedic moments too, most of which came from hosts Fey and Poehler who in their fourth time leading the show seamlessly played off of one another with almost 3,000 miles between them. Though it was easy to forget that they were on different coasts, they were always ready with a well-timed gag acknowledging that they weren’t. They also mocked the weirdness of it all, about halfway through exhaustedly recapping the meager GIF and meme moments thus far — Cheadle, Tracy Morgan mispronouncing “Soul” as sal and Sudeikis’ hoodie.

“Those are the messy things we love about the Globes,” Poehler said.

The show has always been touted as a party, boozy, glamourous and unruly with hosts who are welcome to poke fun and occasionally even cross the line. The booziness perhaps has been overstated of late — most are far too savvy to get drunk on camera before their category. Besides, that’s what the after parties are for. But there was a lot lost here, even as the show tried to manufacture moments between the nominees with awkward semi-public five-way conversations before commercial breaks.

“This is so weird,” said Lily Collins, to the heads on the five disconnected screens around her. She could have been speaking for all of us.

Cutting away to the nominees after a joke or a related win was rarely successful and often stilted, although the later categories seemed to learn from the mistakes of the earlier ones. But it made it even more frustrating that the show failed to use their in-person talent more creatively. Yes, Kristen Wiig and Annie Mumolo got a fun “Barb and Star” moment, as did Maya Rudolph and Kenan Thompson. But they also got Tiffany Haddish to show up and all she got was one quip about Eddie Murphy’s mansions. The NBC tie-ins, too, seemed more shameless than usual.

The Golden Globes have in years past been a frivolity that's still a pretty watchable, star-studded show. It occasionally even captured the zeitgeist in surprisingly meaningful ways. Audiences expect the worst and sometimes find it. But there are also grace notes in all the silliness— remember the sea of black to support the newly formed Time’s Up a few years ago and that Oprah speech? And maybe it’s that tension that has kept the Globes audience relatively stable. Whether or not this year will hold up when the numbers come in remains to be seen, but it would be a surprise. And does it matter? It’s not as though anyone involved is planning to relive this experience.

“We all know that awards shows are stupid,” Fey said early on.

Yes, they are. But maybe it’s just the stupidity we all need after a very tough year.