In an industrial neighborhood on the outskirts of Bangladesh’s largest city lies a factory with gleaming new equipment imported from Germany, its immaculate hallways lined with hermetically sealed rooms. It is operating at just a quarter of its capacity.

It is one of three factories that The Associated Press found on three continents whose owners say they could start producing hundreds of millions of COVID-19 vaccines on short notice if only they had the blueprints and technical know-how. But that knowledge belongs to the large pharmaceutical companies who produce the first three vaccines authorized by countries including Britain, the European Union and the U.S. — Pfizer, Moderna and AstraZeneca. The factories are all still awaiting responses.

Across Africa and Southeast Asia, governments and aid groups, as well as the WHO, are calling on pharmaceutical companies to share their patent information more broadly to meet a yawning global shortfall in a pandemic that already has claimed nearly 2.5 million lives. Pharmaceutical companies that took taxpayer money from the U.S. or Europe to develop inoculations at unprecedented speed say they are negotiating contracts and exclusive licensing deals with producers on a case-by-case basis because they need to protect their intellectual property and ensure safety. 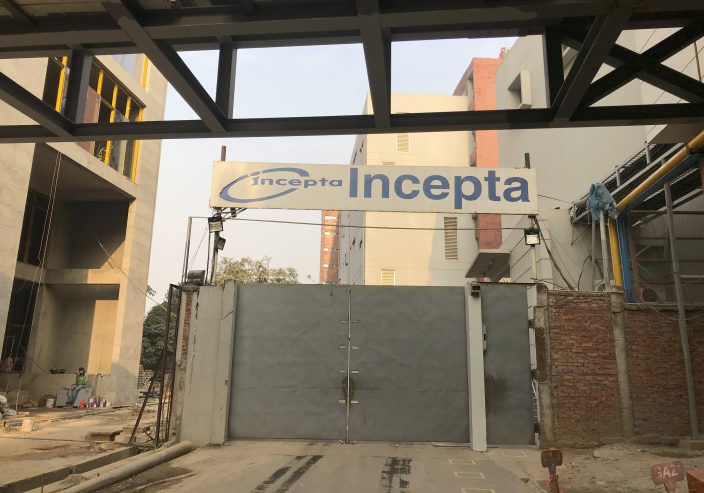 The gates to the Incepta plant on the outskirts of Dhaka in Bangladesh Saturday Feb. 13, 2021. It is one of three factories that The Associated Press found on three continents whose owners say they could start producing hundreds of millions of COVID-19 vaccines on short notice if only they had the blueprints and technical know-how. (AP PhotoAl-emrun Garjon)

Critics say this piecemeal approach is just too slow at a time of urgent need to stop the virus before it mutates into even deadlier forms. Last month, WHO called for vaccine manufacturers to share their know-how to “dramatically increase the global supply.”

“If that can be done then immediately overnight every continent will have dozens of companies who would be able to produce these vaccines,” said Abdul Muktadir, whose Incepta plant in Bangladesh already makes vaccines against hepatitis, flu, meningitis, rabies, tetanus and measles.

All over the world, the supply of coronavirus vaccines is falling far short of demand, and the limited amount available is going to rich countries. Nearly 80% of the vaccines so far have been administered in just 10 countries, according to WHO. More than 210 countries with a collective population of 2.5 billion haven’t received a single shot. 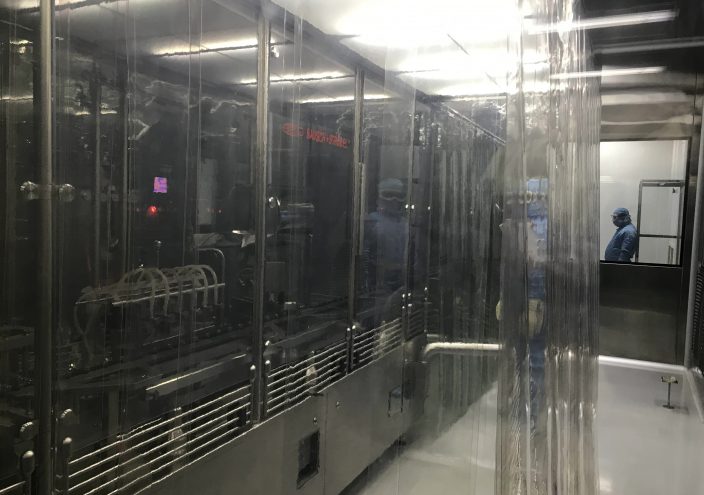 Production personnel observe the filling operation inside the Incepta plant on the outskirts of Dhaka in Bangladesh Saturday Feb. 13, 2021. It is one of three factories that The Associated Press found on three continents whose owners say they could start producing hundreds of millions of COVID-19 vaccines on short notice if only they had the blueprints and technical know-how. (AP PhotoAl-emrun Garjon)

The deal-by-deal approach also means that some poorer countries end up paying more for the same vaccine than richer countries. South Africa, Mexico, Brazil and Uganda all pay different amounts per dose for the same AstraZeneca vaccine — more than governments in the European Union, according to studies and publicly available documents. AstraZeneca said in an email that the price of the vaccine will differ depending on factors such as production costs, where the shots are made and how much countries order.

“What we see today is a stampede, a survival of the fittest approach, where those with the deepest pockets, with the sharpest elbows are grabbing what is there and leaving others to die,” said Winnie Byanyima, executive director of UNAIDS.

In South Africa, home to the world’s most worrisome COVID-19 variant, the Biovac factory has said for weeks that it’s in negotiations with an unnamed manufacturer with no contract to show for it. And in Denmark, the Bavarian Nordic factory has capacity to spare and the ability to make more than 200 million doses but is also waiting for word from the producer of a licensed coronavirus vaccine. 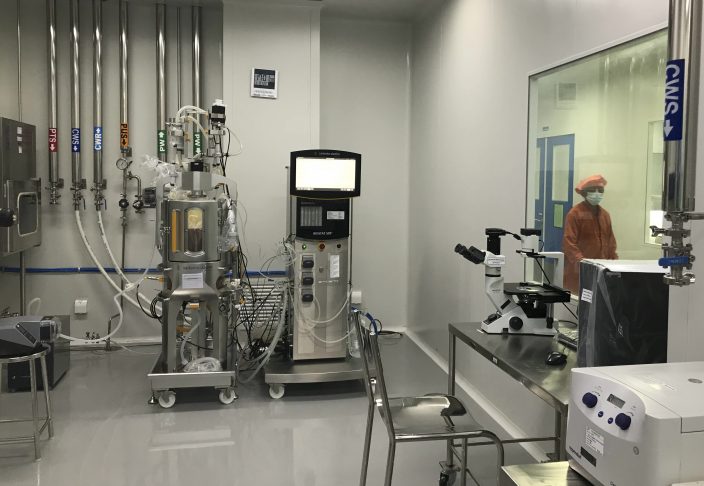 A member of production personnel walks in a corridor past a room containing a Disposable 50L Bioreactor (STR50) System with peristaltic pumps and an Inverted Microscope inside the Incepta plant on the outskirts of Dhaka in Bangladesh Saturday Feb. 13, 2021. (AP PhotoAl-emrun Garjon)

Governments and health experts offer two potential solutions to the vaccine shortage: One, supported by WHO, is a patent pool modeled after a platform set up for HIV, tuberculosis and hepatitis treatments for voluntary sharing of technology, intellectual property and data. But not a single company has offered to share its data or transfer the necessary technology.

The other, a proposal to suspend intellectual property rights during the pandemic, has been blocked in the World Trade Organization by the United States and Europe, home to the companies responsible for creating the vaccines described as the best way to stop the spread of coronavirus. That drive has the support of at least 119 countries among the WTO's 164 member states, and the African Union, but is adamantly opposed by vaccine makers.

Pharmaceutical companies say that instead of lifting IP restrictions, rich countries should simply give more of the vaccines they have to poorer countries through COVAX, the public-private initiative WHO helped create for equitable vaccine distribution. The organization and its partners delivered its first doses last week — in very limited quantities. 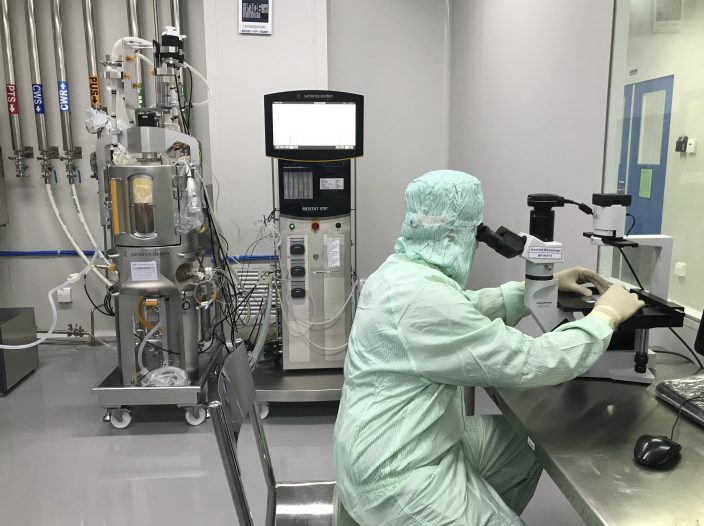 A member of production checks cell growth and viability of a bioreactor sample under an inverted microscope inside the Incepta plant on the outskirts of Dhaka in Bangladesh Saturday Feb. 13, 2021. (AP PhotoAl-emrun Garjon)

But rich countries are not willing to give up what they have. Earlier this month, Ursula Von der Leyen, head of the European Commission, used the phrase “global common good” to describe the vaccines. However, by the end of the week, the European Union had imposed export controls on vaccines, giving countries the power to stop shots from leaving their borders in some cases.

The long-held model in the pharmaceutical industry is that companies pour in huge amounts of money and research in return for the right to reap profits from their drugs and vaccines. At an industry forum last May, Pfizer’s CEO Albert Bourla described the idea of sharing IP rights widely as “nonsense” and even “dangerous.” AstraZeneca’s chief Pascal Soriot said that if intellectual property is not protected, “there is no incentive for anybody to innovate.”

Thomas Cueni, director general of the International Federation of Pharmaceutical Manufacturers, called the idea of lifting patent protections “a very bad signal to the future. You signal that if you have a pandemic, your patents are not worth anything.” 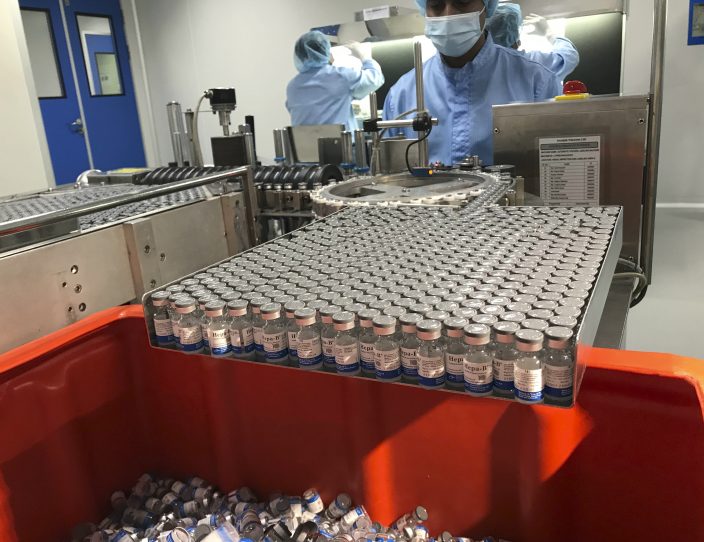 Production personnel perform the labeling operation of inspected vaccine vials inside the Incepta plant on the outskirts of Dhaka in Bangladesh Saturday Feb. 13, 2021. (AP PhotoAl-emrun Garjon)

Advocates of sharing vaccine blueprints argue that, unlike with most drugs, taxpayers paid billions to develop vaccines that are now “global public goods” and should be used to end the biggest public health emergency in living memory.

“People are literally dying because we cannot agree on intellectual property rights,” said Mustaqeem De Gama, a South African diplomat who has been deeply involved in the WTO discussions.

Paul Fehlner, the chief legal officer for biotech company Axcella and a supporter of the WHO patent pool board, said governments that poured billions of dollars into developing vaccines and treatments should have demanded more from the companies they were financing from the beginning.

“A condition of taking taxpayer money is not treating them as dupes,” he said.

In a Feb. 3 interview with the Journal of the American Medical Association, Dr. Anthony Fauci, the leading pandemic expert in the United States, said all options need to be on the table, including increasing aid, improving production capacity in the developing world and working with pharmaceutical companies to relax their patents.

“Rich countries, ourselves included, have a moral responsibility when you have a global outbreak like this,” Fauci said. “We’ve got to get the entire world vaccinated, not just our own country.”

It’s hard to know exactly how much more vaccine could be made worldwide if intellectual property restrictions were lifted, because the spare production capacity of factories has not been publicly shared. But Suhaib Siddiqi, former director of chemistry at Moderna, said that with the blueprint and technical advice, a modern factory should be able to get vaccine production going in at most three to four months.

“In my opinion the vaccine belongs to the public,” said Siddiqi, who is still active in the field. “Any company which has experience synthesizing molecules should be able to do it.”

Back in Bangladesh, the Incepta factory tried to get what it needed to make more vaccines in two ways, by offering its production lines to Moderna and by reaching out to a WHO partner. Moderna did not respond to multiple requests for comment about the Bangladesh plant, but its CEO, Stéphane Bancel, told European parliamentarians that the company’s engineers are fully occupied on expanding production in Europe.

“Doing more tech transfer right now could actually put the production and the increased output for the months to come at great risk,” he said. “We are very open to do it in the future once our current sites are running.”

Muktadir said he was also in discussions last May with CEPI, or the Coalition for Epidemic Preparedness Innovations, one of WHO’s partners in a global effort to buy and distribute COVID-19 vaccines fairly, but nothing came of it. CEPI spokesman Tom Mooney said the talks last year with Incepta didn’t raise interest, but that CEPI is still in discussions “about matchmaking opportunities including the possibility of using Incepta’s capacity for second wave vaccines.”

Muktadir said he fully appreciates the extraordinary scientific achievement involved in the creation of vaccines this year, wants the rest of the world to be able to share in it, and is willing to pay a fair price.

“Nobody should give their property just for nothing,” he said. “A vaccine could be made accessible to people — high quality, effective vaccines.”