In the opening moments of a Golden Globes night even more chaotic and confounding than usual, co-host Tina Fey raised a theoretical question: “Could this whole night have been an email?” Only the next three hours would tell.

Well, sure, it could have been an email. But then you wouldn't have had Chadwick Boseman’s eloquent widow, bringing many to tears as she explained how she could never be as eloquent as her late husband. Or Jane Fonda, sharply calling out Hollywood for its lack of diversity on a night when her very hosts were under fire for exactly that. Or Chloé Zhao, making history as the first woman of Asian descent to win best director (and the first woman since 1984.)

Or 99-year-old Norman Lear, giving the simplest explanation for his longevity: never living or laughing alone. Or Jodie Foster kissing her wife joyfully, eight years after very tentatively coming out on the same telecast. 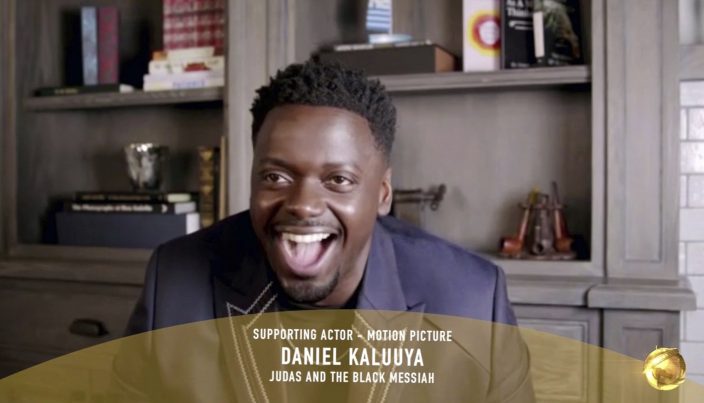 In this video grab issued Sunday, Feb. 28, 2021, by NBC, Daniel Kaluuya accepts the award for best supporting actor in a motion picture for "Judas and the Black Messiah" at the Golden Globe Awards. (NBC via AP)

Of course, there were the usual confounding results and baffling snubs, compounded here by some epic Zoom fails. But then we had the kids and the dogs. And they were adorable.

Next year, can we still have the kids and the dogs, please?

Some key moments of the first and hopefully last virtual Globes night: 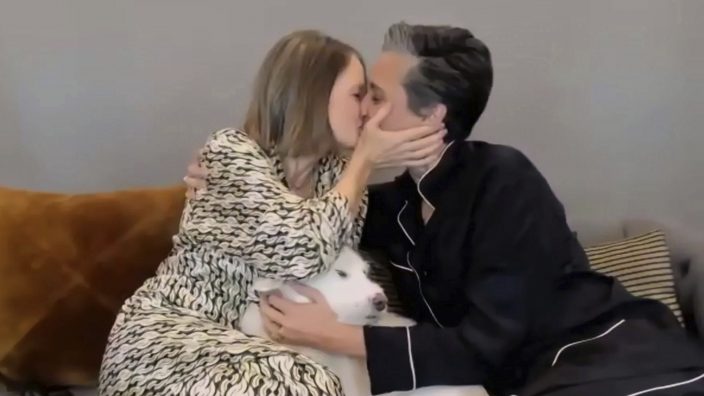 In this video grab issued Sunday, Feb. 28, 2021, by NBC, Jodie Foster, left, holding her dog Ziggy, kisses her wife Alexandra Hedison as she accepts the award for best supporting actress in a motion picture for "The Mauritanian" at the Golden Globe Awards. (NBC via AP)

The evening began under a cloud of embarrassing revelations about the Hollywood Foreign Press Association and its lack of inclusion, including the damaging fact that there are no Black members in the 87-person body. Fey and co-host Amy Poehler addressed it early: “Even with stupid things, inclusivity is important." Winners like Daniel Levy of “Schitt's Creek” and presenters like Sterling K. Brown referred to it. Jane Fonda made it a theme of her powerful speech accepting the Cecil B. DeMille award. And the HFPA made a hasty onstage pledge to change. “We recognize we have our own work to do,” said vice president Helen Hoehne. “We must have Black journalists in our organization.”

“I DON'T HAVE HIS WORDS”

The best-actor award to Chadwick Boseman for “Ma Rainey's Bottom” had been expected. That did not dull the emotional impact of his victory. His widow, Taylor Simone Ledward, tearfully accepted in his honor, telling viewers that her husband, who died of colon cancer at 43 before the film was released, “would say something beautiful, something inspiring, something that would amplify that little voice inside of all of us that tells you you can. That tells you to keep going, that calls you back to what you are meant to be doing at this moment in history.” But, she said poignantly, “I don't have his words." Co-star Viola Davis could be seen weeping as Ledward spoke. She was not alone.

It was obvious there were going to be awkward Zoom fails. It started early, when the very first winner, Daniel Kaluuya for “Judas and the Black Messiah,” was on mute as he accepted his award, leaving presenter Laura Dern to apologize for technical difficulties. Thankfully, the problem was resolved in time for the actor to speak. Jason Sudeikis, whose charmingly rambling speech ("This is nuts!") and rumpled hoodie signaled he hadn't expected to win, finally realized he needed to “wrap this puppy up.” And winner Catherine O'Hara ("Schitt's Creek") had some perhaps unwelcome help from her husband, whose efforts to provide applause sounds and play-off music on his phone while she spoke lost something in translation, causing confusion on social media. Oh yes, and there were those conversations between nominees before commercials — did they know we heard them?

Still, the virtual acceptances from winners stuck at home had a huge silver lining: happy kids and cute pets. When Mark Ruffalo won for “I Know This Much is True,” two of his teens could not control their joy enough to stay out of the camera shot. Not to be outdone, the adorable young daughter of Lee Isaac Chung, writer-director of the Korean-American family drama “Minari,” sat in his lap and hugged him throughout his acceptance for best foreign language film. “She’s the reason I made this film,” said Chung. Winner Jodie Foster ("The Mauritanian") also had a family member in her lap: her dog. Also seen: Sarah Paulson's dog, and Emma Corrin's cat.

LOVE FOR BORAT, SNUB FOR BAKALOVA ... AND EXPOSURE FOR GIULIANI

Bulgarian actress Maria Bakalova, breakout star of Amazon’s “Borat Subsequent Moviefilm,” had been widely expected to win, but lost out to Rosamund Pike ("I Care a Lot") who saluted Bakalova's bravery. In her movie, Pike said, “I had to swim up from a sinking car. I think I still would rather do that than have been in a room with Rudy Giuliani.” The former New York mayor's infamous cameo was also the butt of jokes from “Borat” star Sacha Baron Cohen, who called Giuliani “a fresh new talent who came from nowhere and turned out to be a comedy genius ... I mean, who could get more laughs from one unzipping?” Baron Cohen, who won for best actor in a comedy, also joked that Donald Trump was “contesting the result” of his win.

Did you expect anything less from Fonda? In her memorable DeMille award speech, the multiple Globe winner extolled the virtues of cinematic storytelling — “stories can change our hearts and our minds” — then pivoted to admonishing Hollywood. “There's a story we’ve been afraid to see and hear about ourselves,” she said, “a story about which voices we respect and elevate and which we tune out: a story about who’s offered a seat at the table and who’s kept out of the rooms where decisions are made.” She said the arts should not merely keep step with society, but lead the way. “Let's be leaders,” she said.

When Zhao won best director for her haunting and elegant “Nomadland,” she was the first Asian American woman ever to win that award. But that wasn't the only way she made history: it was the first directing Globe for a woman in nearly 40 years, since Barbra Streisand won for “Yentl." Her film, a look at itinerant Americans, “at its core for me is a pilgrimage through grief and healing,” Zhao said. “For everyone who has gone through this difficult and beautiful journey at some point in their lives, we don’t say goodbye, we say: See you down the road.” With Zhao's win, the road widens for other female directors.