Hong Kong democracy supporters are being locked up in jail, charged with being a threat to national security.

Their arrests come under a new security law imposed on the semi-autonomous Chinese territory by Beijing that has largely silenced dissent in Hong Kong. China says the city needs stability after months of anti-government protests in 2019. Those now facing charges held a primary election for legislators picked through one of the last vestiges of direct democracy in Hong Kong.

Some key questions about the arrests: 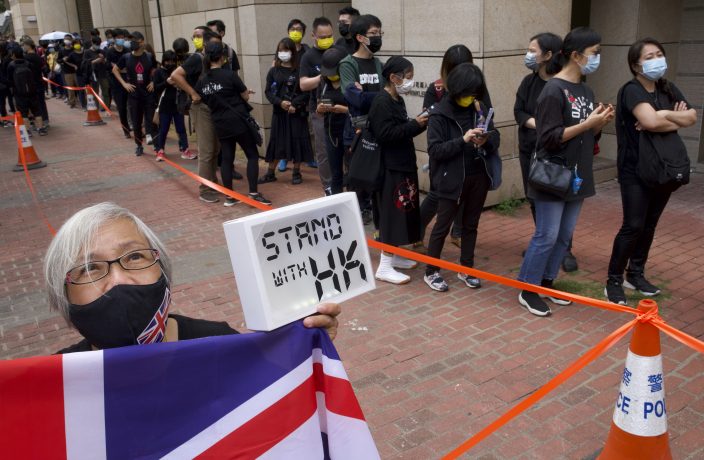 A woman holds a placard and a U.K. flag, as supporters queue up outside a court to try to get in for a hearing in Hong Kong Monday, March 1, 2021. Hong Kong police on Monday brought 47 pro-democracy activists to court on charges of conspiracy to commit subversion under the national security law imposed on the city by Beijing last year. (AP PhotoVincent Yu)

HOW CAN A PRIMARY ELECTION THREATEN NATIONAL SECURITY?

Authorities say the primary was part of a plan to paralyze the government and undermine state power. The security law criminalizes attempts to subvert government, as well as secession, terrorism and collusion with foreign powers.

As evidence, police pointed to an opinion piece, “10 steps to mutual destruction,” that was published in the Apple Daily, a newspaper supportive of the democracy movement. 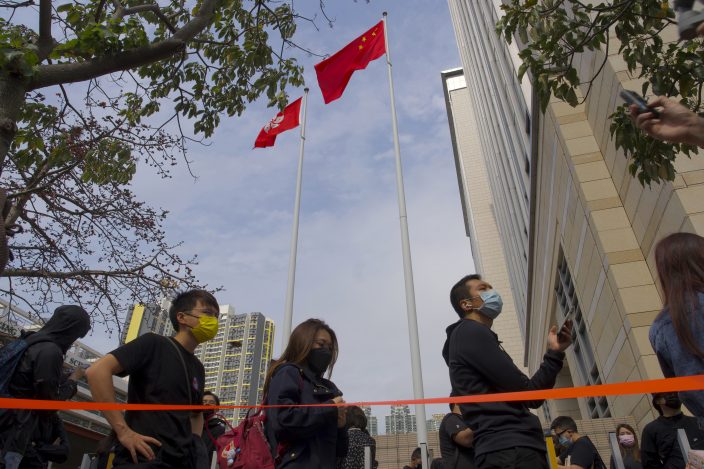 Supporters queue up under a China national flag outside a court as they try to get in for a hearing in Hong Kong Monday, March 1, 2021. People gathered outside the court Monday to show support for 47 activists who were detained over the weekend under a new national security law that was imposed on the city by Beijing last year. (AP PhotoVincent Yu)

Authored by Benny Tai, a veteran activist and former law professor, it mapped out a strategy that began with winning a legislative majority. Following that, opposition legislators would intensify protests, block the budget twice to force Hong Kong leader Carrie Lam to resign and back international sanctions against China’s ruling Communist Party.

The primary was an attempt to galvanize public support for pro-democracy candidates, though it's unclear whether all the candidates agreed with Tai's manifesto.

Police initially rounded up 55 people in January on suspicion of subversion. Of those, 47 were charged with that crime on Sunday. It's unclear whether the other eight remain under investigation and will be charged in the future.

Those charged include former lawmakers and others who were candidates in the primary. It is by far the largest number of people targeted in a case so far under the national security law, which took effect last June.

WHAT HAPPENED TO DEMOCRACY IN HONG KONG?

The pro-democracy faction was set to make gains in the 2020 legislative election and possibly even take a majority. The latter was an uphill battle, though, as only half of the 70 seats in the legislature are directly elected by voters. The rest represent various interest groups.

Lam scrapped the election, citing the risks of holding one during the coronavirus pandemic. Activists said the pro-Beijing majority feared losing seats.

China's central government signaled last week that it may take steps to restrict who can run for office in Hong Kong. The city's leader is selected by a China-controlled committee of 1,200 electors, and candidates must be approved by Beijing. However, a small percentage of those are drawn from directly elected district council members, and Beijing appears unwilling to continue allowing them to have a say in the selection process.

Xia Baolong, director of the Hong Kong and Macao Affairs Office of the State Council, said Hong Kong could only be ruled by “patriots,” excluding those who lobby other countries for foreign sanctions and “troublemakers.”

The electoral changes are expected to be discussed and possibly passed at the annual meeting of China's National People’s Congress, which starts Friday.