Political tensions in Armenia further heightened Monday with supporters of the embattled prime minister and the opposition planning massive rival rallies in the capital.

Prime Minister Nikol Pashinyan has faced opposition demands to resign since he signed a peace deal in November that ended six weeks of intense fighting with Azerbaijan over the Nagorno-Karabakh region. The Russia-brokered agreement saw Azerbaijan reclaim control over large parts of Nagorno-Karabakh and surrounding areas that had been held by Armenian forces for more than a quarter-century. 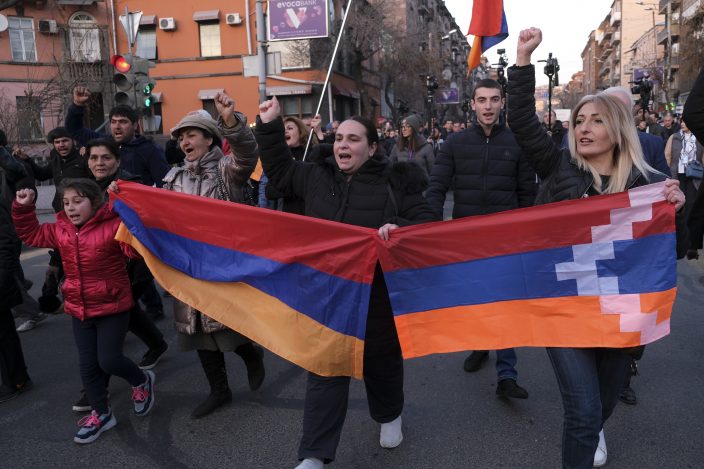 Opposition demonstrators carrying Armenian national and the separatist region of Nagorno-Karabakh’s flag, right, march to the government buildings during a rally to pressure Armenian Prime Minister Nikol Pashinyan to resign in Yerevan, Armenia, Saturday, Feb. 27, 2021. The developments come after months of protests sparked by the nation's defeat in the Nagorno-Karabakh conflict with Azerbaijan. (Hrant KhachatryanPAN Photo via AP)

The spat was sparked by Pashinyan firing a deputy chief of the military's General Staff who laughed off his claim that only 10% of Russia-supplied Iskander missiles that Armenia used in the conflict exploded on impact.

Pashinyan quickly resubmitted the demand for the general's ouster, and his allies warned Monday that the president could be impeached if he fails to endorse the move. 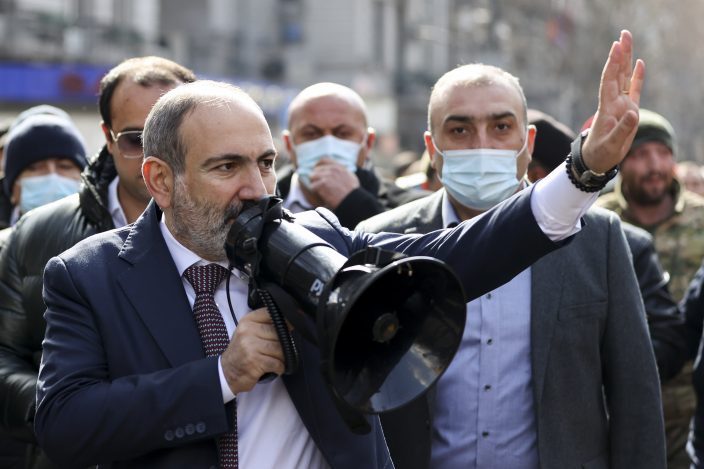 Armenian Prime Minister Nikol Pashinyan speaks through a loudspeaker during a rally in the central in Yerevan, Armenia, Thursday, Feb. 25, 2021. Armenia's prime minister accused top military officers on Thursday of attempting a coup after they demanded he step down, adding fuel to months long protests calling for his resignation following the nation's defeat in a conflict with Azerbaijan over the Nagorno-Karabakh region. (Tigran MehrabyanPAN Photo via AP)

Amid the escalating tensions, a group of protesters broke into a government building in central Yerevan on Monday to press their demand for Pashinyan's resignation, but left shortly after without violence. Later on Monday, Pashinyan's supporters and the opposition plan rival rallies in the Armenian capital.

Pashinyan, a former journalist who came to power after leading massive street protests in 2018 that ousted his predecessor, still continues to enjoy broad support despite the country's humiliating defeat in Nagorno-Karabakh and the opposition calls for his resignation.

The prime minister defended the peace deal as a painful but necessary move to prevent Azerbaijan from overrunning the entire Nagorno-Karabakh region, which lies within Azerbaijan but was under the control of ethnic Armenian forces backed by Armenia since a separatist war there ended in 1994. The fighting with Azerbaijan that erupted in late September and lasted 44 days has left more than 6,000 people dead. Russia has deployed about 2,000 peacekeepers to monitor the Nov. 10 peace deal. 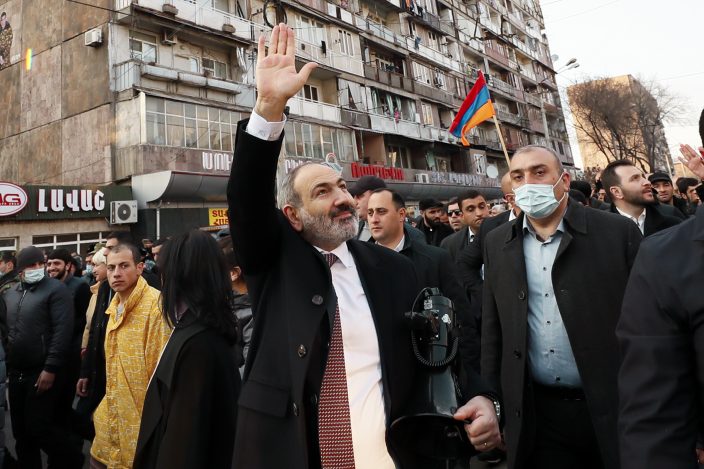 Armenian Prime Minister Nikol Pashinyan waves to supporters during a rally in his support in the center of Yerevan, Armenia, Thursday, Feb. 25, 2021. Armenia's prime minister has spoken of an attempted military coup after facing the military's General Staff demand for him to step down. The developments come after months of protests sparked by the nation's defeat in the Nagorno-Karabakh conflict with Azerbaijan. (Tigran MehrabyanPAN Photo via AP)

Armenia has relied on Moscow’s financial and military support and hosts a Russian military base — ties that will keep the two nations closely allied regardless of the outcome of the political infighting.

Last week, the Russian Defense Ministry rebuked the Armenian leader for debasing the Iskander missile, a state-of-the-art weapon touted by the military for its accuracy, saying it was “bewildered” to hear Pashinyan’s claim because the Armenian military hadn’t fired an Iskander missile during the conflict.

In a bid to repair the damage, Pashinyan rescinded his statement Monday, acknowledging that he made the statement after being misled.