For years, Boston city leaders have vowed to diversify the police department so it looks more like the community it serves. Yet the police force is just as white as it was a decade ago, and huge barriers to diversity remain, advocates say.

City officials acknowledge more work needs to be done, but insist their efforts to bring in more officers of color are slowly paying off. But critics say the city has failed to back up its pledges with meaningful action.

Black and Latinx candidates still consistently get passed over in favor of white applicants over decades-old minor brushes with law enforcement or seemingly arbitrary reasons, advocates say. And some critics say the city's talk of inclusion rings hollow while it continues to fight a long-running case won by a group of Black officers over a promotional exam a judge found was discriminatory. 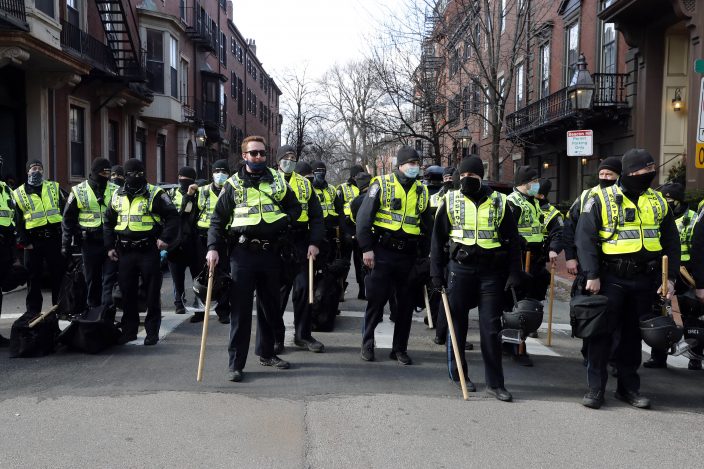 FILE - In this Jan. 17, 2021, file photo, Boston police officers stand in a street in the Beacon Hill neighborhood near the Statehouse in Boston as a precaution against demonstrations following the breach of the U.S. Capitol earlier in the month. Boston's police department remains largely white, despite vows for years by city leaders to work toward making the police force look more like the community it serves. (AP PhotoMichael Dwyer, File)

"It's an honor to serve as a police officer and serve the citizens of Boston, but to this day, I don’t feel like I have been completely accepted," said Larry Ellison, a Black Boston police detective who's been with the department for nearly 40 years. “The problem is we turn a blind eye and then when things explode, we try to do things piecework and we try to do symbolic things."

The need to have police departments look like the communities they patrol has come under renewed focus amid calls for police reform spurred by police killings of Black people across the U.S. And new research recently published in the journal “Science” suggested that diversity in law enforcement can indeed lead to improvements in how police treat people of color.

William Gross, Boston's first Black top cop, said diversifying the department was one of his top priorities when he took the reins in 2018. Yet, as of early January, Boston police were about 65% white, according to numbers provided by the department, even though they make up only about 45% of the city. The percentage of officers of color is up slightly compared to 2018, but the racial makeup of the overall force is largely the same as 10 years ago and only slightly more diverse than 20 years ago, according to data compiled in a 2015 audit of the department.

The Associated Press repeatedly requested an interview with Gross, who retired in late January, but a police spokesman said he was unavailable.

His replacement, Dennis White, the second Black man to lead the police force, was placed on leave days after he was sworn in after The Boston Globe raised questions about 20-year-old domestic violence allegations. Superintendent-in-Chief Gregory Long, who is white, is leading the department while lawyers investigate the allegations. 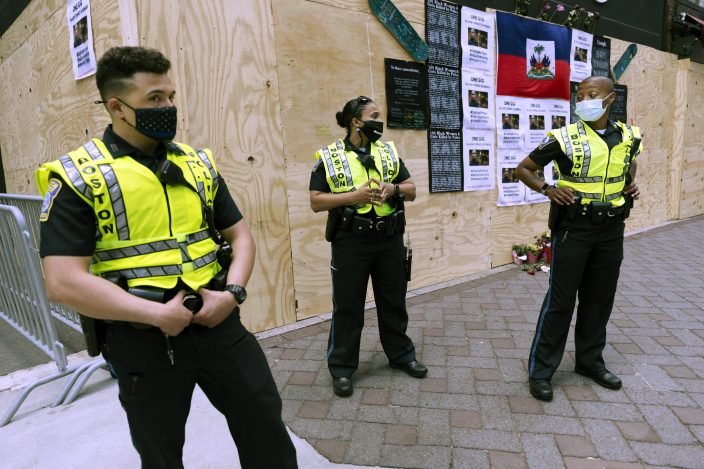 FILE - In this June 6, 2020, file photo, Boston Police officers stand in front of messages about George Floyd posted on a boarded-up business in Downtown Crossing in Boston. The city's police department remains largely white, despite vows for years by city leaders to work toward making the police force look more like the community it serves. Advocates say Black and Latino candidates still consistently get passed over in favor of white applicants. (AP PhotoMichael Dwyer, File)

A group of minority officers and local ministers have called on White to be reinstated while the investigation continues, and one minister has called White's treatment a “racial double standard.”

Jeff Lopes, a Boston officer who leads the Massachusetts Association of Minority Law Enforcement Officers, said they saw some progress under Gross’ leadership in getting more officers of color into specialized units and other important roles. Gross' command staff was roughly 50% people of color, but many ranks remain overwhelmingly white.

A 1974 consent decree forced the department to diversify, and the percentage of minority officers climbed from 12% in 1981 to 25% a decade later. A judge lifted the consent decree in 2004, when more than 40% of patrol officers were Black, Hispanic or Asian. Today, the patrol force is around 38% people of color. 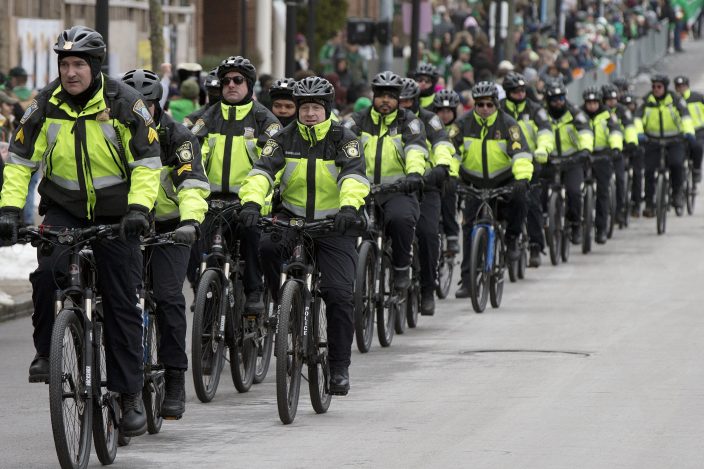 FILE - In this March 19, 2017, file photo, Boston Police patrol on bicycles during the annual St. Patrick's Day Parade in Boston. The city's police department remains largely white, despite vows for years by city leaders to work toward making the police force look more like the community it serves. (AP PhotoMichael Dwyer, File)

Some argue there won't be significant progress without overhauling or opting out entirely of the civil service system, under which military veterans — who are overwhelmingly white in Massachusetts — get a hiring preference over others.

The city has taken steps in recent years aimed at addressing the issue, like reinstating a cadet program in order to get a more diverse pool of officer candidates. In December, the city council passed a measure to give a hiring preference to Boston high school graduates in the hopes of boosting diversity. But the proposal still needs to be approved by state lawmakers. 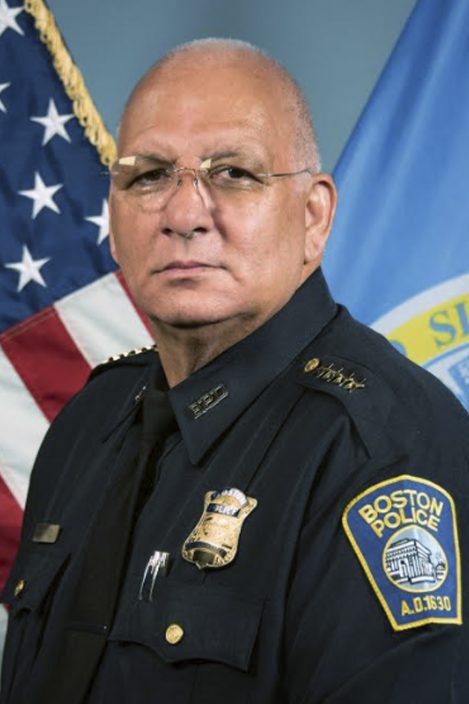 FILE - This undated file photo provided by the City of Boston shows Dennis White, sworn in Monday, Feb. 1, 2021, as the 43rd Commissioner of the Boston Police Department, succeeding William G. Gross, who retired. But White was suspended two days later, pending the investigation of a 1999 domestic violence allegation. (City of Boston via AP, File)

The city says its efforts are paying off. The current group of cadets are about two-thirds Black or Hispanic, said Michael Gaskins, the department’s diversity recruitment officer. The last several recruit classes were about 35% to 45% people of color, which Gaskins said is up from previous years. Roughly 54% of police applicants in 2019 were minorities, up from 51% two years earlier.

Gaskins said it “will take a little bit of time to catch up," but said they are committed to hiring officers reflective of the community they serve.

“We would like more change but we are happy with our progress and the incremental changes that have been made thus far. But we are not done,” Gaskins said. Some question the city's commitment to diversity while it continues in court to fight a group of Black officers officers who said a lieutenants' promotional exam discriminated against minorities. A federal judge found the 2008 exam had a disparate impact on minority candidates and last year ruled the officers are entitled to back pay. The city is appealing.

A spokesman for Mayor Marty Walsh, Nick Martin, declined to comment on the case because it is ongoing. But Martin said the mayor, who's been tapped to be President Joe Biden's labor secretary, worked diligently with Gross to work toward diversifying the police force.

“Is there more progress to be made? Of course. But it would be a disservice to the hard work of the community, the Mayor, and the Police Department not to acknowledge all of the progress that’s occurred under this administration,” Martin said.

Sophia Hall, an attorney who has represented applicants in cases against the department, said candidates of color continue to get passed over for reasons that appear to be arbitrary or “just flat out discriminatory."

Last year, the state’s Civil Service Commission found the department unfairly bypassed a Black applicant over a case, which was ultimately dismissed. Meanwhile, the department hired three other candidates — who were all white — with multiple and more recent criminal offenses on their record, the commission found.

The commission ordered that man be put at the top of the list of potential hires. He entered the police academy at the end of November.

Gaskins said there’s no data to support the idea that there are racial biases in hiring decisions.