The audience watching the searing and provocative “Slave Play” on Broadway often caught a glimpse of themselves onstage — in more ways than one.

That's because set designer Clint Ramos had built giant mirrors behind the actors, who initially appear to be on a plantation in the pre-Civil War South. Ramos, as he has done hundreds of time before, wanted to pull people into the raw story being told.

“It always starts at an emotional response,” says Ramos, who is head of design and production at Fordham University. “It’s always driven by this sense to find the human.” 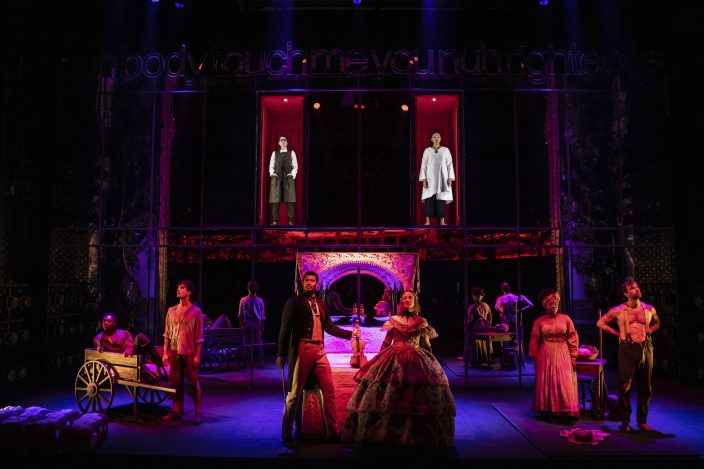 The cast of "Slave Play" appears during a performance in New York. For his striking scenic design in "Slave Play," set designer Clint Ramos has earned a 2021 Tony Award nominations. He also received a nod for best costume design for “The Rose Tattoo.” (Matthew MurphyDKC O&M Co. via AP)

For that striking scenic design, Ramos has earned one of two 2021 Tony Award nominations. He also got a nod for best costume design for “The Rose Tattoo.”

“Slave Play” director Robert O’Hara says Ramos always hopes to elevate the onstage work, scouring the script for design clues. He remembers the moment Ramos came up with the idea of mirrors.

“In talking with Clint about how we can get audience interaction — in terms of seeing themselves watching this and seeing each other watch this experience — he came up with this idea of mirrors, which was quite extraordinary,” O'Hara says. 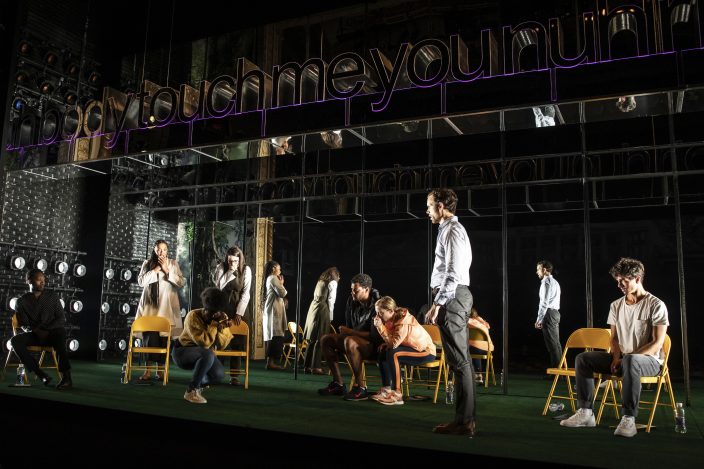 The cast of "Slave Play" appears during a performance in New York. For his striking scenic design in "Slave Play," set designer Clint Ramos has earned a 2021 Tony Award nominations. He also received a nod for best costume design for “The Rose Tattoo.” (Matthew MurphyDKC O&M Co. via AP)

Ramos studied both scenic and costume design at New York University’s Tisch School of the Arts and was initially hired primarily for costumes. Then his set designs took off, too.

“It’s never been an either/or,” he says. “I’ve always been interested in the bigger picture. What do the inhabitants of that world look like? It’s never been as siloed, as I think most people think.”

He has designed sets or costumes for hundreds of theater, opera and dance productions, including Broadway's “Burn This” with Adam Driver and Keri Russell, “Six Degrees of Separation” with Allison Janney, “Sunday in the Park With George” with Jake Gyllenhaal and “The Elephant Man” with Bradley Cooper.

It was Ramos' idea to dress Oscar-winner Lupita Nyong’o in a filthy “Rugrats” T-shirt for Danai Gurira's powerful play “Eclipsed.” Nyong’o was playing a teen who had been abducted and enslaved in a rebel compound during a bloody civil war in Africa.

“How are Broadway audiences ever going to identify with this person?” Ramos asked himself. His answer was a discarded T-shirt from America featuring an animated children’s TV series.

It instantly connected the girl with the audience — and yet with heartbreak, recognizing a discarded soul. “It gave me an opportunity to be poetic about the destruction of innocence,” Ramos says. He won a Tony for it, becoming the first person of color to win in the costume category.

Ramos faced a similar dilemma with “Slave Play,” Jeremy O. Harris’ bracing work about an antebellum fantasy therapy workshop that explores the legacy of slavery in sexual dynamics. Ramos wanted the audience to be uncomfortable voyeurs.

"How can I make it so that a white person or a Black person or any other within that spectrum feels a level of discomfort?” he asked. “It occurred to me that if I just did a whole bank of mirrors, I could literally surround the actors with the audience.”

The effect was enhanced by the fundamental fact of who usually pays for tickets on the Great White Way. “This being a Broadway theater, the faces that are going to be reflected are going to be mostly white,” he said.

While theaters may be shuttered, Ramos' work will be seen in “Respect,” the upcoming biopic of Aretha Franklin starring Jennifer Hudson. He was tasked with crafting 80 costumes for The Queen of Soul and had to dress 1,000 people to recreate a 1968 Madison Square concert.

His love of theater traces back to his childhood in the Philippines, where he experienced street theater in rallies against the Marcos regime. “I saw the power that it could do. I still remember very vividly,” he says.

He likes working collaboratively, with everyone in different jobs offering their visions and ideas. When he's hired, everyone gets his input.

“Part of what I’ve learned is that there are just things that I cannot possibly see. And then there are things that I see that other people don’t," he says. "So, for me, it’s been sort of a spiritual journey learning that.”

Ramos has long been an activist for an equitable landscape in theater and film for Black, indigenous and people of color. During the pandemic, he helped found Design Action, a coalition advocating for change.

In the 2018-2019 theatrical season, 91% of Broadway design slots were filled with white designers. Ramos hopes Broadway gets to the point when half of all designers are non-white.

“It is the right thing to do, but it actually will make the theater better,” he says. “We really need to do a lot of things off stage. And that, to me, is where I am and I want to put my focus.”