Many nights growing up, some combination of the Staveley-Taylor sisters huddled on the staircase to listen when their parents invited friends over and took out guitars to sing Bob Dylan or Crosby, Stills and Nash songs.

They were supposed to be in bed.

Let that be a lesson, parents. Kids are always absorbing things, and you never know if it will change their lives.

Today, Emily, Jessica and Camilla Staveley-Taylor perform together in their own band, the Staves, characterized by the celestial harmonies of three sisters who grew up blending their voices.

“There was always music on in the house,” said 31-year-old Camilla, the youngest of the trio. “Our parents were very musical. They could sing and harmonize and we soaked that in. I don't really remember a time when we didn't sing together.”

The sisters' first gig, when Camilla was only 14, came at the Horn pub in their native Watford, a town in Hertfordshire, England. Family and friends heard them cover songs by Neil Young, Joni Mitchell, the Beatles and Norah Jones. 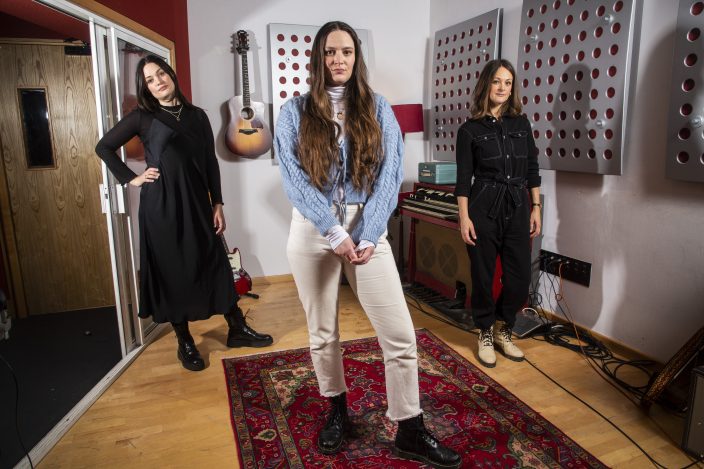 Members of the folk group The Staves, sisters, from left, Jessica, Camilla and Emily Staveley-Taylor pose in a north London recording studio to promote their album "Good Woman", on Monday, Feb. 15, 2021. (Photo by Joel C RyanInvisionAP)

“I think everyone we had ever met came down,” said Jessica, 34. “We had done our most successful show and it was the first time in our lives. We thought, ‘This is great, we can pretty much take over the world now.’”

About a decade ago, their educations complete, the sisters decided to take a stab at a career in music.

Most popular at home in England, the Staves released their third album, “Good Woman,” last month after a long and rough layoff. It's lyrically and sonically bolder than the more stately folk sound typified by the aching beauty of “No Me, No You, No More” on a 2015 album produced by Justin Vernon, aka Bon Iver. 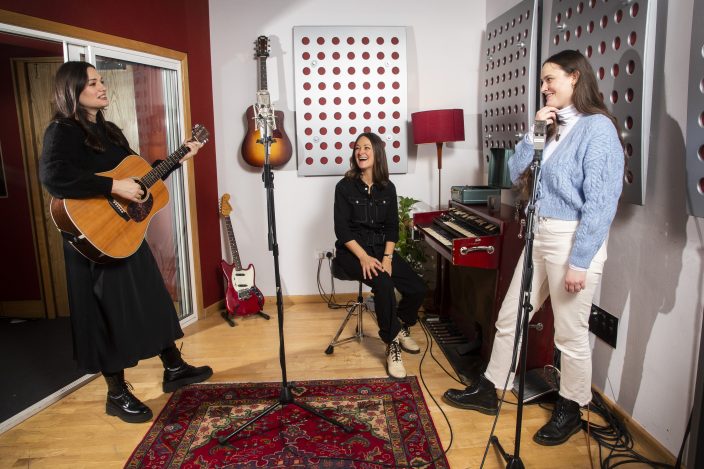 The voices remain ever central, however.

The Haim sisters are a modern-day comparison, although Haim's sound is sunnier, California pop-rock. A more apt reference point is the American trio of Maggie, Terre and Suzzy Roche, first active in the 1970s.

All three Staveley-Taylor sisters write music, although older sister Emily, 37, took on more of an editor's role recently since becoming a mom in 2019 (tending to her daughter, Emily sat out a Zoom interview with The Associated Press). To avoid arguments, all songs are credited to the Staves. 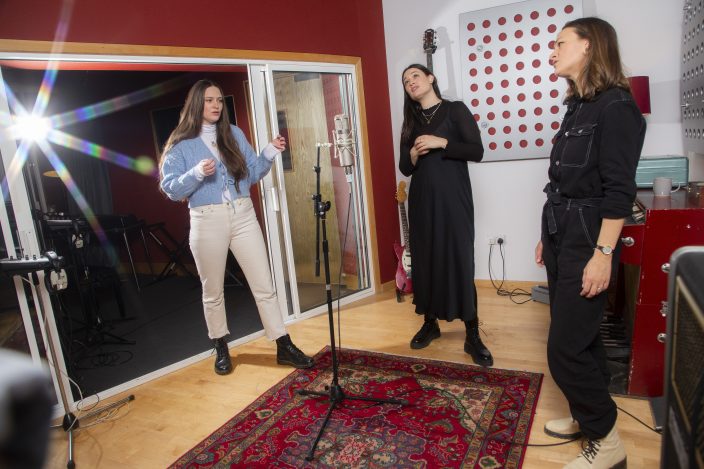 Middle sister Jessica most often sings the melody, with Camilla taking the high harmonies and Emily low. They mix it up a bit on “Good Woman,” including some unison singing.

“We always kind of feel that until the others can fit into a song, only then does it become a Staves song,” Jessica said. “If not, maybe it's for another project.”

The sisters have spent some time in the United States, moving briefly to Nashville in their early days, and to Minnesota near Vernon when they made an album with him.

“Every time we'd go and do something in America, our friends would say, ‘Have you broken America?'" Jessica said. “They think it would be like the Beatles coming in to JFK.”

The Staves weren't planning on a near six-year wait between albums. Their mother, Jean, died in the summer of 2018, two weeks after their grandmother died. Camilla, who had stayed behind in Minnesota, saw a long-term relationship break up and she, too, headed back to England.

“We just felt very alone and very at sea,” Jessica said. “It ended up that we just needed some time away to be a family and not worry about being a band, and to look after each other. In an annoying way, we just sort of imposed a lockdown on ourselves.”

With that break came a crisis in confidence. Did they even want to do this anymore? What kind of band did they want to be? Would Emily still want to be a part of it? Were the songs they had written any good?

They had intended to make “Good Woman” themselves, but instead called in producer John Congleton for some perspective. His enthusiasm proved infectious.

Most of these life experiences are evident in the new songs, if you listen closely enough. Pulling through self-doubt, in a relationship or a chosen field, are themes of the title cut, “Failure” and “Paralysed.” The luminous “Sparks” references the loss of their mother.

“When you miss someone's presence, you don't really think about the huge things,” Camilla said. “You think about the small things — how someone smells, hearing the keys in the door or how their footsteps sound. At the time, that was kind of the only way we could express our sadness and how we were feeling. It would take far longer for us to zoom out and be remotely philosophical about it.”

Part of what they were trying to capture on “Good Woman” was the way their band gives the Staves a fuller, more muscular sound than is often heard in their recordings.

“We pushed ourselves and pushed the limits on certain songs of where they could go,” Jessica said. “I like the feeling of confidence and boldness. It comes, I must say, from growing older and experiencing more of life and more things that cement your sense of self... I think we found more of a voice for this record.”