Myanmar’s U.N. ambassador, who strongly opposed the military coup in his country, insists he remains the permanent representative to the United Nations, but the foreign ministry has informed the U.N. that the ambassador has been terminated and his deputy is now in charge.

The dispute over who is recognized as Myanmar’s ambassador -- the representative of the generals who carried out the Feb. 1 coup or of the ousted democratically elected government -- is under discussion and could end up in the General Assembly, where all 193 U.N. members have seats.

U.N. spokesman Stephane Dujarric confirmed Tuesday that the U.N. received two “contradictory” letters and is reviewing them to see who is the U.N. ambassador and whether the assembly’s Credentials Committee will get involved. 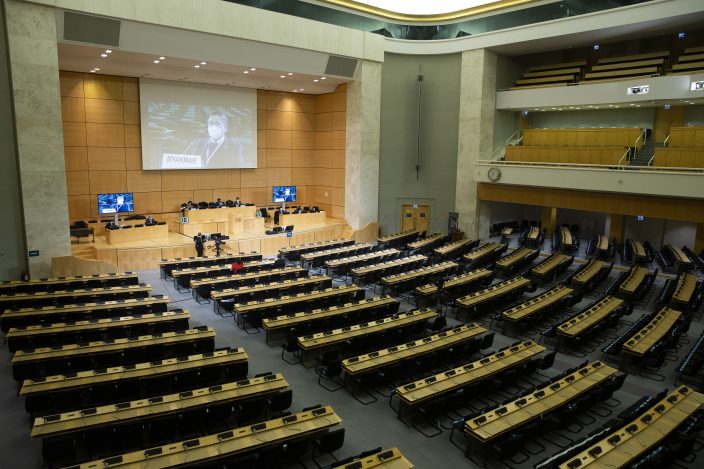 Myint Thu, ambassador of the Permanent Representative Mission of Myanmar to Geneva, is displayed on a screen as he addresses his statement during the Human Rights Council special session on "the human rights implications of the crisis in Myanmar" at the European headquarters of the United Nations in Geneva, Switzerland, Friday, Feb. 12, 2021. The special session of the Human Rights Council on the situation in Myanmar is take in person and in virtualle due to the coronavirus pandemic. (Salvatore Di NolfiKeystone via AP)

“We are in a very unique situation we have not seen in a long time,” Dujarric said. “We are trying to sort through all the legal, protocol and other implications” and are “trying to resolve things as quickly as possible from our end.”

The first letter from Ambassador Kyaw Moe Tun, sent Monday to General Assembly President Volkan Bozkir with a copy to the secretary-general, states that he was appointed by President Win Myint “who was then and remains the lawfully elected president of Myanmar” and by Foreign Minister Aung San Suu Kyi on Sept. 4, 2020.

“The perpetrators of the unlawful coup against the democratic government of Myanmar have no authority to countermand the legitimate authority of the president of my country,” Tun said in the letter obtained by The Associated Press. “I wish therefore to confirm to you that I remain Myanmar’s permanent representative to the United Nations.”

The second letter to the secretary-general from Myanmar’s Ministry of Foreign Affairs, which Dujarric said was received Tuesday, makes no mention of the coup.

Dated Feb. 28, the letter, obtained by AP, informs Guterres that the State Administration Council “terminated the duties and responsibilities” of ambassador Tun on Feb. 27 and will no longer recognize his accreditation to the U.N. General Assembly.

The ministry said Myanmar’s deputy U.N. ambassador, Tin Maung Naing, has been assigned as the charge d’affaires of the U.N. mission.

In his dramatic speech to a General Assembly meeting on Myanmar on Friday, Ambassador Tun appealed for “the strongest possible action from the international community” to restore democracy to the country.

He urged all countries to strongly condemn the coup, to refuse to recognize the military regime, and to ask the military leaders to respect the November elections won by Suu Kyi’s National League for Democracy party.

“It is time for the military to immediately relinquish power and release those detained,” including Suu Kyi and president Win Myint, he said. “We will continue to fight for a government which is, of the people, by the people, for the people.”

His speech drew loud applause from diplomats in the assembly chamber who called it “powerful,” “brave” and “courageous.”

The new U.S. ambassador, Linda Thomas-Greenfield, reiterated Monday that she was “extraordinarily moved” by Tun’s statement,and commended him for his “bravery” and “compassion.”

She said Americans “stand strongly” with the ambassador and the people of Myanmar.

“The U.S. “is committed to using our renewed engagement here in New York ... (and) internationally to press the military to reverse its actions and restore a democratically elected government,” Thomas-Greenfield said.

The General Assembly meeting was called to hear a briefing from the U.N. special envoy for Myanmar, Christine Schraner Burgener, who said it is time to “sound the alarm” about the coup.

“It is important the international community does not lend legitimacy or recognition to this regime,” she told diplomats.