Foreign Minister Pedro Brolo said the five are being interviewed about the killings, whose motive still remains unclear.

The migrants were being taken toward the U.S. border by people smugglers when one or two of the trucks came under fire, apparently from a state police unit. 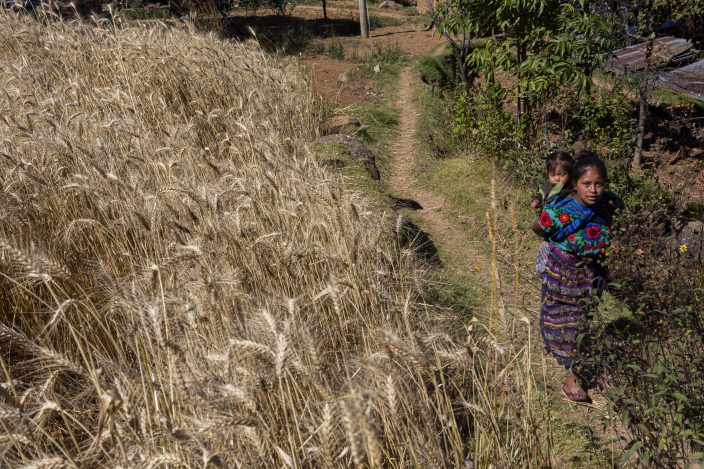 Adriana Mejia, a cousin of Guatemalan migrant Santa Cristina Garcia Perez, carries her daughter down a narrow path to her family's house in Comitancillo, Guatemala, Wednesday, Jan. 27, 2021. Relatives say they believe the charred corpses found in a northern Mexico border state on Saturday could be those of their loved ones. The country's Foreign Ministry said it was collecting DNA samples from a dozen relatives to see if there was a match with any of the bodies. (AP PhotoOliver de Ros)

But it was unclear whether the survivors had been close enough in the convoy to shed light on why police would have killed the migrants along with two armed smugglers' guards.

A dozen state police officers have been charged in the killings in the township of Camargo. Two trucks were set on fire and the victims' bodies were so badly charred that identification has taken weeks. The bodies of 16 Guatemalans and two Mexicans have been identified; the 19th body is still undergoing tests.

Brolo said the 16 bodies identified so far are expected to be returned to Guatemala around March 19. Mexican authorities asked for enough time to conduct forensic tests to strengthen their case.

The killings revived memories of the 2010 massacre of 72 migrants near the town of San Fernando in the same gang-ridden border state of Tamaulipas. Those killings were done by a drug cartel, while the Jan. 22 slayings allegedly were carried out by law enforcement.

But the two cases were similar: The 2010 massacre came to light in part because there were survivors. One, a wounded migrant from Ecuador who played dead, managed to make it to a military checkpoint.

Officials later said those migrants were killed after refusing an offer to work for a drug cartel, information that apparently came from the survivors.

Cartels in Mexico often charge migrant smugglers for crossing their territory and kidnap or kill migrants whose smugglers have paid a rival gang. Camargo is in an area that has been bloodied for years by turf battles between the remnants of the Gulf cartel and the old Zetas cartel.

Some of the relatives of the Guatemalan migrants killed on Jan. 22 told of receiving calls from the migrant smuggler who took the group of 10 males and three female north. The smuggler apparently survived, but told them their family members were dead.

The dozen officers charged in the killings were members of a 150-member Tamaulipas state Special Operations Group.

In 2019, prosecutors charged that the same police unit, then operating under a different name, pulled eight people from their homes in the border city of Nuevo Laredo, posed them in clothing and vehicles to make them look like criminals and shot them to death.

Authorities had warning of the problems in the unit, which was created last year from the remains of the special forces group accused of the 2019 killings and other atrocities. A federal legislator even filed a non-binding resolution in Mexico’s Congress in early January to protest beatings and robberies by the unit.

Dozen state police charged in the massacre of 19 in Mexico