A top European Union official pledged more support for Ukraine on Tuesday as he visited the area near the separatist conflict in the country's east.

“The EU has provided substantial support to Ukraine to mitigate the impact of the conflict, and this year we are starting a new program to support economic development and public services in these regions,” European Council President Charles Michel said after he visited the town of Shchastya in the Luhansk region together with Ukrainian President Volodymyr Zelenskiy.

He said that the EU assistance will include funding for the checkpoints near the zone of conflict. 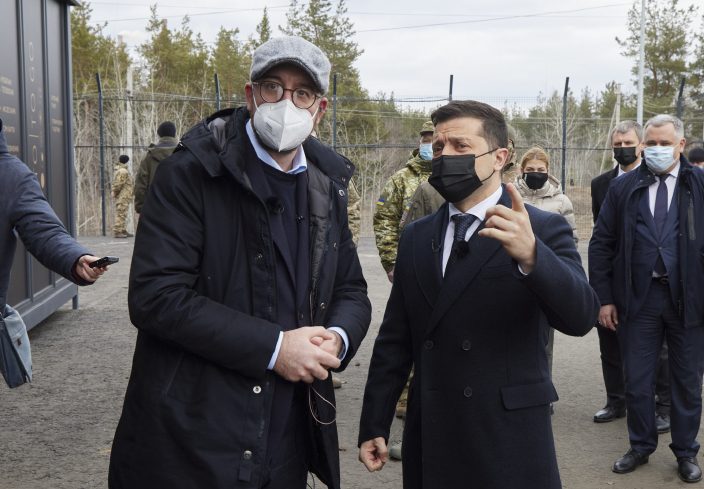 The conflict in eastern Ukraine erupted in April 2014 when Russia cast support for separatist rebels there weeks after annexing Ukraine's Crimean Peninsula. More than 14,000 people have been killed in the fighting, which also has devastated the country's industrial heartland.

Efforts to negotiate a political settlement under the 2015 Minsk agreements brokered by France and Germany have stalled.

“Unfortunately, Russia has not reciprocated Ukraine’s positive steps to implement the Minsk agreements,” Michel said. “That’s why our economic sanctions against Russia will remain in place. Russia is a party to this conflict and not a mediator.”

Zelenskiy thanked Michel, noting that his visit is a “demonstration that Ukraine doesn't remain alone."

At the same time, Michel, on his first visit to Ukraine, urged the country's government to step up efforts to combat corruption and conduct judicial reforms.

“And much needs to be done in judicial reform and the fight against corruption,” Michel said. “Ukrainian citizens deserve a judicial system that respects justice, applies it and demonstrates that there is no impunity for crimes. We will support you at every stage of your path to the rule of law and judicial reform in Ukraine.”